“When I came to the knowledge that animals were conscious, with the same level of awareness as us, it kinda shattered my whole reality… Now I’m a vegan, an animal and human rights activist. ” 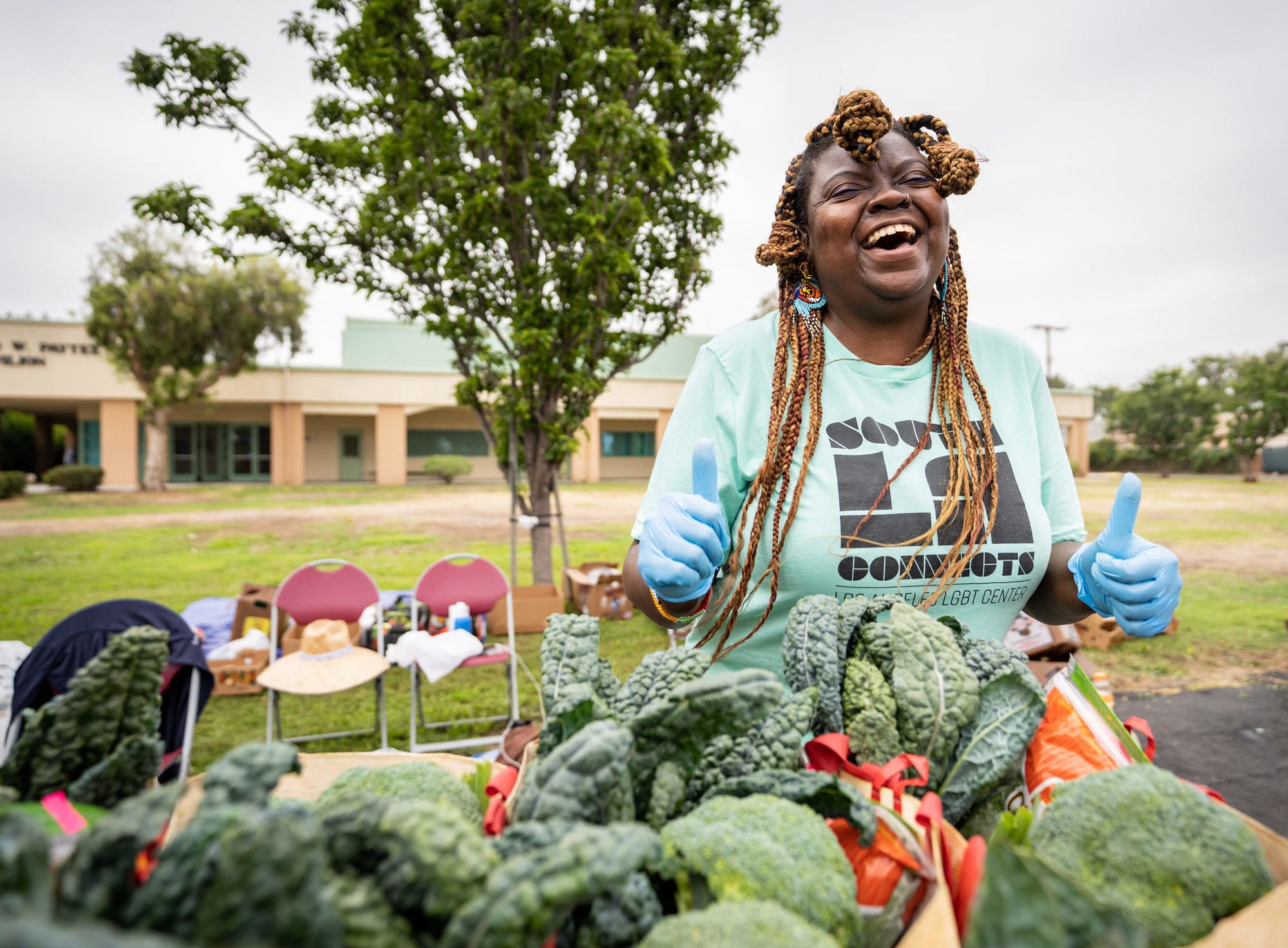 About six years ago, Gwenna Hunter found her calling as an activist. At that time, she was living in Los Angeles and working as a recruiter for IT personnel, some of whom were being employed by military contractors around the globe. Hunter remembers her moment of clarity, initially communicated to her in a dream: “I was like, ‘I don’t think I’m contributing to the world. I might be on the wrong team here,’” she says. “I was just about me: traveling, buying shoes, and living what I thought was a fulfilling life.” While she had always been acutely aware of her own spiritual journey and persistent search for meaning, she didn’t expect her change of direction to be so dramatic. “When I came to the knowledge that animals were conscious, with the same level of awareness as us, it kinda shattered my whole reality,” she says.  She also credits the particularly eye-opening experience of watching Erin Janus’ five-minute “Dairy is Scary” video with pushing her to eliminate animal products from her life.

“Now I’m a vegan, an animal and human rights activist. I’m out here coordinating events. You could have never told me this would be my life,” she says, laughing.

Gwenna Hunter stands outside a meat packing plant in silent protest during a cow vigil. Photo by Nikki Ritcher / #unboundproject / We Animals Media.

This slaughterhouse in Pico Rivera kills an estimated 1,200 cattle every week. Photo by Nikki Ritcher / #unboundproject / We Animals Media.

Hunter finds herself at the intersection of two liberation movements in the United States, and specifically Los Angeles: the liberation and empowerment of Black lives, and helping others to include all sentient creatures within their circle of empathy, primarily through the elimination of animal products from their diets.

Hunter’s work is intersectional, and she speaks to a broad range of people and communities across LA, especially within the city’s Black and brown neighborhoods. As the vegan food aid coordinator and project lead for the LA chapter of Vegan Outreach, she helps distribute fresh meals and groceries throughout greater Los Angeles. She also works directly with a host of local organizations including Black Lives Matter Los Angeles, Black Women for Wellness, Black Women Farmers of LA and LGBT Center South to extend Vegan Outreach’s distribution network of plant-based meals and groceries. She does additional outreach and education through the LA chapter of The Animal Save Movement, called Los Angeles Health Save in collaboration with a social justice organization called Downtown Crenshaw. She has even started two groups – Vegans for Black Lives Matter (2020) and Vegans of LA (2015) – to foster continuing dialogue. (Both groups have existed entirely online since the beginning of the pandemic.)

Hunter’s primary goal through this work is to help more people discover veganism, particularly those in underserved communities. By steering clear of shame tactics and instead introducing someone to a way of eating (and thinking) that considers both their stomach and their heart, she employs the same empathy that initially drew her to this work.

Gwenna Hunter, Avaion Ruth, and Kim King with Vegan Outreach stand in front of roughly 100 bags of fresh local produce given to local communities impacted by the COVID-19 crisis in Los Angeles. Photo by Nikki Ritcher / #unboundproject / We Animals Media.

“In regard to animal suffering, I always try to get people to feel something,” she says. “So if you know what it’s like to suffer, and you can stand in that place, at that moment, you don’t want anyone else to feel that either. I’ve never met anyone that doesn’t know what it feels like to suffer, in some form.”

She uses this approach to help others make empathetic connections across race, ethnicity, socioeconomic status and — in the case of veganism — species. “When someone is in that place of tenderness and thinking about their own suffering, I might inform them that a cow is pregnant for nine months, just like a human woman. And that when we take her male child for veal, that’s her son.” She consciously uses terms like “son” and “daughter” to describe animals and their relationships, to help people make connections to their own lives. “I don’t do any shaming; I did that once when I first became vegan, and it didn’t end well,” she says with a laugh.

“I came into this because of love and compassion, that’s how I want other people to experience it.” Gwenna Hunter tries to capture images and video of the cow holding area that are waiting for slaughter at a beef packing plant in Pico Rivera. Photo by Nikki Ritcher / #unboundproject / We Animals Media.

Hunter is likewise careful not to conflate animals’ emotional lives with those of humans, instead finding their common ground by applying her intuitive logic that non-human animals experience emotions like distress, pain, contentment and excitement. Why, then, would we choose not to believe that fundamental aspects of the meat and dairy industries cause them to suffer? She says she might explain to someone how artificially inseminating a female cow and taking her calf is robbing her most natural, deeply-felt instincts, and that a mother will often cry for her missing young for weeks. Why wouldn’t we believe that that mother is in distress?

“Lately I’ve started calling animals our brothers and sisters,” Hunter says. “We’ve been programmed from an early age to eat our brothers and sisters. It’s insane, and it’s no different from the blueprint we’ve used for enslaving other humans: ‘Oh, they don’t feel pain’; ‘they’re not fully human.’ It’s textbook exploitation, and we’ve just gotta be stronger and smarter. We’ve gotta help wake each other up.”

Her work aims to connect dots without creating false equivalencies, and to provide support by showing people alternatives. “I learned the hard way to never approach these conversations from the animal rights point-of-view,” she says. “If you’re not vegan yet, it’s gonna sound very weird to you to hear about animal rights— especially in the Black community, where maybe you got harassed by the police yesterday.” She says that when she talks about animal issues, she often doesn’t use the words themselves. “I talk about animals from the perspective of the blueprint for oppression — the blueprint of what slavery looks like, and how this is the same blueprint being used all over the world to exploit different marginalized groups, people and species.” Hunter also concedes that animal concerns simply may not be everyone’s window into veganism, particularly in the Black community, where more localized, personal issues like health, diet and chronic disease are often of more immediate concern. She continually works to include the ecological argument for veganism in her ongoing outreach, and believes she’s at her most effective when she can combine these different components. Gwenna Hunter, founder of Vegans of LA, a group celebrating urban vegan pop culture. She is also a coordinator of community engagement and events for Greater Los Angeles at Vegan Outreach. Photo by Nikki Ritcher / #unboundproject / We Animals Media.

These days, Hunter finds inspiration everywhere, not least from the fact that African Americans are the fastest growing vegan demographic in the United States (in 2016, the Pew Research Center found that 8% of African-American adults identified as vegan, compared with 3% of American adults overall). In addition to being deeply involved in the social justice uprisings of the past year, she says the pandemic has given her a deeper awareness of the need to maintain her own mental health, and has become more proactive about her own well-being. “I know people who are stimulated by drama, but I need to be in a place of joy,” she says of her work, which can be emotionally and physically grueling.

“Even though I know the darkness of this horror movie — what we’re really trying to do here is get people to stop eating dead bodies — when I can find a way to do this joyfully, I can go for a long time and put out good work.”

She’s humble, resourceful and knows how to play to her strengths. “I’m no scholar and I’m terrible at memorizing statistics, but I feel like I’m an expert at being a person,” she says with a laugh. “I’m pretty good when it comes to love and compassion. So I can’t go wrong when I talk about those things.”

Photos by Nikki Ritcher. Interview and story by Evan Shamoon.