Open Your Eyes and See the History All Around You: The Importance of Knowing Our Activist History 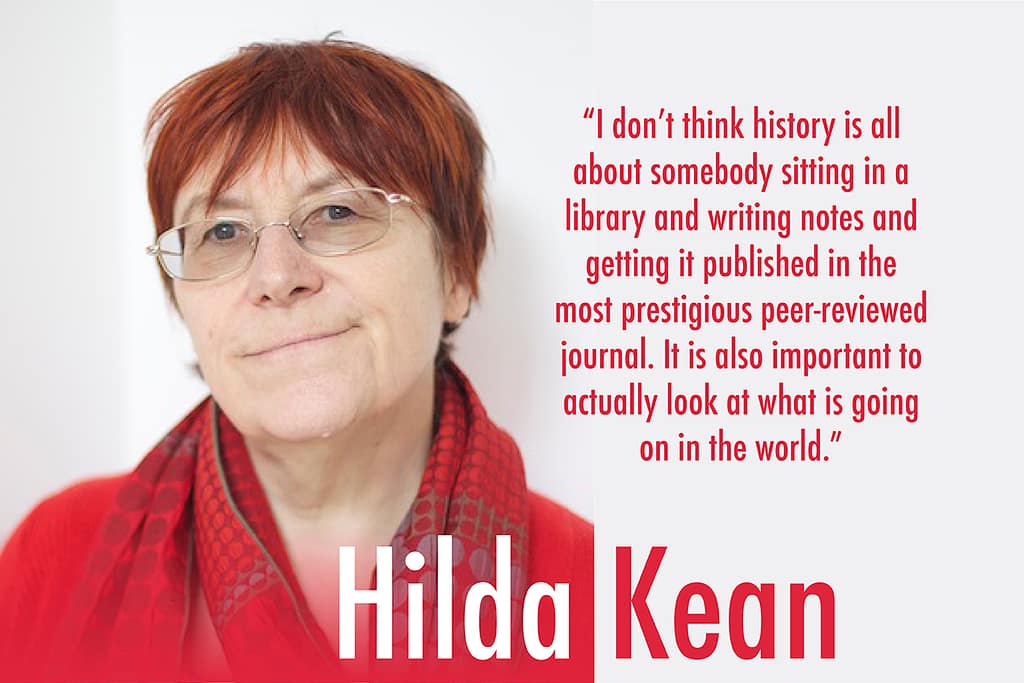 It is no exaggeration to say that Hilda Kean set me on the path I am on today. Well, to be more specific, one of her books did–it would be several years until I would actually meet Hilda Kean in person! When I was a graduate student in the early 2000s my research was situated in environmental studies but, at that time, the idea of studying and thinking critically about animals was still quite separate from the scholarship being done in environmental studies. I found this somewhat strange and a little frustrating, but then I came across Hilda Kean’s Animal Rights: Political and Social Change in Britain Since 1800. This was the first time that I had read the work of a writer who had taken human-animal relationships seriously as a subject of cultural and historical research. Her influence has been enormous, not just on my own work, but on the fields of animal studies and human-animal history.

For this interview, I arranged to meet Hilda Kean a few summers ago at a vegan cafe in Brighton, UK. When she arrived, she told me that she had almost missed her train because she had awoken to discover a fox in her house that morning! “I don’t see why some people are frightened of foxes,” she calmly said as she recounted the details of what had transpired that morning.

The fox Kean found in her house that morning.

Hearing Kean talk about her encounter with this fox reminded me so much of her writing. In both cases her narrative is framed by a compassionate yet critical inquiry. Her work is grounded by a real concern for thinking about the actual lived experiences of individual animals and she resists historical understandings of human-animal relationships that are informed by clichés or symbolism.

For instance, in one of her recent books, The Great Cat and Dog Massacre: The Real Story of World War Two’s Unknown Tragedy, Kean went to great lengths to learn as many individual stories as she could after the 400,000 cats and dogs in Britain that were killed by their owners at the outbreak of the Second World War. In telling these stories she moves beyond the standard tropes typical in narratives about both this war and of human-animal (and animal-human) bonds. Her meticulous research is grounded in actual events and testimonies and, as such, complicates the narratives we like to tell ourselves about our historical relationships with our companion animals. This is an uncomfortable history and Kean does not shy away from telling it.

Likewise, Animal Rights is a book that looks at the complicated history of animal advocacy in Britain. Kean’s motivation for writing Animal Rights grew out of a sense of frustration about the lack of awareness of activism in previous historical periods.

“It is important to acknowledge that in Britain campaigns for animal rights and animal welfare go back at least to the late 18th and early 19th century,” she stresses. “So, if you like you can say you don’t agree with these ideas, but you can not say that these ideas came from nowhere.”

“These things did happen and they were important.”

Kean underscores how important it is for activists of today to know that “these ideas have not just come out of thin air.” Anti-vivisection, in particular, has a long and complex history in places like Britain, and it was women who were often on the front lines of these fights. Recognizing the work of these reformers from earlier historical periods is important, Kean feels, not only to give credit where credit is due, but also to allow us to take a broader historical perspective on animal advocacy. This can help reframe some of our current struggles to change the world for animals. Kean acknowledges that as we look to this history and realize that some of the fights we are fighting today were also being fought by previous generations of activists it can be “somewhat depressing” at first glance. But Kean stresses that knowing this history also “places things in a broader context of time” to allow us to see how the “ideas and campaigns have been worked through, modified, and emphasized in different ways. They have had some successes over a period of time.”

Activist Helen Nelson at a demonstration against the use of animals in laboratories. England, 2011.

As a historian, Kean feels it is important to take the full messy, complex narratives of animal advocacy into account. Looking to the past only as a source of “inspirational stories…implies that there were only successes.” There have been, of course, changes for the better. Kean points to the status of companion animals as an example of this, noting “that their lives are better now than they were say in the early 1800s or even in the early 1900s.” With farmed animals, however, she is concerned that things may be “much worse than they were 100 years ago, that moving animals away from fields to inside” has caused even greater concerns for activists.

While Kean is pleased to see so many people working on animal studies topics within academia in recent years, she also sometimes finds it frustrating that this academic work can often be incredibly “esoteric” and seemingly removed from actual animals. For Kean, animal studies is much more than an “academic exercise” and she finds it “quite shocking” that there are some working in this field who “apparently have no interest in living animals.”

Kean also stresses the importance of historians getting up from their desks.

“I don’t think history is all about somebody sitting in a library and writing notes and getting it published in the most prestigious peer-reviewed journal. It is also important to actually look at what is going on in the world.”

Kean embodies this perspective in her own work. For example, during the time she was writing Animal Rights she remembers reading comments in a newspaper that ridiculed animal rights activists who had been protesting the selling of live lobsters. She recalls that the comments were along the lines of “Where do these mad people come from? Fancy doing this about lobsters!” As she was reading about this protest and the public response to it, she couldn’t help but think about the 1829 pamphlet she had found during the course of her research. This pamphlet was “published by what was then the SPCA. It was a campaign about lobsters and the cruel way that lobsters were boiled alive.” As she read the newspaper coverage of the protest in the late 1990s the connections between the 19th century protest and the 20th century protest were obvious to her. “When I’m reading something like that in the newspaper, I’m relating that in my head to other things I’m doing. And it makes me think ‘I have to do something.’ I don’t mean that I have to write to the newspaper necessarily, I mean, I will do that, but it is more around thinking about how to argue the importance of knowing the history of animal rights activism.”

While Kean is passionate about the history of the animal advocacy movement, she is also firmly rooted in the present moment, and keeps a sharp eye out for ways in which human-animal histories remain part of our current environments. “I just see things in the environment that catch my interest.

“I sometimes notice things others don’t because I think most people run around with their eyes shut.”

Walking, looking, and noticing details such as statues or monuments featuring cats, dogs, horses, or other animals are an important part of Kean’s research methods, and her impressive list of published writing on human-animal histories is a testament to how astute she is at this practice. She also spends a lot of time talking to people, asking questions, and thinks critically about how animals and humans would have interacted in previous spaces.

Understanding this kind of context is at the heart of the work that Kean does. For instance, she discusses the Old Brown Dog memorial, a highly controversial monument dedicated to a dog who was killed in a vivisection laboratory in 1903. During the early 20th century this memorial statue became a touchstone for ongoing debates about animal experimentation until the decision was made to remove it from the Latchmere gardens completely. In 1985 a replacement statue was placed in nearby Battersea Park, but, as Kean points out, the new statue was within the park and this was significant. The placement of the original statue was highly political. As Kean notes, it was “in the middle of a model housing estate for workers. This was a socialist area at the time. So, the location of the statue very much brought across the politics of it, the alignment of ordinary people and animals.” This historical connection is not immediately apparent with the new memorial statue having been placed there just before the demise of the socialist Greater London Council (GLC). This is the kind of attention to detail that informs all of Kean’s work.

“We need to consider these things in their social and cultural contexts.”

When I asked Kean about the kind of advice she would give other writers and scholars who want to make a difference for animals, she replied that “it is really just thinking about what you want to do, and if you want to do things that privilege the position of animals, you just do it.” I couldn’t agree more.

Thank you, Hilda, for all you have done for animals and for the field of animal history.