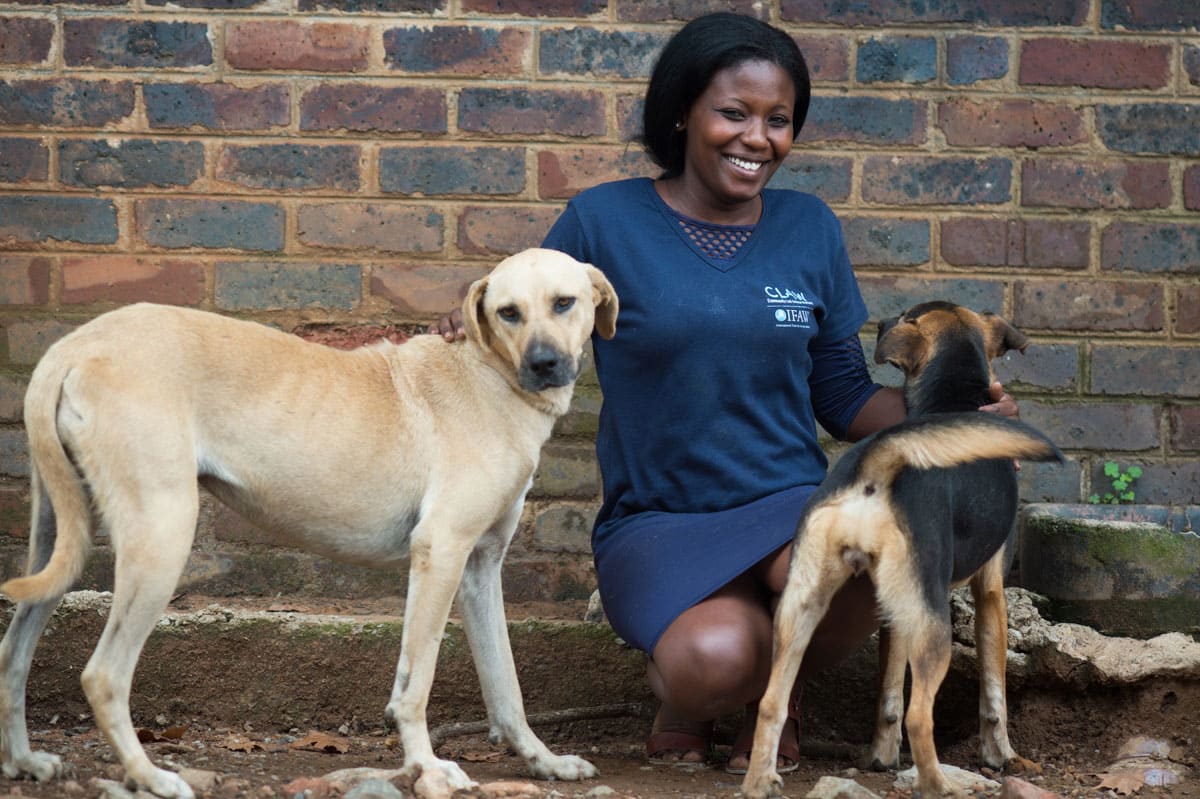 Lumka Golintete is often smiling even though she has witnessed so much suffering. Her energetic and compassionate nature has equipped her to deal with so many heartbreaking stories in her work as an emergency first responder with Community Led Animal Welfare (CLAW), an organization based in Johannesburg, South Africa. CLAW provides veterinary, rescue, and rehoming services within the various townships, and also runs a program of education with the intent to create a “culture of accountability” when it comes to the way animals are treated.

While CLAW’s primary focus is on dogs and cats, Golintete grew up learning to respect and care for many different kinds of animals. Her father taught her from a very young age that animals should be treated with respect. “We are supposed to treat dogs and cats like the way we treat each other as humans,” Golintete says when recalling some of the lessons her father taught her. He helped her to understand that it was important to speak kindly to animals and he modelled this behavior in the way he interacted with the many rescued animals who shared their home over the years.

Through her work with CLAW Golintete encounters terribly heartbreaking situations as well as situations where kindness and compassion shine through. “Sometimes I have those days where I cry too much because of the things I see,” she admits. But it is frequently a case of mixed emotions because in a matter of a few hours she can move from seeing “good things, people treating their dog so well,” to “terrible things, someone being bad to a dog.”

So much of Golintete’s work is about taking care of the immediate needs of both animals and humans. She is often called to homes where the occupants are living in extreme poverty and she sees first-hand how this impacts the lives of everyone in the home, including the nonhuman animals. For example, she frequently encounters situations where both a human caregiver and their dog are “in a terrible state” because there is not enough food to go around. Golintete feels strongly about helping people so that they are in a better position to take care of the animals they share their homes with. “When you see things like that you can’t just take the dog away from them,” she stresses, “that isn’t fair.” Rather, in these situations she recognizes the need for compassion and takes practical steps like distributing food parcels.

Golintete cites a lack of education as the root cause for so much of the cruelty she encounters through her work with CLAW. “It isn’t that people are necessarily cruel,” she points out, but, rather, that “some feel that dogs do not need medications or vaccinations.” In South Africa it is common to have dogs for security reasons, and Golintete has also encountered many people who “believe that if a dog is too full he will be lazy and too sleepy to bark at intruders.” She has seen many instances where dogs are deliberately kept underfed in the hopes that these animals would then, in turn, act as better guard dogs. But, as Golintete points out, this is a counterproductive attitude—“most people want dogs to be security, but you can’t expect dogs to do this if they are hungry.” Likewise, she encourages people who have dogs for security reasons to bring them in the house and to not leave them tied up outside where they could easily be poisoned. “How is a dog supposed to protect you from outside?” she asks, “You are in the house, so isn’t it better to have the dog in there with you? They can bark and scare people off and nobody gets inside.”

When Golintete encounters cases of animal abuse she tries to remember the educational potential of the situation. She always aims to stay calm and to “make friends” with people so that she has the opportunity to teach them about treating animals with compassion. “Losing your temper isn’t effective because you haven’t passed any information to them besides anger,” she notes. “You have to try by all means to stay calm, stick to what you are saying, and make sure that they have learned what you are saying to them.”

Golintete understands that there are often cultural and social barriers to overcome when asking people to rethink how they treat animals.

To this end, Golintete feels that there is tremendous potential in educational programs for children. When asked about future plans, she talks enthusiastically about her hope that CLAW can one day offer a “safe after school space for kids, a space away from some of the problems they encounter in their daily lives.” In Golintete’s vision of this program, children would not only be encouraged to work on their studies through various prizes and academic competitions, but they would also get to spend time with the rescued animals that CLAW works with and, as a result, have the opportunity to see animals in a new light.

Golintete’s work with CLAW is such an important part of her life. She is often on call to help deal with emergency situations, but even when she is not scheduled to work people often show up at her house to seek her assistance. She works long hours and has little time for socializing or hobbies, but she doesn’t seem to mind. “I think I’m happy with everything and don’t feel like I’m sacrificing much,” she laughs, “I’d rather be here.”

It is Golintete’s drive to help animals and to help people understand why kindness to animals matters that keeps her going through long days and tough situations. She wants people to understand that “animals are precious” and that “animals just need someone who can understand them.” She believes that there are many ways in which humans and animals are similar and that “animals do try to show how they feel, they do show every emotion.” One of the main problems she sees is that many people do not know how to pay attention to what animals are trying to communicate. “We just need to look deep in to them, to understand their feelings and to listen to them.” It is Golintete’s goal to encourage as many people as possible to do just that.