Political Gains: Marianne Thieme and the Dutch Party for the Animals 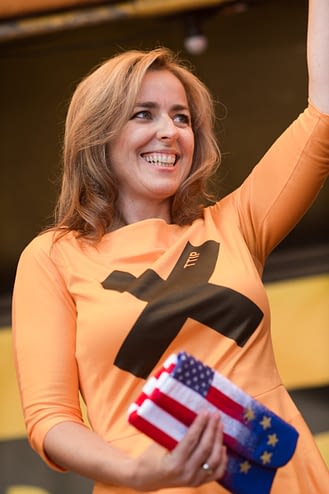 Marianne Thieme at a rally against the Transatlantic Trade and Investment Partnership in the Autumn of 2015.

“…the fork and knife are our mightiest weapons in protecting the world for future generations.” -Marianne Thieme

Marianne Thieme is a politician working hard to make the world a better place for animals. She is one of the founding members of the Dutch Party for the Animals (Partij voor de Dieren), and currently serves as the the Parliamentary Leader for the Party. For activists understandably frustrated by governments and politicians who seem to be guided more by profits than compassion, Thieme is a breath of fresh air.

Thieme is driven to make the world a better place, both for humans and for animals, and her energy and passion are infectious. She has a commanding and captivating presence, and has gained the support and respect of many who wish to see her visions become a reality.

Thieme recognizes that her politics and policies set her apart from most of her colleagues — as she describes, for many Dutch politicians “animal welfare is high-priced nonsense.” This dynamic was especially apparent after the 2002 election which saw Jan Peter Balkenende come to power. As Thieme remembers, “farmers’ representatives of his coalition parties were keen to reverse all animal welfare measures from the last 20 years as swiftly as possible. Animals became objects once again, which were only intended to serve the appetite and the economic purposes of people.” In response to this, the Party for the Animals was founded, a political party that has since gained seats in both the European Parliament and the Dutch House of Representatives.

Getting support for a political party that has the treatment of animals as its main focus has not been an easy sell. “You can imagine how people mocked us,” Thieme exclaims, “they made fun of us, they couldn’t believe their ears when they hard of our existence.” But from the very beginning there was a core group of people who supported this endeavour — “feminists, famous authors, intellectuals, opinion leaders, who saw us as the next emancipation movement. After the liberation of slaves, women, giving rights to children, the next logical step was to consider the interests of animals seriously, to look beyond the interests of our own species.” In her recent book, The Canary in the Coal Mine, Thieme notes that while some have equated the Party for the Animals as “a betrayal of our own kind,” for many others it meshes nicely “with a planet-wide vision that they find lacking among the majority of our current leadership.”

Marianne Thieme joined by several other women who support the Party for the Animals at a rally against the Transatlantic Trade and Investment Partnership in the Autumn of 2015.

Marianne Thieme being interviewed by Dutch media about the rally against the Transatlantic Trade and Investment Partnership in the Autumn of 2015.

The rarity of a political party so centrally focused on the treatment of animals has garnered The Party for the Animals considerable media attention, something that Thieme does not take for granted. “Many environmental and animal welfare organisations and lobbyists have to work hard to get their 5 minutes in the spotlight of politics,” she says, “it is really special that we have managed to get in the door.”

Thieme and the others involved in the Party for the Animals are a hard-working, dedicated group (“we have been working our butts off in parliament!”) who constantly seek out new ways to make the world a better place for animals. As Thieme describes, “our tools vary, from participating in debates with Secretaries of Government Departments, to asking parliamentary questions, to proposing measures through petitions the parliament votes on.” Some of the initiatives that Theime is working on include: “a ban on enriched cage systems for laying hens, more budget for alternatives for animal experiments, a demand for transparency of the animal testing experiments, a 6 million euro budget per year for meat alternative innovations, stronger law enforcement on trade in wild and endangered animals and research on the animal welfare problems of circus animals and animals in zoos.”

When asked about some of the biggest political victories that she has seen so far in her career, Thieme points to a ban on wild animals in circuses that came in to effect on the 15th of September, 2015. Similarly a recent ban on the import of hunting trophies in the Netherlands is also an initiative that Thieme and her colleagues in the Party for the Animals are very proud of. One of the main goals that Thieme has is to continue to push for the end of factory farming. She wants to see initiatives like a “meat tax”  as a way to use economics to encourage people to switch to a plant-based diet.

Thieme has long worked to make the world a better place for animals, and her role with the Party for the Animals has certainly given her an important platform from which to speak out against the many injustices that animals continue to face in the 21st century. We certainly hope that her example continues to serve as an inspiration to both voters and other politicians.