The “Jane Goodall of Snakes” 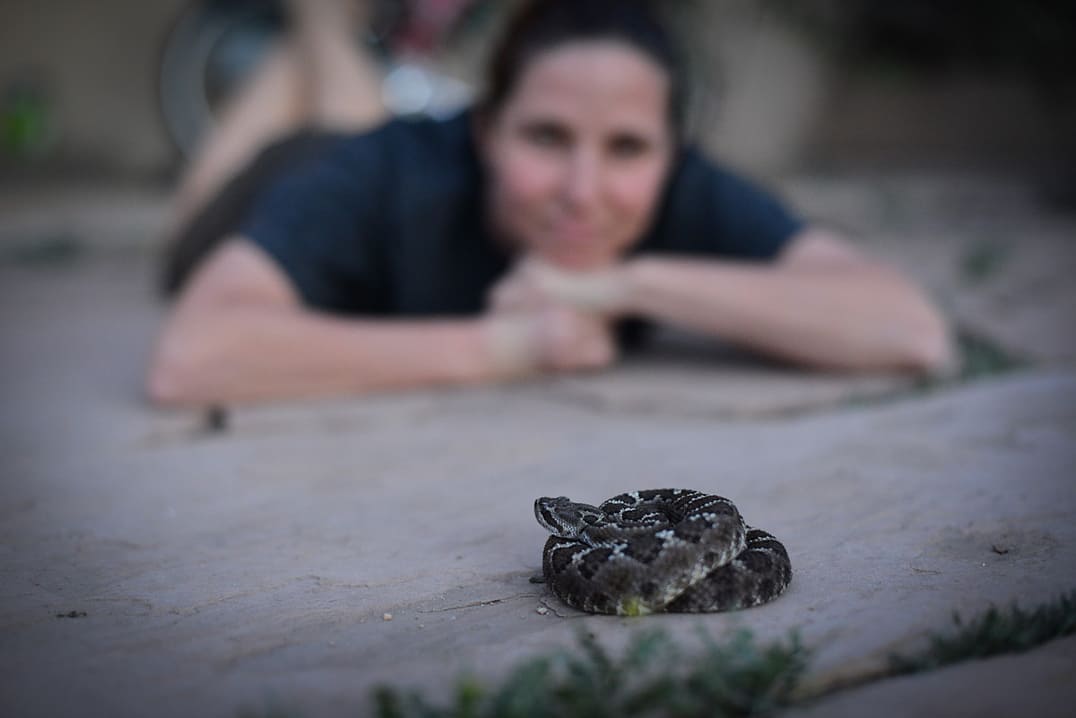 Snakes are among the most maligned of all animals. For centuries they have been vilified and have stood as symbols of evil and vice in many cultures. They have repeatedly been relegated to the role of villain in countless fairy tales, fables, and works of art, and this has translated in to fear of and violence towards these animals. Even among those who declare themselves to be “animal lovers,” snakes tend to be overlooked and forgotten in the push to protect and defend other species. Melissa Amarello wants to change this. She is the co-founder and Director of Education of a group called Advocates for Snake Preservation (ASP), and in this role she works hard to challenge negative ideas about these animals in the hopes that people will start to think differently about snakes.

Amarello knows that this is an uphill battle, but she has learned that there are some effective ways to counter misconceptions about these animals. Due to the physical appearance of snakes, many people feel they cannot relate to them and, therefore, do not recognize the complex social lives and unique personalities that these animals have. In response to this ASP has developed a strategy in which photos and videos highlighting things like friendships among snakes are shared through social media channels. Amarello emphasizes the way that these tools can help to change attitudes towards snakes:

We focus on individual snakes, give them names, and tell their stories using photos and videos to illustrate snake behaviors that people find appealing and know little about (social behavior, parental care). Names and stories are powerful weapons in fostering compassion and understanding — it’s amazing how people’s perception immediately changes when an animal has a name.

Stories about how snakes form social bonds and how they sometimes do things like “babysit” the offspring of another snake are reinforced through videos taken by a camera that is operated remotely so as to not disturb the animals. Amarello points out that “snakes get a ton of bad press, so countering that with positive information is very helpful.” She encourages supporters of ASP’s work to share the stories and videos they post and to help tell positive stories about these animals—“people often trust information from their friends more than an expert. Never doubt the power of individual voices speaking up and out!” These stories also help to further the scientific information that exists about snakes, as few researchers have paid attention to these aspects of snake behavior.

Amarello first began working with snakes as an undergraduate student; as a graduate student she did behavioral studies on rattlesnakes as part of her academic research. During her graduate studies she had been working closely with nine snakes, and academic procedure and protocol dictated that she was supposed to euthanize them at the end of the study. Amarello realized that these animals did not deserve to die simply because she had completed her degree and instead ended up relocating them to venues where they would be used for education, including four she keeps in her home. She had been planning to continue her studies at the doctoral level, but had an epiphany, realizing that “snakes needed an advocate, not another scientist.” It was at that time when she founded her first advocacy organization, a group called Social Snakes.

Social Snakes has now transformed in to ASP, an organization she runs with her partner, Jeff. In addition to videos and stories shared on social media, ASP also publishes what they have discovered about the behavior of snakes in a wide range of venues, including peer-reviewed scientific journals. This work is helping to change the conversation about the social, emotional, and intellectual lives of snakes.

Amarello has always been interested in animals and recalls that right from when she was young she “wanted to be the Jane Goodall of snakes.” She points to how Goodall’s ideas and research methods were initially dismissed as being unscientific because they didn’t follow standard research methods, and how she wasn’t taken seriously at first in the male-dominated field of science because of her gender. However, as Amarello points out, Goodall “refused to change her methods to meet ‘scientific norms,’ and, as a result, discovered some pretty amazing things about chimpanzee behavior.” This has greatly inspired Amarello in the way she approaches her own research and advocacy work.

Amarello has great respect for those who do investigative work to help stop animal cruelty (including the Unbound Project’s own Jo-Anne McArthur with whom she has worked closely). She draws strength and inspiration from those who do this work—“to see what they see and keep going instead of drowning in despair” makes them heroes in Amarello’s eyes. She is also greatly inspired by many in her own local community (Tucson, AZ) who are working to make a difference for animals, and specifically pointed to the work of Jessica Shuman of Tucson CARES and Alecs Havardr of Tucson Feral Trap Neuter Return who have both “devoted to their lives to animals and do amazing work.”

Amarello and the ASP face many challenges in their mission to change the way that people think about snakes. In early March they will be launching their first major campaign, a campaign which aims to reform “rattlesnake roundups.” This is an expensive undertaking, the first of its kind for this volunteer-run, non-profit organization. For more information on how you can help support this work, please visit the campaign website.