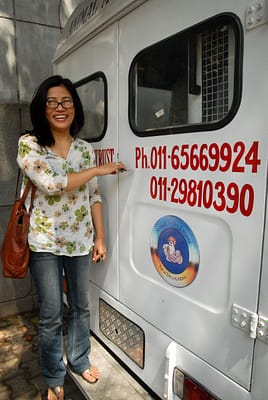 “The more one does and sees and feels, the more one is able to do.” –Amelia Earhart

In March of 2002 Dr. Sarungbam Yaiphabi Devi decided to follow her dreams. As a veterinarian she had always been driven to help animals, but she had made up her mind to quit her job in order to begin a new venture, one that would allow her to specifically focus on helping the large populations of free foaming dogs in India. “I had this vision of a controlled canine population, healthy and well fed stray dogs in the nooks and corners of Delhi, and I set out to make this vision a reality by founding Animal India Trust (AIT), an organization that works to improve the lives of street dogs in New Delhi.”

Leaving the security of her job to start AIT was a big gamble both personally and professionally for Dr. Devi—this was a venture that would take a tremendous amount of work and the odds were certainly against her, but she was focused and driven and had many good ideas about how to best address the situation. “I put all of my savings in to the project and was greatly relieved that after a year of hard and toiling work, I received some government grants to help with this initiative.”

Dr. Devi certainly had her work cut out for her, as there is a very large free roaming dog population in this area—she estimates that there are approximately 300,000 free roaming dogs on the streets of Delhi. She sees the urgency of this work, noting that “without a comprehensive spay/neuter program in place to slow and eventually stop the indiscriminate breeding of Delhi’s free roaming dogs, their numbers will continue to increase.” In addition, she worries that “increases in population places increased pressure upon the dogs in their day-to-day struggle to survive, as well as increased incidences of various communicable diseases among the human and dog population.” There is also a concern that there the growing population of free roaming dogs has also lead to a spike in rabies cases. As Dr. Devi explains, “New Delhi’s free roaming dog population and rabies are inseparable issues and, here in India, one goes with the other. Therefore, it is absolutely necessary to ensure both parts of the equation are taken into consideration while doing our type of work.”

Dr. Devi manages to stay positive and hopeful even when faced with such a large population of animals in need. She approaches her work systematically, and believes that “the most effective demonstration Animal India Trust can make to the value of sterilization and vaccination is to concentrate their efforts on a particular area or zone, and massively sterilize and vaccinate within that area to achieve an over 70% success rate. If this rate of sterilization is accomplished within one breeding cycle, the results are immediate, demonstrating a visual and measurable impact.”

AIT started small and first began operating out of a small basement office. Today AIT has two offices in Delhi and is looking to start a third location early in 2017, a testament to just how successful this venture has been. Dr. Devi remains the managing trustee and veterinary surgeon, but now has a staff and many volunteers to help her with this work.

AIT’s work is making a noticeable difference, and has changed the lives of hundreds of animals. “When I look at the strays of Delhi now”, says Dr. Devi, “I feel proud that they look well, healthy and that there are no skinny hungry looking pups hanging onto the totally emaciated looking mothers.” AIT collaborates with local Resident Welfare Associations (RWAs) and dedicated community leaders to spear-head veterinary initiatives in a number of different neighbourhoods. Dr. Devi is quick to praise these joint initiatives, noting that “if all the RWAs in Delhi do the same, we will not have rabies and, at the same time, canine population will be checked and stabilized.”

There are many challenges that Dr. Devi and the AIT team face on a daily basis. In addition to the staggering number of animals in need, they also face complaints from members of the public who do not seem to appreciate the levels of complexity this work entails. Even on the toughest days, Dr. Devi remains committed to helping animals in need and draws strength and motivation by reflecting on the changes that AIT has been able to make so far. “There are many areas we have worked in where we now see fewer dogs, no puppies, no evidence of rabies. This makes us feel that if we really work hard and get more dogs spayed/neutered, one day we will be able to achieve our goals.” When Dr. Devi started AIT she thought that she might be able to get the health and population issues related to the large number of free roaming dogs in Delhi under control in 10 years. She now realizes that “we still have to carry on this work and intensify the program and reach out to neighbouring areas. This is the only way to control the populations humanely and to also reduce incidences of rabies.”