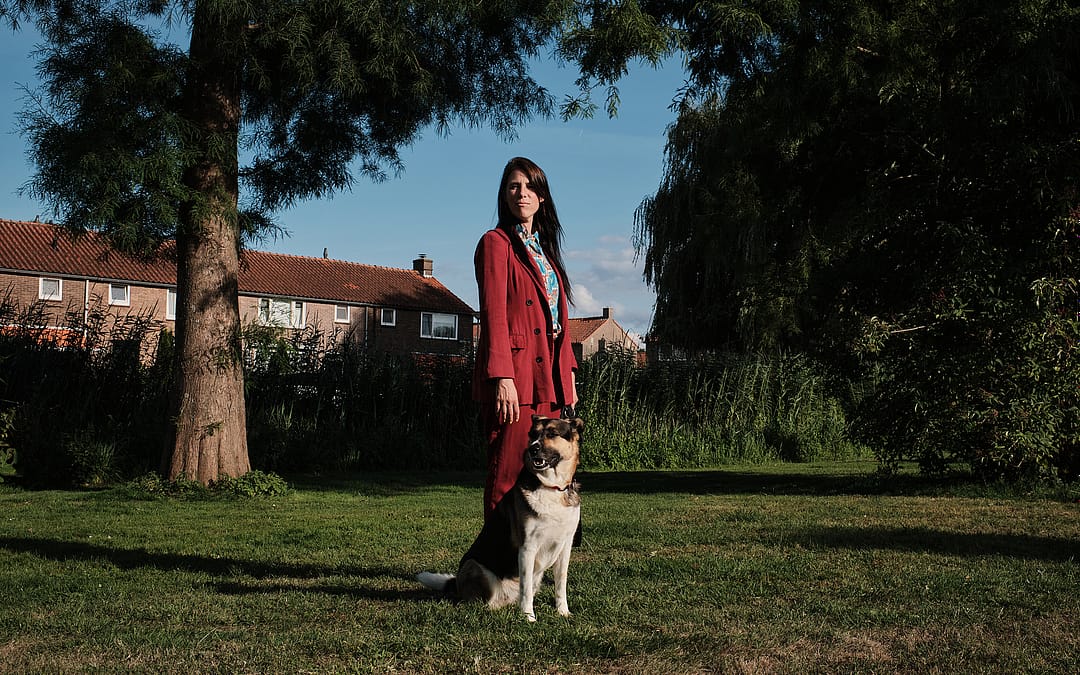 “There is a huge amount of information about the ways in which animals express themselves, speak to each other, mourn losses, fall in love, do all of these things that we tend to think of as solely human…”

A philosopher, prolific writer, artist, and singer-songwriter, Eva Meijer seems to have her fingers in every pie imaginable. When I catch her, she has just returned home to the Netherlands from Poland where, she tells me with surprisingly little fanfare, she may have become the first person on Polish television to advocate for better care for animals.

She is both forthright and self-effacing, describing her role simply as “to say what needs to be said” to promote a different way of thinking about and relating to non-human animals. “I’m not afraid to use words like ‘language’ or ‘culture’ [in relation to animals],” she explains.

Growing up with animals, Meijer felt a special connection with them early on, becoming vegetarian when she was eleven. She began writing songs and poems at fourteen and studied singing and art at the Royal Conservatoire and Royal Academy of the Arts, before pursuing philosophy.

Whether academic or artistic, for Meijer each form is simply a new language through which she can give meaning to different experiences. “I’m lucky that I have many ways of ‘singing the world,’” she muses, reciting French philosopher Maurice Merleau-Ponty.

“Philosophy is a lot about being critical of existing hierarchies and violence, but also about showing the world differently,” she explains, “so in that sense I think it’s not so different from art because you can make people look at things that they take for granted and reconsider it.”

Her PhD thesis and resulting books Dierentalen (Animal Languages) and When Animals Speak explore the use of language in animal groups and between human and non-human animals, making the case that animal language is, in fact, political.

“Bird Cottage”, one of 14 books written by Eva Meijer. She researches, writes, paints, photographs and makes music around the themes of animal and human language, politics and communication. She has written 14 books which have been translated into over 20 languages. North Holland, Netherlands. 2022. Sabina Diethelm / #unboundproject / We Animals Media

“There is a huge amount of information about the ways in which animals express themselves, speak to each other, mourn losses, fall in love, do all of these things that we tend to think of as solely human,” Meijer explains.

“It changes everything, because our societies are built around the idea that humans are the only rational animals, the only creators of meaning, the only cultural animals, social animals . . . [and] the other animals have been excluded from so much of that.”

Her post-doctoral research at the University of Amsterdam takes these ideas a step further. Since many animals have clear ideas about how they want to live, Meijer argues that their capacity to make decisions about that life and to maintain it should be respected and protected.

“If you have a perspective on life and it matters to you, then it should matter democratically too,” she argues.

Humans, for our part, need to engage in conversation with other animals as active participants in their own existence. This means listening to what they have to tell us about their own experience, about the kind of future they want, and what relationship—if any—they want to have with us. The recognition of animal agency, believes Meijer, “is one of the most important tasks of humanity and justice.”

Whilst this might sound idealistic or outright strange to some, Meijer emphasizes that there are already places where this co-creation is happening, particularly outside of Western social constructs.

“There are indigenous communities that have different relations with non-human animals and see themselves positioned differently with regard to them, and already accept a lot more of their agency,” she explains.

She gives the example of a community in Indonesia that hunts together with crocodiles, representing a kind of understanding around co-existence and resource sharing. In an urban environment, this might look like decolonizing landscapes, reducing the number of roads and infrastructural developments, and relinquishing land back to other species.

In developing different stories about humans and animals and how we can live together, says Meijer, “the presence of actual animals is something that matters a lot.” She currently shares her home with two dogs, Romanian strays Olli and Doris, mischievous ex-laboratory mice, and three rescued guinea pigs.

Olli in particular, she tells me, is “great to think with about these questions, because he’s been living on the streets for five years . . . It was never a question of me dominating him, he’s his own person. Even if I would want to possess him in some sense, it’s simply impossible.”

Meijer gives frequent public talks, where she meets many people who are hungry for a different relationship with animals.

“People feel that there’s something wrong with the way we treat animals, but at the same time they’re very accustomed to it, and when you speak to them about it, then it helps them to articulate that it’s not normal,” explains Meijer. “This is why I like speaking about language, because it always has this element of wonder in it.”

Despite the violence our societies enact on animals, she also holds a lot of hope in the power of activism.

“We can participate in a struggle for change, and this will make a difference,” she insists. “Even living differently is a form of activism, so my whole existence feels very activist.”

When she moved a few years ago to a rural part of the Netherlands, Meijer noticed that many frogs and toads undertaking a centuries-old migration to food sources were being hit by cars while attempting to cross busy roads. In response, she began a “frog and toad group” through which locals assist the frogs and toads to travel safely from gardens to larger ponds.

This kind of localized activism can be powerful. In the two years the group has existed the narrative in the town about frogs and toads has shifted from one of apathy to one of care.

“These are all small-scale experiments to become more attentive, more aware of the fact that we share this planet with other animals,” says Meijer.

“I honestly feel that we are not here for ourselves but that the whole meaning of life is to be a good person for others and to make a change in the world for them, and when you can do that, that’s a gift, and also humbling.”

Meijer’s most recent novel, Zee Nu, was published in March 2022 by Uitgeverij Cossee.