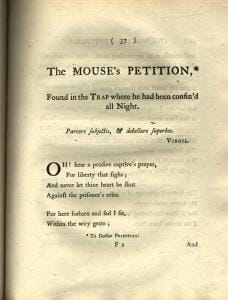 I n 1773 Anna Laetitia Barbauld published a poem called “The Mouse’s Petition.” The poem was written from the point of view of a mouse who had been captured in the home of Barbauld’s friend, the renowned natural philosopher Joseph Priestley. The mouse was placed in a cage in Priestley’s laboratory as he intended to use the animal in one of his experiments the next day. Barbauld’s poem was a plea for mercy, and she slipped in to Priestley’s lab to affix it to the cage so that he would see it prior to beginning his experiment on the mouse.
The poem begins with the following lines:

O hear a pensive prisoner’s prayer, For liberty that sighs; And never let thine heart be shut Against the wretch’s cries!
For here forlorn and sad I sit, Within the wiry grate; And tremble at the’ approaching morn, Which brings impending fate.

Priestley reportedly released the mouse after reading Barbauld’s poem. Many of Barbauld’s contemporaries championed “The Mouse’s Petition” as an important contribution to the conversations about cruelty to animals that were taking place in the 18th century. Samuel Taylor Coleridge, for example, noted that “thanks to Mrs. Barbauld,… it has become universally fashionable to teach lessons of compassion towards animals.”* Barbauld later stated that this poem was actually meant to be a “petition of mercy against justice.”* In either case “The Mouse’s Petition” is an important early example of a creative work that prompted readers to empathize with nonhuman animals and to consider the often unjust ways they are treated.