“Not a Drop to Wet Their Poor Parched Mouths” 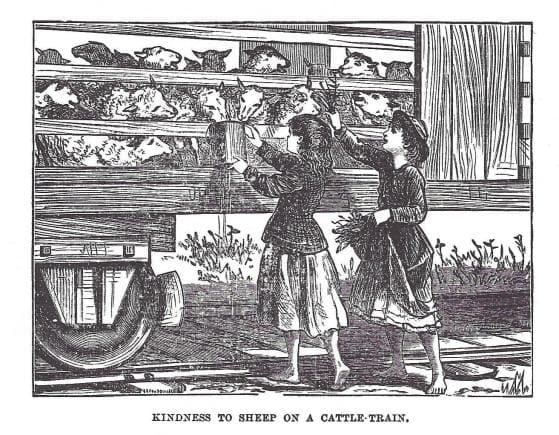 A round 1870 Louisa May Alcott, author of Little Women, witnessed an act of compassion that deeply touched her. She had been on a train journey, and near Fitchburg her train pulled up alongside another train at a station stop. As she waited for her train to continue, Alcott passed the time by looking out her window at the sights — a beautiful waterfall caught her attention, but she also noticed that in the train next to hers were several cattle and sheep crammed in to rail cars.
It was a hot, sunny day and Alcott recognized that the animals must have been scared, uncomfortable, and thirsty. As she noted, “how they must have suffered in sight of water, with the cool dash of the fall tantalizing them, and not a drop to wet their poor parched mouths.” She was troubled by the very visible distress of the animals in the next train and was pondering how she might best help them when she noticed two young girls come up beside the train. The girls had been out picking berries and, upon noticing the animals in distress, one of the girls dumped out her berry pail, ran to the water’s edge and filled her bucket with water. She returned to the train and offered the water to the sheep “who stretched their hot tongues gratefully to meet it.” She repeated this numerous times while her companion picked grass and clover to feed to the animals. Alcott was touched by this kindness and wrote that she wished she “could have told those tender-hearted children how beautiful their compassion made that hot, noisy place.”

This story was repeated in a number of 19th century animal advocacy and humane education publications, often with the above image accompanying it. The actions of these two young girls became a lesson in kindness and compassion.

Over 140 years later a similar story is being told. Members of Toronto Pig Save, a grassroots organization that aims to bear witness to the suffering of animals who are raised and killed for food, have made headlines for giving water to pigs arriving at slaughterhouses on transport trucks. Their actions mimic those of the young girls that Alcott wrote about in 1870. This past summer, a heated exchange between one of the activists, Anita Krajnc, and the driver of one of the trucks has led to a criminal charge of mischief for Krajnc.

It is utterly absurd that we live in a world where kindness and compassion is criminalized. What, I wonder, would Louisa May Alcott have to say about this ridiculous charge?