“Animal welfare science has provided us with enough evidence to justify behavioural change.” 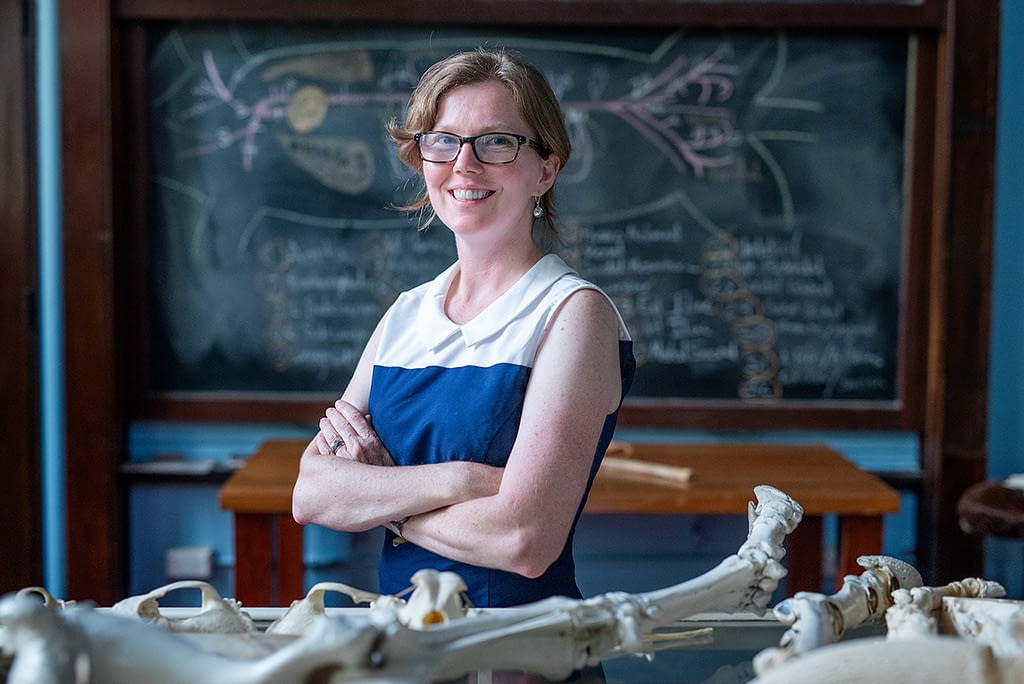 Anne Quain is a veterinarian, a lecturer in veterinary ethics and professional practice, the author of a book on veterinary ethics, and a columnist on issues relating to companion and other animals. To put it simply: her life revolves around animals.

Despite her obvious passion for animals and their care, Quain didn’t initially think of becoming a vet; she first studied philosophy and ethics. But when it came time to graduate, she found that there weren’t many paid jobs available for an ethicist. Rethinking her future, she asked herself that question repeated by careers counsellors everywhere: “What do I really love?” Her answer was spending time with animals, and she decided to maximise that. She went on to study veterinary science and began working in small animal practice.

I was one of those kids who would always proclaim ‘I love animals!’ yet my behaviour wasn’t aligned with this.

For Quain, working with animals inspired a shift in how she sees them. “I was one of those kids who would always proclaim ‘I love animals!’ yet my behaviour wasn’t aligned with this. For example, I would sweep up and vigorously embrace our family cat, even though she clearly hated this and always struggled out of my arms,” she remembers. “I loved going to the zoo, but for many years failed to reflect on the fact that while the captive state of the animal allowed me to have an up-close, photogenic experience, that animal continued to live in that enclosure 24/7, 365 days per year, sometimes for decades.”

While many of us consider ourselves to be animal lovers, she believes the challenge is to align our behaviours with those values, and to give thought to how even our most well-intentioned actions impact on others. For Quain, truly caring for animals requires observing and understanding their behaviours and acting with consideration for their wants and needs.This is a lesson that speaks to the core of her work, one that informs her teaching and advocacy, and one that is fundamental to her worldview. “I expected animals to fit into my world without realising just how little choice or control they have.” The focus, she believes, should not be what we think and feel, but what we do for animals.

Quain uses her position as a companion animal vet to advocate for more conscientious care for animals. In consultations, her human clients often reveal the same disconnect that she experienced between positive intentions and negative outcomes for animals. Cats and dogs come into the clinic with obesity-related illnesses from overfeeding, or behavioural problems due to poor socialisation – the effects of loving an animal without understanding its needs.

One of the reasons we don’t change our behaviour in the light of evidence is the overwhelming force of habit. It’s a constant, daily battle.

She also advocates for continual learning and reviewing of established practices within veterinary science and animal science more broadly. One of the major achievements of animal science in recent years is the boom in evidence to support animal sentience (the ability of non-human animals to feel pain and pleasure, and to experience emotions in the same way that we do). As she became aware of this body of evidence, Quain decided to stop consuming animal products. “I felt that continuing to eat animal products was a conflict of interest,” she explains. “Surely the type of use we put animals to influences the type of life we will give them.”

Quain feels it is the responsibility of a good scientist to respond to scientific evidence by changing their behaviour and practice. She says, “Animal welfare science has provided us with enough evidence to justify behavioural change. One of the reasons we don’t change our behaviour in the light of evidence is the overwhelming force of habit. It’s a constant, daily battle.”

But Quain is seeing positive change. She sees veterinarians paying closer attention to their patients’ welfare, focusing on alleviating fear, pain, and discomfort, and investing in study to refine their practice to improve patient well-being.

Through her blog, Small Animal Talk, Quain shares information about animal welfare, encouraging colleagues and those with companion animals to reflect on their relationships with them. She also promotes veterinary continuing education and reflective practice, speaking to veterinary students and colleagues about how they can put animal welfare first. She advocates for animals by communicating scientific developments, such as the evidence around sentience, to the mainstream media, and influences policy relating to animal welfare by sitting on various committees. It’s a job that takes commitment and perseverance.

I felt that continuing to eat animal products was a conflict of interest.

“Sometimes I feel like my to-do list is a bit of a dog’s breakfast,” she says. “But if there’s a common thread, it’s about applying knowledge, learning, educating myself and others and making conscious, thoughtful choices about the way we impact these other creatures we share the planet with. And trying to translate my own “love” for animals into behaviour that genuinely benefits them.”