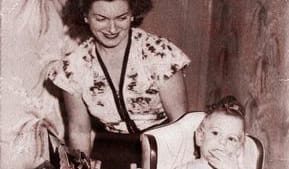 Why Women? My Mother’s Legacy of Empathy, Compassion, and Love

I‘m flattered and honored to contribute to Unbound. When I first heard about this collection I was thrilled to learn about it. It struck me that it was about time someone collected a series of essays about the incredible role that numerous women have played, and are continuing to play, in animal advocacy and activism, many of whom are well known and many who have been below the radar. It should come as no surprise that many women have done and continue to do an amazing amount of work for nonhuman animals (animals) both behind the scenes and out there for all to see. This work, of course, is done alongside many other daily commitments. Women have represented around 75% of people actively involved in the animal rights movement, but men have dominated the leadership roles, even in projects founded by women. It’s an understatement of royal proportions to say that Unbound is a very timely and an urgently needed corrective.

When I first became involved in “the animal movement” I was astounded by the large percentage of women who attended a wide variety of meetings. I once made a comment about this and a few women told me something like, “Well I try to get the men I know to come and they think it’s too ‘touch/feely,'” or “My partner wanted to come but his friends laughed at him.” The reasons spanned a number of “excuses,” but in the end many seemed to boil down to the feeling that working for animals and appealing to empathy and compassion were simply “too sentimental” and it made some men feel queasy. This is something I never understood. And I know a number of men didn’t either, but they chose to remain in the background for a variety of reasons.

I often think about my own commitment to working for other animals as a scientist. I was told early on in my studies that science is objective and that there was no room for compassion and sentimentality. The “just the facts” attitude prevailed. However, this seemed really odd and extremely uncomfortable to me as I grew up with a most compassionate and empathic mother, and from the time I was around 3 years old I was always asking my parents what animals were thinking and feeling. I wrote a book called Minding Animals that was published in 2002 and I came to realize that I’ve been minding animals and caring about them for decades. My parents assured me this was so.

I simply could not stand and still cannot tolerate hearing about or watching any form of animal abuse. I literally feel their pain and suffering, and I know it was my mother’s sensitivity, compassion, and empathy and my father’s unbounded optimism that were critical in fostering my own empathy and compassion for the suffering of vulnerable beings, nonhuman and human. I was really upset and disgusted when worms were killed and frogs were heartlessly pithed when I was in junior high school, refused to dissect animals in high school and college, and left a Phd/Md program because I simply didn’t want to engage in dissection and vivisection. While I received some support from a few men when I was in graduate school, most of the women with whom I worked were fully supportive, although some preferred to remain in the background because they didn’t want others to know how they were secretly feeling. After all, most scientists don’t want to come across as being sentimental because they fear being criticized or demeaned by their colleagues or that they will have problems securing funding for their research in a very competitive and unsentimental market.

I’ve had the honor of working with a number of women in the animal protection movement including Jane Goodall, whose mother Vanne accompanied her on her first trip to Tanzania (then called Tanganyika), and I’ve learned much from their deep and passionate commitment to working for other animals and their homes. Their passion was, and remains, contagious, and I’ve surely benefited from working with these strong and motivated women. And, it should be noted that Dr. Goodall was one of three women chosen by Louis Leakey to conduct arduous and dangerous fieldwork when there were extremely few female fieldworkers but many men doing this work. (The other amazing women were the late Diane Fossey and Birutė Galdikas.)

It’s about time that a celebratory project like Unbound was published, and, as I mentioned above, I’m flattered and honored to be part of it. Of course, there are many men who are making substantial contributions to the “animal movement,” but it’s absolutely wonderful and heartening–and long overdue–to see the women highlighted and celebrated for their own incredible accomplishments and leadership. We should all embrace this focus on the amazing women who have tirelessly and selflessly dedicated their lives to helping and caring for the other fascinating animal beings with whom we share our magnificent planet.

My mother was a wonderful teacher and I cannot thank her enough for always being there for me–through thick and thin–supporting me when I was thrown out of high school, and for supporting me when I didn’t want to be responsible for any forms of violence and abuse. The compassionate, empathic, and pacifistic home in which I grew up was central to my coming to work for other animals and humans in need, and central to my lifelong commitment to rewild my heart whenever possible. Thank you mom, and thank you Jo-Anne and Keri for doing all that you’ve done and continue to do. I’m sure Unbound will enjoy a wide and most appreciative audience as did Annie Leibowitz and Susan Sontag’s groundbreaking book called Women.

I’m dedicating this short essay to the finest of memories of my mother, Beatrice Rose, and to Lisa Shapiro. You’ll have to accept that my mother was a most amazing woman whose legacy lives on deep in my heart. I know she would love Unbound. And, those of you who knew Lisa know why, and those who didn’t, please take a moment to read about this unbound and most passionate, selfless, and accomplished activist.

Marc Bekoff is Professor emeritus at the University of Colorado, Boulder, and co-founder with Jane Goodall of Ethologists for the Ethical Treatment of Animals. He has won many awards for his scientific research including the Exemplar Award from the Animal Behavior Society and a Guggenheim Fellowship. In 2009 he was presented with the St. Francis of Assisi Award by the New Zealand SPCA. In 1986 Marc became the first American to win his age-class at the Tour du Haut Var bicycle race (also called the Master’s/age-graded Tour de France). Marc has published more than 1000 essays (popular, scientific, and book chapters), 30 books, and has edited three encyclopedias. His books include Ignoring Nature No More: The Case For Compassionate Conservation, Jasper’s Story: Saving Moon Bears (with Jill Robinson), Why Dogs Hump and Bees Get Depressed: The Fascinating Science of Animal Intelligence, Emotions, Friendship, and Conservation, and Rewilding Our Hearts: Building Pathways of Compassion and Coexistence. Marc’s homepage is marcbekoff.com, and, with Jane Goodall, www.ethologicalethics.org.