“Her Convictions Were Positive:” The Legacy
of Caroline Earle White

Caroline Earle White was a prominent figure in 19th century American animal advocacy. I was struck, however, when I learned that while she was growing up in Philadelphia she often went out of her way to avoid encountering animal cruelty. White would deliberately pick her walking routes so that she “avoided certain streets near her home because, in passing over them, she nearly always witnessed scenes of animal abuse which depressed her for days afterward.”* White was particularly disturbed by the sight of working horses being mistreated, and was overwhelmed by the cruelty all around her. Like many American cities at this time, Philadelphia had few regulations governing the treatment of the many animals who populated its streets.

While White’s reluctance to come face-to-face with animal cruelty is certainly understandable, what I find especially remarkable about her story is that even though witnessing cruelty caused her great pain, she eventually decided that she instead of avoiding it and pretending it did not exist she needed to get involved to try to do something to stop it. From the mid 1860s onward she became one of the most outspoken advocates for animals in the United States. White had been raised by progressive parents who introduced her to many different social justice issues as she was growing up. This upbringing gave her a point of reference from which she was able to recognize the ways in which many different kinds of oppression were linked. She was not afraid to speak out against cruelty and injustice, even if it meant that her words were met with ridicule and hostility as they frequently were. She was determined and did not let this criticism slow her down—as one historian has noted, “the agitation subjected her to ridicule but she moved steadily on, regardless of opposition, when her course seemed clear to her.”** 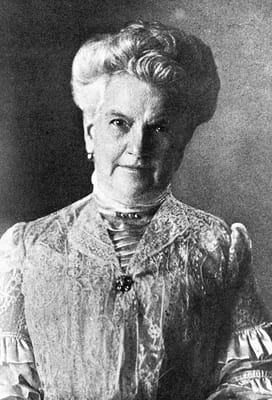 “There are many people who when we ask them to join us say that they prefer to work for human beings. But are we not working for human beings? Are we not constantly striving to make men and women more humane and disposed to all kindly feelings and to teach children to become gentle and merciful? Is not everything which tends to elevate man in the mortal scale a benefit to him” – Caroline Earle White

Today the legacy of White’s work remains a core part of animal advocacy—under her direction, the Women’s Branch of the Pennsylvania SPCA started a shelter for lost and stray animals which remains active to the present day and, of course, both the PSPCA and the American Anti-Vivisection Society also continue to do the work that White and her colleagues started in the 19th century.

Caroline Earle White with a group of WPSPCA supporters at a dedication for a new water fountain for horses. The fountain was built in honour of Annie L. Lowry who was a supporter of the WPSPCA.

Today we remember Caroline Earle White for her important advocacy work, but what if she had chosen to avoid encountering animal cruelty all of her life? Her decision to confront the disturbing cruelty all around her was incredibly brave and important, and I, for one, draw inspiration from her. It is tough as heck to bear witness and to not look away from suffering. And yet, as we see in the example of Caroline Earle White, it is also possible to draw strength and determination from these moments, to use these encounters to fuel a commitment to changing the world. In fact, I’d say without these moments it is pretty hard to shake ourselves out of our complacency about the status quo.