“I could never have imagined how successful
animal law would be.” 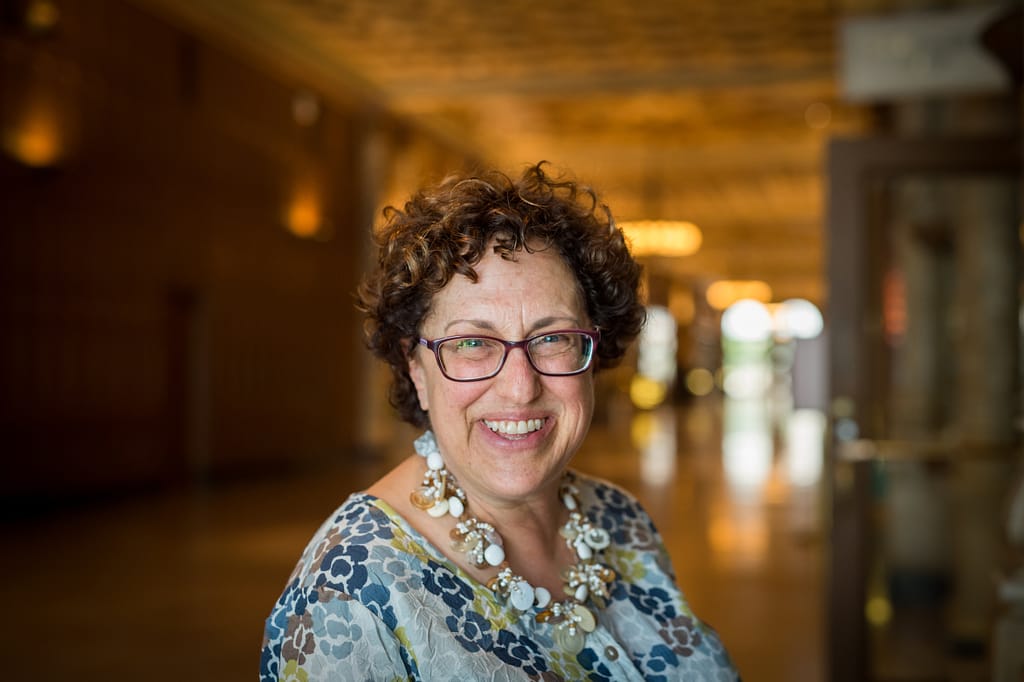 Joyce Tischler. All photos by Jo-Anne McArthur except where indicated.

It’s not just because Joyce Tischler co-founded the first and only animal law organization in the United States that she has been called the mother of animal law. (Joyce founded Animal Legal Defense Fund (ALDF) in 1979, well before animal law was a recognized field.) She’s also a mother to her own daughter and a self-described nurturer whose quintessentially female qualities of compassion and inclusivity have been credited by ALDF staffers for much of the organization’s success.

Liberty Mulkani, ALDF’s events coordinator, says when she first started with the organization, she was away from home for the first time and missing her family. Joyce would take her and her boyfriend to lunch to ensure they felt welcome, introduce them to people and teach them about the animal rights movement. Liberty says Joyce became like a second mother. And Joyce is like that with everyone who comes through the door, Liberty says. Over a decade later, Liberty is still with ALDF because of the welcoming atmosphere she says Joyce created within the organization.

But Joyce can’t be dismissed as a softie. ALDF’s executive director Stephen Wells describes Joyce as smart and no-nonsense. Indeed, it’s clear that she’s nobody’s fool, a courageous trailblazer who both forges ahead and pulls back when it feels right to her. As ALDF grew into a bigger organization needing more administration, she relinquished control to an executive director—Stephen—so she could continue to focus on what she loved best: developing the field of animal law.

Carter Dillard, ALDF’s director of litigation, echoes this praise. He credits Joyce not only for founding an organization in an unheard-of field in a male-dominated world, but for also setting her ego aside and recognizing when the organization had outgrown her. She genuinely puts the interests of the animals first, he says.

Jo-Anne from the Unbound Project team sat down with Joyce to chat about the field of animal law, how animal law fits into the broader animal rights movement, and one thing she regrets.

On the explosive growth of the field of animal law:

“I could never have imagined how successful animal law would be. If we’d done this 50 years earlier, we might have failed miserably. But the time was right, following the 1960s and 70s, the rise of the civil rights movement, the feminist movement, farm workers, the environmental movement—all of those came before us, and so our society was really ready for the animal rights movement and animal law. There’s a culture in the legal field of being open to new, creative, controversial ideas. If you look at the history of social movements in this country, lawyers have always been a part of it. I’m fascinated by social movements and the interplay between a social movement and what’s done outside the courtroom and how that influences what happens in the courtroom because it’s really a close connection.

We can’t get good law until society is ready for that law to happen. The law and how society works are so closely connected. It’s hard to see which comes first.

It’s a chicken and egg thing. With animal law, we’ve had to be conscious of that interplay between society and the legal field.

On working together and playing the long game:

No matter what you’re doing—whether you’re a photographer, or a lawyer, or a demonstrator, or an academic—nobody is working alone. We ARE part of a greater whole, and it all works together, and we need to be respectful of that. We need to understand that this is not a sprint, it’s a marathon. What we’re doing will create change and we might not live to see it, or a lot of it! If you were an abolitionist in the 1700s, you were dealing with a system that was so entrenched that it wasn’t going to end in your lifetime. Did you keep working? Of course you keep working! We have to think about the long term.

On influencing the next generation of influencers:

“By moving law into the mainstream we can create allies. If you teach animal law at the law school level, you get to people who are going to graduate and go into large law firms, become judges, become prosecutors, become legislators. So if you get ‘em in law school they’ll go out into the world and create change, and that’s been far more successful than we realized when we started doing this.

We are mainstreaming animal law into our own field so that when next generation is in court they won’t get laughed at.

We were laughed at in the old days! You can do so much when you mainstream. And you might say, yeah but you’re compromising… We’re lawyers. It’s a conservative field, but you can get so much done through it.”

On the gendered hierarchy in the U.S. animal protection movement:

On trying to get farmed animal protected and the role of the consumer:

“When we’re dealing with the biggest single issue, which is farmed animals, consumers are our biggest ally. It’s appalling and shocking that there are no—or very, very few—laws to protect farmed animals.

What do you do when you don’t have laws? It’s like being an actor with no script. You’ve got to figure out a way to get those animals protected and you’re bending yourself into pretzel shapes.

The kinds of cases that we take are consumer protection, labelling, environmental laws, clean water and clean air legislation—they don’t protect animals directly. It’s bizarre! So we have to look to consumers—they are setting the stage for what laws we will get or what case law we can possibly come up with.”

On what she’d do differently and the value of tenacity:

“I would say to my 25 year old self, get the fuck out of your way and just do the work.

Stop thinking you can’t do it, and set aside your “I’m not good enough” crap. That stuff just got in my way.

When I would just stop worrying about whether what I was doing was good enough, whether I was doing the right thing, whether I was getting enough done, whether I was smart enough, tall enough, male enough… when I just set that aside and just did the work, it got done. You don’t have to be the most brilliant lawyer. You don’t have to be the one who went to Harvard. Just do it. Just get out there, pick your project or pick your focus, dig in. … tenacity is a fabulous quality. I’ve learned that by being tenacious, and by just building, building, building, I could be good enough. We women tend to hold ourselves back and I regret that.”

On how to become an animal lawyer:

“Learn about animal law as much as you can, read as much as you can, and seep yourself in what the issues are, then decide what you want to do. What calls to you most? What’s your passion? Is it farmed animals? Is it wildlife? Or are you a generalist? I’m a generalist. And then figure out, okay, how am I going to make this my career? There are very few groups and very few jobs working directly in animal law. So understand that it’s going to be tough.

Maybe you work at an agency or you start your own. Or, think outside the box. Maybe you go and work at a county level where you can do all the animal work—and there’s lots, if you look for it. Take all animal cruelty cases. Or if you really have a strong stomach, maybe go work for the USDA—the belly of the beast—and try to make change from within. Wow, that would be hard to do! I couldn’t do it.

Learn more about ALDF and support their work.

This interview has been condensed and edited. Interview and photos by Jo-Anne McArthur. Editing and additional text by Anna Pippus.