“Once we fully understand that we are all equals, just with a different body, we will find the solution to all our problems.” 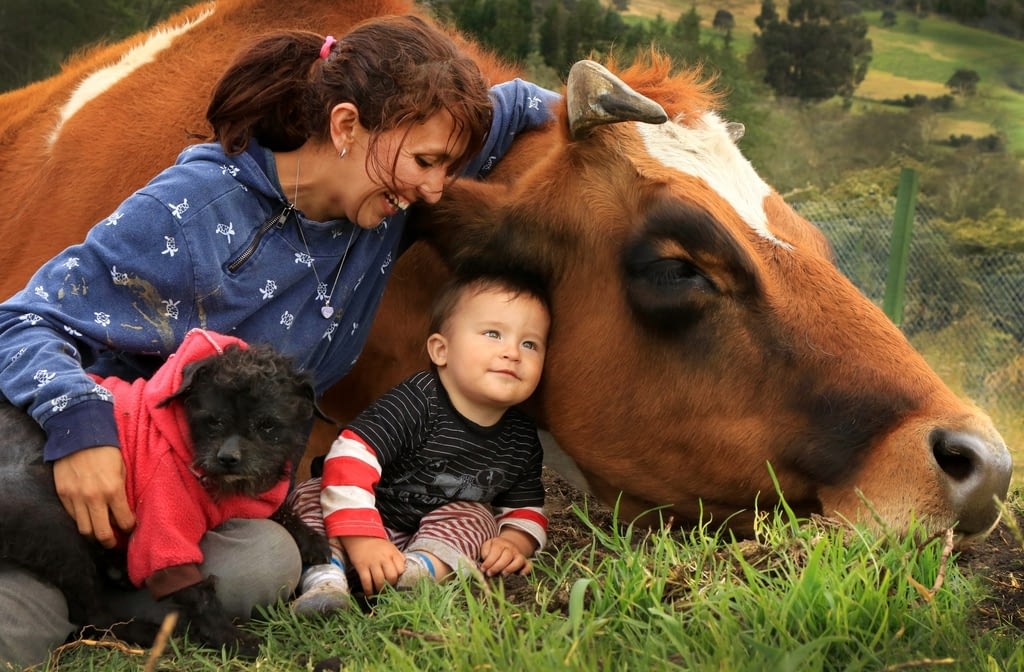 Castañeda and her son with sanctuary residents. All photos in this story taken by Julie O’Neill for the Unbound Project.

The first rescue Juliana Castañeda remembers was a little white dog she found on the streets of Colombia when she was seven. He was hungry and dirty, so Castañeda scooped him up and carried him home. She named him Copito, or Q-tip.

More rescues soon followed, including dogs, cats, birds and rodents. Castañeda even once brought home an abandoned little boy—street children are not uncommon in Colombia—whom she fed in her room for days before her mother discovered him.

To Castañeda, it was all the same: If someone needed help, you helped, regardless of species.

Once we fully understand that we are all equals, just with a different body, we will find the solution to all our problems.

Warm, sincere and endlessly nurturing, Castañeda is founding director of Juliana’s Animal Sanctuary, which she officially opened in 2008, although most of her life had been dedicated to the idea. Within a few years of finding Copito, she was selling chocolates and veggie burgers at school, saving all of her profits for her “dream.”

“I told my mother, ‘When I grow up, I want to buy a big house, and I am going to help all the animals in the world,’” she recalls.

A newly-hatched chick at the sanctuary

As much as Castañeda is a dreamer, she is even more of a doer. It is perhaps the best way to describe her: always doing.

Her recent pregnancy was no exception. She says the hardest part was the last week, when her belly got so big that she finally had to leave her animals’ care to volunteers. But after 20-plus hours of labor and the 10 p.m. home birth of her son, Bhimal, her belly was no longer in her way, so she was up feeding animals the next morning.

“I can’t remember the last time I sat down and relaxed,” Castañeda, who has dark reddish-brown hair and a bright smile, says laughing. “My body does get tired, but I love my work so much.”

Castañeda with her son Bhimal and rabbits at the sanctuary

That work includes far more than taking care of the sanctuary’s 80 or so animals, among them cows, pigs, horses, dogs, cats, rabbits, chickens, roosters and more—all of whom Castañeda considers her children. She also hosts sanctuary visitors, gives talks at local schools, fundraises, and promotes veganism through education, a meat-free Monday campaign and cooking workshops in Colombia and beyond.

And that is just one of her jobs. With only about a fifth of the sanctuary’s costs covered by donations, Castañeda helps make up the rest through online work as a Spanish language translator. She brings in additional money selling handmade jewelry.

On top of all that, she runs a robust local project as part of Food for Life, a global relief organization that provides vegan meals for the poor. Her husband, Australian Paul Turner, whom she met through Food for Life in 2013, helped start the nonprofit decades ago.

Turner’s experience and help have been instrumental in boosting support for the sanctuary from overseas; nearly all of its volunteers and donations come from outside Colombia.

“Colombia is not a rich country and is still very ignorant when it comes to animal protection,” she says, describing the country as an extremely challenging place to help animals.

We have a huge responsibility. We are literally the only hope and haven for animals in this country.

She says she can’t imagine doing anything else with her life, and it is the animals who keep her going.

“They give me all the energy to never stop.”

Chickens at the sanctuary

Chickens at the sanctuary

She offers the story of one in particular, a cow named Gita, who Castañeda rescued from a slaughterhouse 10 years ago. When Castañeda first saw her, workers were trying force Gita into submission by electrocuting her.

“They were trying everything to break her spirit, but she was determined to maintain her dignity,” Castañeda remembers. “I named her Gita, which means ‘song.’ Gita is an example for everyone. The animals are my inspiration. Even after so much pain has been inflicted on them, they still come to you with love. They know everything about forgiveness.”

It is by rediscovering our connection with animals, by meeting and spending time with them, that Castañeda believes we will learn to stop harming them.

She offers another example, a 1,300-pound bull named Balarama who came to the sanctuary as a calf and whose face is tattooed on Castañeda’s left arm.

“He is a huge animal, but he is like a kitten. He purrs and everything,” she says. Castañeda has seen him change nearly everyone who has met him.

“They’ve told me, they write to me, ‘He is my friend. I cannot eat animals again.’ He is connecting people to all the bulls in the world.”

Castañeda sees mothers and children as another key. Kids are naturally inclined to be kind to animals, but many have told her they couldn’t go vegan because of their families. So Castañeda decided to begin targeting moms.

“The mother is the boss of the table,” in much of South America, she says, “so we have to teach the bosses.”

Castañeda and her family

Castañeda always imagined that she would become a mom herself, but it was her efforts to reach others that made her want to have her son when she did.

“Before, many mothers were upset with me because their kids were turning vegan thanks to visiting the sanctuary or a vegan food workshop. They told me, ‘You don’t understand! You don’t have kids!’” Castañeda says.

“Now I can say to these mothers, ‘Yes, I really do understand.’”

Castañeda with Bhimal and Balarama

In addition to moms, she hopes animal activists can learn from her example.

“I live in a poor, crazy country, and I am doing this,” she says.

Learn more and support Juliana’s Animal Sanctuary.
Photos and interview for this story by Julie O’Neill. Text by Corrine Benedict.