“We want animals to have rights because of who they are.” 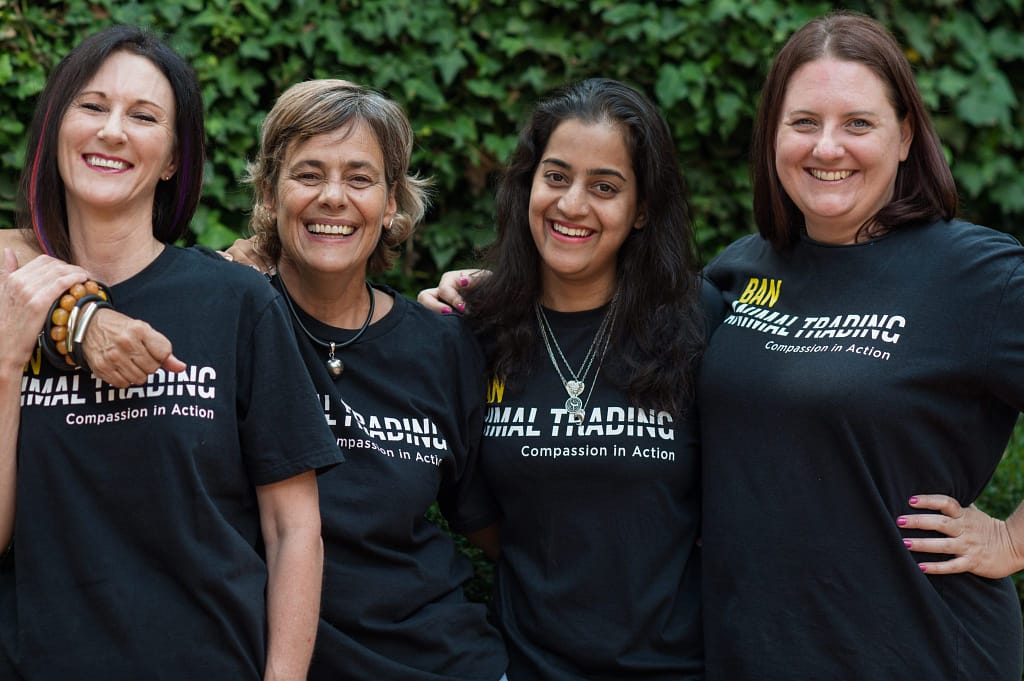 On Fridays in South Africa, animals on sale for weekend sacrifices are everywhere. For those who follow local indigenous traditions, births, deaths, weddings, and cleansing ceremonies are all reasons to end animals’ lives, often painfully.

Traditional healers here peddle tea made from pangolins. Endangered species are sold openly in busy markets. Tigers can be kept legally as backyard pets, and South Africa is ground zero for canned hunting.

This is a tough place to be an animal rights activist.

It’s a good thing Smaragda Louw is tough too.

A mother of two grown children who spent decades as a child psychologist, Louw is chairperson of Ban Animal Trading, or BAT, a South African non-profit that she co-founded with a handful of friends in 2013. Through education, investigations, protests, petitions, media campaigns and more, the organization is working to turn the tide for all sorts of animals here, from cats and dogs sold online and in pet shops to those used in circuses, for their fur, and for experiments.

“We don’t want South Africans to see animals as commodities,” says Louw, whose petite stature belies nearly everything about her. “We want animals to have rights because of who they are.”

BAT is only a few years old and has no formal office or paid staff. But already it has made a name for itself as a formidable force that doesn’t back down.

I’ve just always had a connection with animals, since I was small.

Louw’s reputation is much the same, and she looms especially large in the minds of South Africans who profit from animal exploitation. Energetic and engaging, she is the kind of person who is willing to go anywhere to help those who can’t speak for themselves, including places she knows she isn’t wanted, like chummy closed-door meetings between hunters’ groups and the government officials who are supposed to regulate them. Or to a crocodile farm where she’s recognized and told to leave before somehow getting in anyway. Or to a municipal rabbit park accused of massive neglect, where she chats up a manager until she is sitting behind his desk, dictating what must improve.

Smaragda Louw and a team member

Smaragda at the rabbit park

Says friend Liane Craigie, “She is not afraid of anything when it concerns animals.”

Nor is Louw willing to apologize for what she knows is right. Recalling her answer when someone asked her recently to justify her efforts in a country with its share of human suffering, she says, “Because people can actually talk, and because there are other people doing this for people, so I prefer to do it for animals. I don’t have a problem if you work for people. That’s absolutely fine. But don’t criticize what we do.”

It’s a passion whose beginning Louw can’t exactly pinpoint, but it started when she was young. “I’ve just always had a connection with animals, since I was small,” she says.

Smaragda at the rabbit park

A native of South Africa and a vegan, she has long been deeply disheartened by prevailing attitudes toward animals here, including the notion that animal rights is a movement only for privileged whites. For years while working as a psychologist, she dedicated whatever time she could to helping animals. She quit her job in 2010 to make activism her full-time purpose, co-founding BAT about three years later. The organization became an officially registered non-profit in 2015.

“Dealing with human problems and animal problems eventually becomes too much,” Louw says of leaving her first profession. “So, I chose to fight for animals.”

Of that choice, she says, “I’ve often thought there’s something in you that just tells you, ‘This is what you do.’”

By all accounts, Louw and BAT—now with a core team of eight women—do it well.

While the organization has embraced its menacing image to an extent, it has also been deliberate about not putting off potential supporters.

“Individually we may see things differently, but when we talk as Ban Animal Trading, we reach for middle ground,” Louw says. “We don’t want people to think we’re a fringe group. We want people to see us as something they can be a part of.”

That inclusive approach has served BAT well, with support for the organization—volunteers, media interest, online hits—exploding.

I’ve often thought there’s something in you that just tells you, ‘This is what you do.’

Indeed, Louw and some of BAT’s other core members have become so well known that they can no longer conduct undercover investigations themselves.

“She draws people in,” Cora Bailey, of Community Led Animal Welfare, says of Louw. “Smaragda has done so much for the profile of animal rights in South Africa. She’s been what people have needed.”

Another big part of BAT’s success has simply been how hard the team works. Some days Louw and her teammates are organizing marches and answering calls and blowing up social media with posts about the horrors of live-animal export. Other days they’re in the field, checking on cruelty and neglect reports, following up on cases and carrying out investigations.

“I think it’s really important to have new stuff coming out, to show people what is really happening,” Louw says. “I think it gives us a little more clout to get stuff done. We’re not just an organization regurgitating what everybody else gives us.”

Adds Prathna Singh, a core BAT activist, “We’re using stuff that we’ve actually seen ourselves, so when we try to fight something, it’s because we know exactly what’s happening, and we’re bringing that to the public.”

While Louw has no qualms about going head to head with animal abusers and officials who protect them, she also recognizes the importance of working with the system where it is beneficial. BAT produces meticulously researched reports on animal welfare issues, such as pet sales and wildlife trafficking, and submits them to authorities with petitions and recommendations for change. Last year, BAT successfully persuaded three of South Africa’s biggest online classified companies to stop certain animal sales, and it is now working for a total ban.

“It’s a long road that we’re walking and we know that,” Louw says. But, she adds, “We’re making progress.”

She admits the need surrounding her can be overwhelming: The calls are constant; Louw is always on the phone. There are far more issues to tackle than there is time. There are always more animals to help.

People and society are always the reason why policies change, so we have to start by showing people that the commoditization of animals is wrong.

It’s why she’s had to learn to let some losses go, and to pace herself.

“It’s OK to have duvet days and pajama days,” she says.

It’s also why BAT has made education and changing minds a top focus. While working case by case and issue by issue is valuable, Louw is convinced that real change will only come when there is a true groundswell of compassionate action for animals—which she says is BAT’s ultimate goal.

“People and society are always the reason why policies change, so we have to start by showing people that the commoditization of animals is wrong.”

Among the less conventional tools BAT is trying is a soon-to-be-published children’s book covering milk, leather, wool and more.

Even though Louw describes the status quo in South Africa as a “free-for-all” where “anything goes,” she says she also sees reason for hope.

She sees it in the pro bono lawyers who donate their time to help BAT and in the local thrift shop and comedy club that contribute some of their profits.

She sees it in the activists who turn up for BAT’s events and in the animals for whom they’ve made a difference.

Yes, she says, BAT has garnered strong opposition from animal traders and exploiters. But that just means she and her teammates are finding cracks in the system, prying them open and getting somewhere.

And with most people Louw meets, she says, she finds no opposition at all.

“When we start talking to people and giving them information—they watch our videos and see our Facebook page—most people are actually really grateful, because they say they didn’t know.”

She sees it often when BAT hands out flyers outside of zoos and circuses and other places where animals suffer.

“People turn around and leave,” she says.

“Because they didn’t know.”

Thanks to Louw and her team, more people than ever know the truth, and one flyer and one rescued animal at a time, their work is changing the fate of animals in South Africa.

Learn more about Ban Animal Trading and support their work.