“Motherhood does not exist to be owned,
commodified, or invaded.” 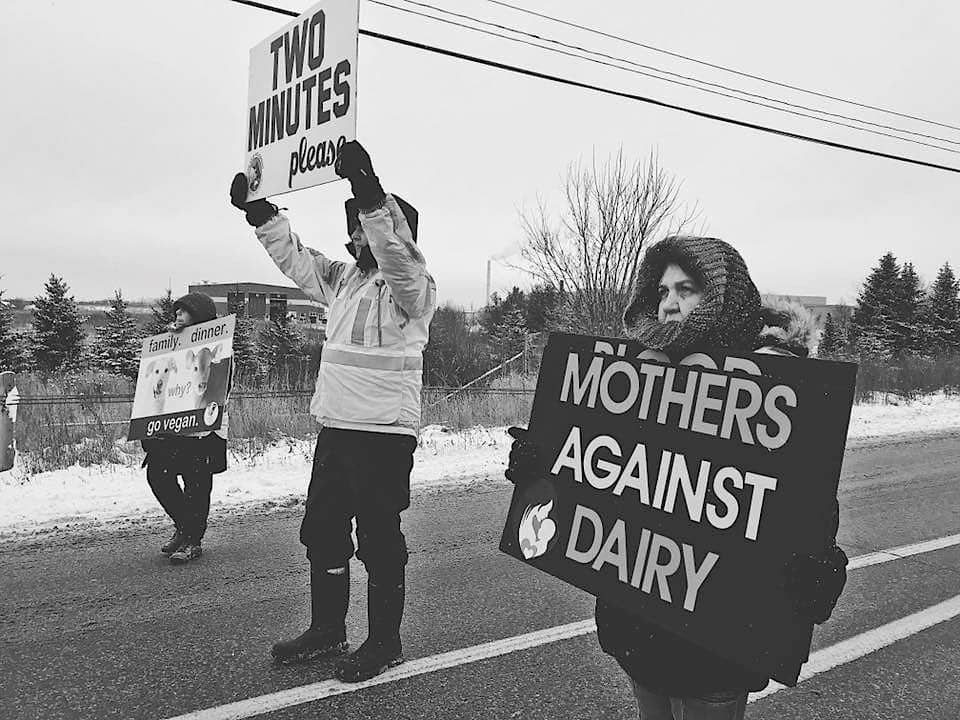 Ashley Capps is a writer, editor, and researcher specializing in farm animal welfare and vegan advocacy. She is also the Founder and Director of the Mothers Against Dairy campaign, a powerful anti-dairy campaign. To mark Mother’s Day, we asked Ashley about how the campaign came to be.

You have mentioned it was a bit unexpected to find yourself running a campaign focused on mothers when you yourself are not a mother. Can you elaborate?

That’s right!— I am not myself a mother. And, with much love and respect to the many amazing mothers I know, I don’t plan on becoming one. For me, there are just too many beings in this world already who are in need of love, care, and protection. As long as there are shelters full of healthy cats and dogs being destroyed every day simply for lack of adopters, I feel like my abilities as a caregiver are best directed at providing a home and family to as many needful animals as time and space allow.

Why did you start speaking out against the dairy industry in particular?

As a vegan, I am opposed to all forms of exploitation, but I have always found the dairy industry particularly galling. With dairy, we are literally farming mothers for their breast milk. Just think about that for a minute. We force these animals to become mothers, to carry their babies for nine months, and then we steal those babies from them in order to facilitate our theft of their maternal lactations— their child’s baby food— so we can turn it into ice cream and cheese.

For me, the very idea of breeding individuals into existence in order to force them to become mothers so we can needlessly invade and parasitize their mothering relationships is so violently entitled, so deeply offensive, and profoundly anti-mother.

While the dairy industry works tirelessly to position animal milk as a necessary and natural foodstuff for humans, they cannot erase the biological fact that in all species of mammals, mothers’ milk is very specifically baby food, and cow’s milk is for baby cows— just as goat’s milk is for baby goats, sheep’s milk is for baby sheep, and human milk is for young, developing humans. That’s what the stuff is for, and that’s why we are weaned.

Ask any regular milk and cheese consumer to swig a glass of breast milk from a consenting human mother, and they’ll look at you like you’ve lost it. Heck, try recommending the mothers’ milk of any other mammal apart from cows, goats, or sheep as a menu item, and most people will recoil in disgust.

So how is this bizarre cultural dissonance maintained? Much like the tobacco industry, now notorious for its predatory and misleading campaigns, the dairy industry depends upon constant rebranding and investing in a diverse array of authority/celebrity figures for its messaging— from doctors and nutritionists, to million dollar campaigns spotlighting actors and athletes, all insisting how wholesome and good for you— crucial, even— ruminant animal baby food is.

And now the dairy industry is using women and mothers in their messaging?”

Yes. As someone who researches the dairy industry regularly, I have observed over the last few years a distressing surge in pro-dairy messaging from an increasingly visible and vocal sector of animal agriculture: female dairy farmers, most of whom are mothers. It is painful and disturbing, to say the least, to see these mothers defending the reproductive subjugation of other mothers, and the destruction of other mothering relationships for profit. But this growing trend is no coincidence; rather, in a climate of increased criticism of cruel dairy farming practices, it represents a strategic industry shift to put more female faces on dairy farming, and to reframe this mother-exploiting industry as a maternal, nurturing one.

From articles like “Why Dairy Farming Needs Women,” which notes: “Farming needs women and all their positive traits,” to the annual Women In Dairy Conference, whose organizers proclaim: “As women, we are inherently empathetic… bound to carry our message of agriculture’s value, wholesomeness and sustainability to a broader audience,” to global industry initiatives like Women in Dairy, Celebrating Dairy Farm Moms, and many more popping up all over the world.

Alongside these initiatives, women and mothers in dairy farming are being incentivized to take to blogging, facebook, instagram, and other high visibility platforms in order to paint dairy farming as an industry of care and nurturing, with a special focus on defending the cruel and routine practice of taking calves away from their mothers.

How ironic, this incessant valuation of family when dairy farming itself is based on devaluing and destroying animal families. Worse, putting these female, maternal faces on the dairy industry gives it a lot more credibility with concerned consumers.

So Mothers Against Dairy is a counter-narrative to this messaging?

Yes. As I observed with increasing frequency the disingenuous and disturbing trend of using human mothers to justify exploiting nonhuman mothers, it occurred to me that creating a platform for vegan moms to share their own reflections about dairy farming could provide a much-needed, powerful counter-narrative. As I mentioned, my work as a writer is frequently focused on dairy, and for years now, I have received comments and messages from vegan mothers relating that the process of becoming a mother was what woke them up to the injustice of dairy farming (and, eventually, led them to go vegan).

Originally, the idea was to publish a one-time Mother’s Day collection of reflections on dairy from vegan mothers to feature at Free from Harm in 2016. But soon after I launched the call for submissions, so many powerful and heartfelt statements began pouring in. I selected 10 of the most impactful for the initial Mother’s Day feature, but as entries continued to come in and as I watched how popular the Mother’s Day piece was, it was clear to me that this should become an ongoing campaign.

And so it has. On Mother’s Day of 2017, the Mothers Against Dairy website was launched, and with now more than 30,000 followers, we continue to publish new statements regularly, and have lots of exciting new projects in the works. To date, we have received statements from mothers in Brazil, Canada, England, Australia, New Zealand, India, and the U.S. We’ve featured reflections on dairy and motherhood from mothers of twins, single mothers, mothers who adopted, mothers who miscarried, mothers who gave birth in their 40s, and mothers who gave birth in their teens. What unites them all (among other things) is the belief that motherhood is an inviolable relationship that belongs to no one but the mother and child; that motherhood does not exist to be owned, commodified, or invaded for cultural tradition, commercial profit, or culinary pleasure; that motherhood should never be a thing we exploit.

Could you give us a few samples of some of your favorite statements?

Here are a few snapshots of some of the most powerful reflections Mothers Against Dairy has received to date.

Is there anything else you’d like people to know about Mothers Against Dairy?

Yes! While the stories and perspectives being spotlighted here all come from mothers, this campaign is in no way intended to suggest that you need to be a mother in order to make this connection. Not at all. But in a culture where human motherhood is celebrated as this sacrosanct phenomenon, regarded as the strongest and most indelible of bonds, I think that mothers speaking out against dairy, and against the exploitation of all motherhood, offers an important perspective about shared experience and the need for collective empathy. And I believe that this perspective may be uniquely poised to resonate with those who might otherwise turn away from conversations about dairy cruelty.

As featured mother Jo’Vonna Johnson-Cooke says in her longer statement at our website:

“While being a mother viscerally reinforces my belief that all children and mothers have a birthright to maternal care and companionship, this is something we should all understand as human beings. Being human affords us the responsibility to innovate and shape our interactions with our environment and other living beings in a way that causes the least harm. And it is our humanity that I would hope would cause us to pause and consider the implications of exploiting motherhood and sacrificing lives and families to take something we do not need.”

Ashley Capps is the Founder and Director of the Mothers Against Dairy campaign. She works as a writer, editor and researcher specializing in farmed animal welfare and vegan advocacy, and is a core staff writer for the food justice non-profit A Well-Fed World, and the animal justice non-profit Free from Harm.
Read more from the Mothers Against Dairy archives and learn more about the campaign on their website, Facebook, Instagram, and Twitter.