Piia Anttonen is the Director of Tuulispää Animal Sanctuary in Finland 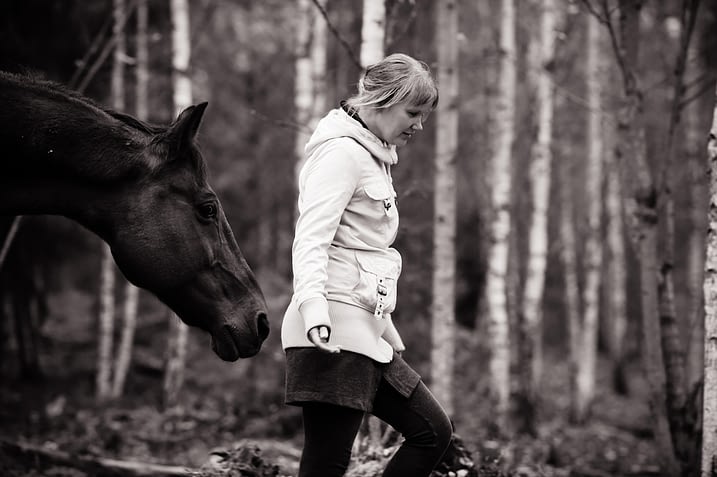 Piia Anttonen with ex-racing horse Igor. There are so many unwanted horses from the racing industry, and most usually end up being sent to slaughter.

New hay arriving at the sanctuary. Tuulispää does not have its own farm equipment yet, so Piia Anttonen is grateful for the help she gets from the neighbouring farms.

Piia Anttonen is the Director of Tuulispää Animal Sanctuary in Finland, an organization that cares for and provides “forever homes” for many different kinds of animals.

Anttonen is driven to help animals in need, and traces this back to a particular visit to a horse auction a year before founding Tuulispää Animal Sanctuary. On that day she was looking to buy a companion for her horse and went to see two different horses–a beautiful white horse and an older, somewhat scruffier horse who was being totally neglected by potential buyers. She decided she wanted to buy the white horse, but by the time she had made this decision another buyer had already purchased him. She left that auction without a horse, but later realized the “huge mistake” she had made. “I was angry at myself for being so stubborn,” she recalls, “How could I have been so stupid? Of course I should have taken the horse that nobody wanted! After this realization I saw animals in a very different way.”   This incident left her reflecting upon how we choose to treat certain animals, and she decided that from that moment forward she would do what she could to help the animals most in need, the elderly, the sick, the abused, and the neglected.

Piia Anttonen with Siru, one of the four members of a sheep herd who was going to be slaughtered.

Anttonen feels that one of the hardest things about running a sanctuary is saying “no” to the constant requests to take in more animals. She finds it heartbreaking to not be able to take in every animal in need, but knows how important it is to not let the sanctuary get overcrowded. She is dedicated to ensuring that she is not overwhelmed and is able to give enough attention to the animals already living at Tuulispää Animal Sanctuary. She is working on developing a foster and rehoming program so that she can help more animals in need.

Taking care of the property and caring for all of the animals who live there is a lot of work, but Anttonen is grateful for the assistance of her parents and for the many volunteers who help out.

Piia Anttonen and her first dog Miki looking out at Tuulispää Animal Sanctuary.

In addition, Anttonen is also dedicated to humane education and promoting a vegan lifestyle. She is very well-spoken and, as one of the volunteers at Tuulispää Animal Sanctuary said about her, “She’s very effective in promoting veganism. She has found a good balance in speaking about it, connecting people, food, ethics, and cruelty without being preachy. This is one of her strengths, and her message and facts are clear.”

Anttonen started Tuulispää Animal Sanctuary in 2012 after being inspired by a similar farmed animal sanctuary in Canada. Since Tuulispää was founded dozens of animals have found peace, safety, and sanctuary here. In this beautiful location in the Finnish countryside horses, cows, sheep, goats, ducks, hens, roosters, rabbits, guinea pigs, dogs, and cats peacefully co-exist. At Tuulispää Animal Sanctuary many different kinds of animals live together in the same spaces–the horses, goats, cows, sheep, and pigs are in the same enclosure and can choose their own social groups, sometimes making friends with animals from another species. It sometimes get tricky at feeding time–the goats have figured out that they can go right under the bellies of the horses in order to steal their food!–but overall the animals are happy living with one another.

Piia Anttonen holding Kaaleppi, a very lucky rooster. He has avoided three death sentences, including one when he was first born. He was mistaken for a hen when he was little and was allowed to live because of this mistake. Male chicks have no function in the egg industry and, as a result, they are often killed shortly after birth. Kaaleppi is one of the lucky few who survived.

Anttonen has also rescued Otto the fox, who was found wandering around a nearby farm looking for food. He appeared to have escaped from a fur farm because he had injuries consistent with those often found on animals raised in these kinds of places. Otto now lives at Tuulispää Animal Sanctuary but is still a “typical fox” and wary of most humans. Anttonen has been doing “clicker training” with Otto so that she is now able to trim his nails and give him medicine.

One of Anttonen’s dreams for Tuulispää Animal Sanctuary is to build a museum and educational centre that outlines the history and chronology of Finnish animal rights campaigns. She envisions that this would include interactive displays and would focus on topics like fur farming, meat, dairy, and egg production, as well as animal testing. She would also like to have camps for children, where they could come and spend time at the sanctuary and get to know the animals who live there as individuals.

Tuulispää is located in Somero in Southern Finland. Group visits are available by appointment, and open doors events are organized regularly in the summer and occasionally at other times of the year.
If you are interesting in learning more about Tuulispää or volunteering at the sanctuary, please contact Piia Anttonen at +358 (0) 45 672 1503 or info@tuulispaa.org.