“When a Woman is Educated, She Looks Beyond Her Nose and She Can See Far” 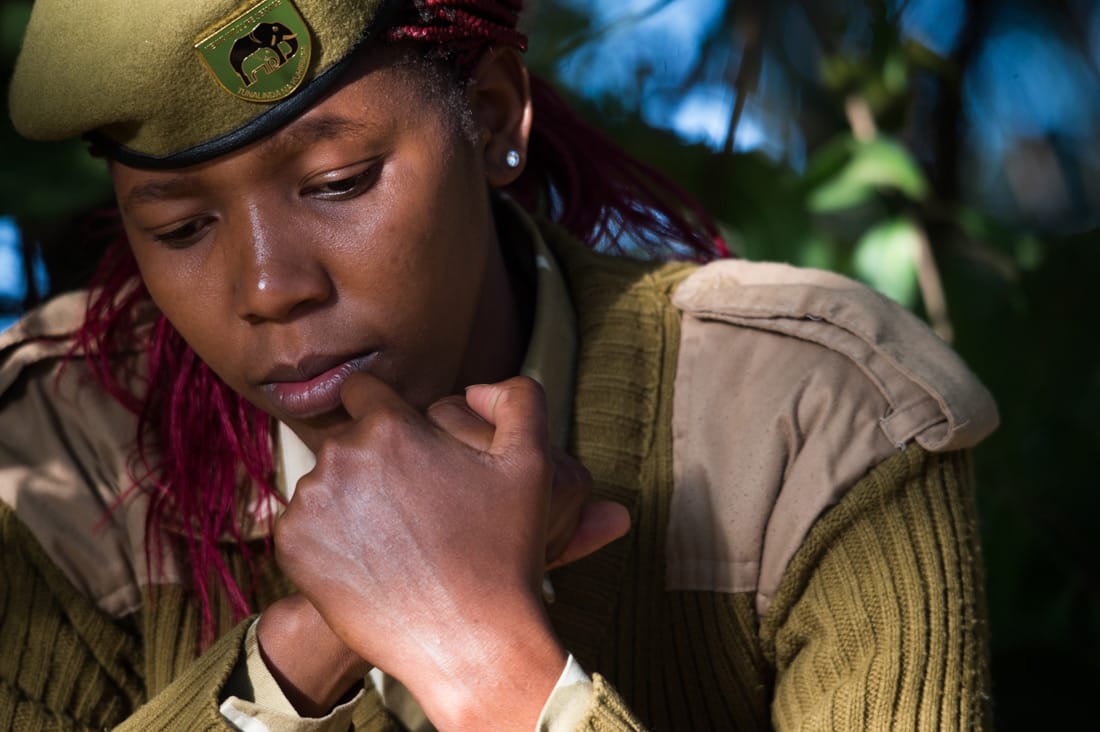 Ledaiki Ann Nailateni is one of only a few Maasai women working with the Kenya Wildlife Service and we recently interviewed her about her commitment to protecting the wildlife of Kenya from poaching.

Ann exudes warmth and happiness about life. When she was given the opportunity to go to school, she took it, and has never looked back. She is fuelled by her passions and her gratitude for the opportunities she was given as a young orphaned girl. In return for her good fortune, she wants to, and does, give back to others.

Unbound Project: Can you tell us a bit about the Kenya Wildlife Service and the training you had with them?

Ledaiki Ann Nailateni: I joined the training last year and in this training I learned how to use a gun and how to be near animals. They wanted good things from us, because of the problems of poaching in Kenya. There were only two girls and fourteen boys chosen to be part of this training from our Maasai community, so I was among the luckiest out of 600 girls who had wanted to be part of the Kenya Wildlife Service.

The organization started to help me in 2009. They took me, first of all, an orphan girl, the last one born in the family. I had a passion of going back to school, and I came here and graduated high school. I joined college and did a certificate in Conservation Wildlife and management. I really appreciate the help of Mia MacDonald (co-founder of the East African Young Women’s Leadership Initiative and Brighter Green, who will also feature in the Unbound Project) as she is the one who made me love animals. Mia said to me, “why can’t a woman do this?” And she was right – I thought, “Why not me?”

U.P.: Who are the people that inspire you?

L.A.N.: In Africa, women are not often seen as useful to the community. So women like Wangari Maathai, who started the Green Belt Movement, are really inspiring to me. I really love her so much because she fought so hard for the environment. As women, maybe our voice will not be heard as much as the man’s voice, but I am following her — the cutting of trees, I can’t allow that; the clearing of animals, I can’t allow that.

U.P.: What is the greatest threat to wildlife in Kenya, and what is being done about it?

L.A.N.: The greatest threat is poaching. People are using new technology to poach nowadays. They use some funny machines to silence their guns, so you can’t get them. But in Kenya they are really trying to improve things, like they are putting cameras everywhere. And in South Africa they are training more soldiers.

U.P. What’s your relationship like with the animals in the park?

L.A.N.: The animals are my friends. The people come from far and want to see the animals, so I have to conserve them. And second thing, I get paid a salary as a soldier–visitors come, pay the conservation fee. I have to go to school with the money I earn, I have to pay for my house and to eat and to get dressed. So the animals give me employment.

U.P.: Has your relationship with animals changed since working here? Do you see them differently before than you do now?

L.A.N.: Yeah, when I first started I could not go near a lion, but now I can. But, in some ways, things have not changed that much because I come from a Maasai community and we live with the animals, the wild and domestic.

Working with the animals gives me courage. Before I could not work at night because I used to think that night shifts were “a man’s job.” But in the training, you’re taken into the field and you spend ten good days alone, one person maybe a kilometre away, so you learn to listen to the jungle. This experience makes me feel that I can stand on my own. I don’t need a man to say it, I can be heard.

U.P: What is the most memorable moment you have had in the park with the animals?

L.A.N.: During night patrols we make a small hole in the ground and hide overnight. One night during my training it was my turn to be on patrol, so I had to spend the night in the hole I had made. At one point in the night a warthog was being chased by a hyena, and the warthog came and jumped in the hole with me for safety. [laughing] I was so startled that I screamed, and then the warthog jumped out and the hyena ran away because it heard my voice. I really enjoyed it. It was the best thing ever!

U.P: What do you think is the future of wildlife in Kenya?

L.A.N.: The future is still good because many people are coming out and fighting for the rights of the animals. Right now, the animals who are indigenous are the ones who are in biggest danger now, especially the rhino. This is because many people kill rhino just for their horn. But things are getting a bit better — as conservationists, we’re working on it. I still have hope, and my hope will not die.

U.P.: What are your dreams and aspirations?

The second thing is I want is to study, so much. I want to become like Waangari Mathai, to be known everywhere. In fact, I want to win a Nobel Prize too. And also, I want to be the voice of women in Maasai community. You know, people are being circumcised, being married young. I want to help those women and I want to see them like me now. I want those who are in darkness to come to the light and know the goodness of being educated and know about what is going on.

U.P.: What do you think is the role of women, especially young women like yourself, in helping to protect animals and their habitat?

L.A.N.: The role of a woman in any community is really big. When a woman is educated, she looks beyond her nose and she can see far. In my experience, a woman will often take action more than a man because she has more interest in issues of others.

U.P. Can you tell us what it is like being out here every day?

L.A.N.: I learn many different things from different people. Being here in Nairobi National Park is really enjoyable, and I really appreciate the environment and the animals around me. At night you can’t sleep because of the lions “RAAAR” [laughing], so you really enjoy it. I was suffering before, before the training, but now I can stand for myself. I am really happy. And I have a passion for animals and the environment.

U.P.: Which animals do you feel most connected to, and which the least?

L.A.N.: I feel connected to all of the animals here, because I work with all animals, I see all of the animals. Though I fear buffalo, I can still work with them. So, all animals are important to me. But I have to say, I don’t like the poachers. Poachers don’t only harm the animals, they also cut down the trees. You know, everyone has their own passion. Mine is the environment.

U.P.: Did it take you a while to find that passion or was it always in you?

L.A.N.: It was just in me. When I was young in my home I always loved to plant flowers. You know, we start caring when we are born.

U.P.: Is there anything you want to talk about that we haven’t asked you?

L.A.N.: I thank the East African Young Women’s Leadership Initiative for bringing me up, because without them I could be a grandmother now with ten kids [laughing]. I have a good job and I have to stand on my own. I also want to help others who come from similar backgrounds. I want to help the Maasai girls, to help them escape them from early marriages, circumcision, early pregnancy.

L.A.N: I want to say to the youth, planting one tree is like saving the lives of ten people. We need to do this, because we, the young people, we are the ones who need this now, not the old people. So as youth, let’s conserve the environment, let’s stop poaching, let’s stop cutting down trees.