“Most people… tend to be ignorant of the processes by which food reaches their table, or if not ignorant they find it more comfortable to forget.”

M any activists can point to a single moment that changed their lives—a photograph, a movie, a conversation, or a chance encounter that forced them to think differently about the world around them. For British activist Ruth Harrison (1920-2000), that moment took place in 1961 when she was handed a pamphlet outlining how animals were treated in Britain’s factory farming system. Like many people, Harrison hadn’t thought much about modern, industrial farming methods prior to receiving this campaign literature from an activist who had been leafletting with an organization known as “Crusade Against All Cruelty to Animals.”

Harrison was deeply shocked by what she saw in this leaflet and this compelled her to take action. As a recent biographer noted, “despite being a vegetarian, she reasoned that, although she did not eat them, she still had a responsibility towards animals.”[1] Harrison began to research the claims made in the pamphlet to find out the truth about factory farming for herself. What she discovered was worse than she could have imagined; reading about things like veal crates and battery cages filled her with horror and dismay. She described factory farming as “production line methods applied to the rearing of animals, of animals living out their lives in darkness and immobility without a sight of the sun, of a generation of men who see in the animal they rear only its conversion factor into human food.”[2] Harrison felt driven to share her findings with a broader audience, reasoning that if she had not known about the reality of industrial farming then many other people likely didn’t either. 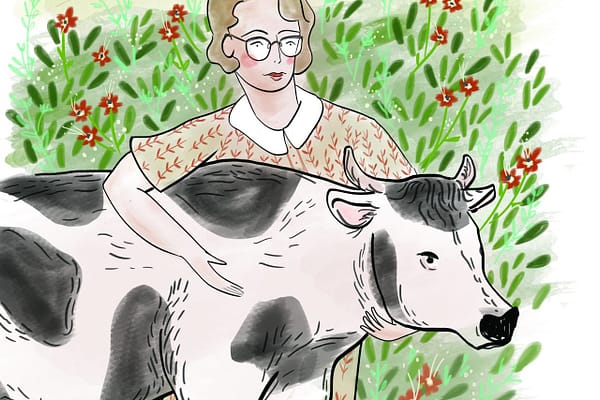 In 1964 Harrison published Animal Machines: The New Factory Farming System. This book was meticulously researched and included details of things that Harrison had witnessed on her fact-finding missions to various farms across Britain. She was inspired by Rachel Carson’s groundbreaking work Silent Spring, a shocking account of the health and environmental effects of pesticide use. She was so inspired by Carson’s work, in fact, that she wrote to her and asked if she would write the foreword to Animal Machines. Even though the two women didn’t know one another, Carson agreed because she understood the importance of this project.

Animal Machines also included a number of photos illustrating the ways in which animals were raised, confined, and killed on factory farms. Many were taken by Ruth’s husband, Dex. Harrison realized that part of the reason that so many people blindly accepted the treatment of farmed animals was that the marketing of meat, dairy, and eggs drew heavily on idealized images of farms as peaceful places where animals are treated well. She wrote:

“Farm produce is still associated with mental pictures of animals browsing in fields and hedgerows, of cows waiting patiently in picturesque farmyards for the milking, of hens having a last forage before going to roost or sheep being rounded up by zealous dogs, and all the family atmosphere embracing the traditional farmyard. This association of ideas is cleverly kept alive by the giants of the advertising world who realize that the public still associates quality with healthy surroundings. A picture of the close-tethered veal calf standing uncomfortably on slats in its gloomy crate, the battery hen cramped in the cage, the closely packed, inert mass of pigs on the floor of the sweat-box piggery, or the sea of broilers in their dim shed, would not, they rightly surmise, help to sell their products.”[3]

The photographs in Animal Machines, then, played a powerful role in interrupting this advertising fantasy.

The publication of Animal Machines sparked a powerful reaction. It led the British government to order an investigation into factory farming practices. Because of her ground-breaking work in this area, Harrison was invited to be part of the team undertaking this work. The results of this investigation were made public in 1965, leading to major changes in animal welfare (e.g.: the concept of the “five freedoms” for farmed animals stemmed from this initiative). The following year, the Farm Animal Welfare Advisory Committee, another government initiative, was struck and, once again, Ruth Harrison was invited to be part of this committee. The discussions and findings of these committees led to a new farm animal welfare law, The Agriculture (Miscellaneous Provisions) Act, which came in to effect in Britain in 1968.

Ruth Harrison remained involved with animal advocacy work for the rest of her life, taking on consulting roles with such organizations as the Animal Defence Society, the Royal Society for the Prevention of Cruelty to Animals, and the World Society for the Protection of Animals. Her groundbreaking work is often overshadowed in the history of animal welfare/rights—as Carol J. Adams points out in the guest essay she wrote for the Unbound Project, it is important that we recognize the efforts of Harrison and of all of the women who worked so hard for animals in the early days of organized animal advocacy.