“Young people have such an inspiring capacity to hope and dream which is what we need to keep building momentum to push this movement even further!” 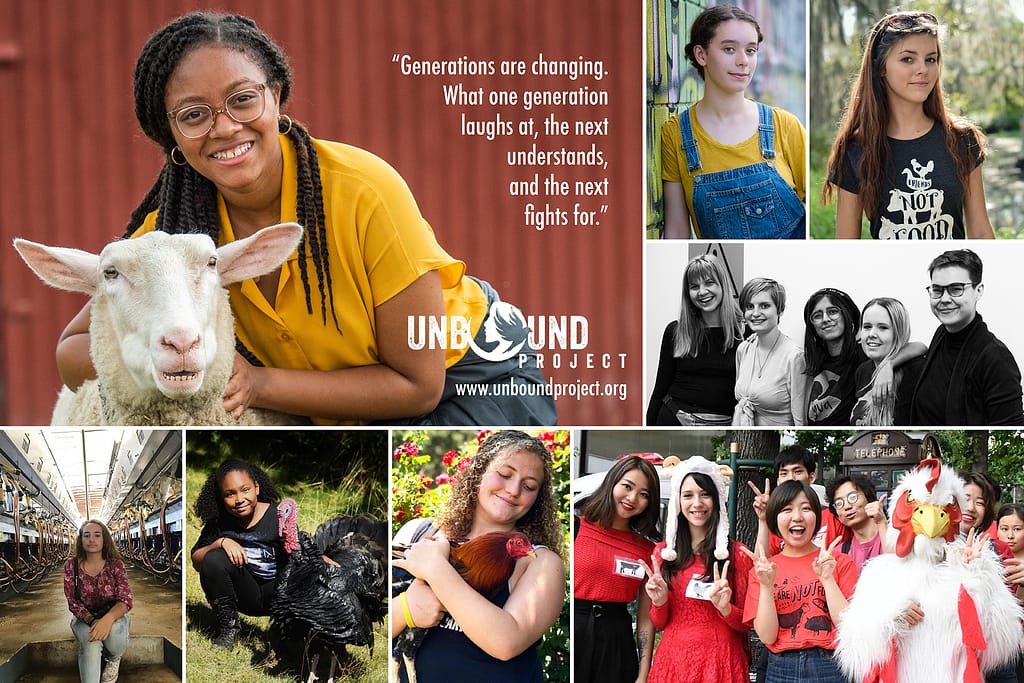 The face of animal farming is changing. As industrial farming spreads to all corners of the world, the fate of billions of animals hang in the balance and the effects of raising animals for food are becoming clearer. The environment is on the edge of catastrophe, human health is being compromised, and hunger is affecting more people than ever.

But there is cause for hope! A new generation is on the rise, bringing with it innovations and a fresh world-view. Veganism is the fastest growing social movement, and young people are speaking up about the challenges that threaten our future. Through tireless passion, dedication and command of new ways of communicating and organising, young people are challenging the injustices of our world, and demonstrating that there is another way.

Haile Thomas is a vegan activist and social media influencer, and, at just 17 years old, is the youngest Certified Integrative Nutrition Health Coach in the United States. She founded non-profit The Happy Org to bring plant-based nutritional education to youth in some of the country’s most underserved communities and to empower young people and their families to make health and lifestyle choices that are good for them, for animals, and for the planet.

“Knowing that I can contribute positively to the changing narrative surrounding veganism and also that every dish I order, every trip to the grocery store I make, and every bite I take makes a difference and a statement to the world, means everything to me. “

Zofia Pawelska is the 22-year-old founder of Lab Rescue, a Polish not-for-profit organisation dedicated to rehoming animals used in scientific testing. Since arranging to take 16 rats from a laboratory two years ago, Pawelska has built relationships with laboratories to promote adoption for animals who have been used in research. She says that people in Poland are becoming aware of the use of animals in laboratories, and that there is a trend building to adopt rescued animals, rather than buying them from a breeder or pet store. Lab Rescue is bridging the gap between laboratories that seek an alternative to euthanasia for animals, and families wanting to offer a loving home to them.

“Before Lab Rescue, laboratory animals were forgotten, but now I can see it’s common to have a rat rescued from a laboratory, not bought from a shop.”

Yuri Suzuki is the 22-year-old founder of Animal Rights Center Students, a student group of the Animal Rights Center, Japan, where she also works in corporate relations for farmed animal welfare. The group, which is open to middle school, high school, and university students, does outreach work such as leafleting on campuses, as well as community building through study groups and vegan social events. Animal Rights Center Students aims to expand its network of advocates, empowering young people all over Japan to engage in animal rights activism.

“I first came to learn about the suffering of animals when I was studying abroad in California and meeting many vegetarians and vegans. After returning to Japan, I was shocked by how few young people were working for animals here. There are many club activities on my campus, but there was no club working for animal rights and welfare, and I thought that there should be.”

Zoe Rosenberg is a 16-year-old animal rights activist and the founder of Happy Hen Animal Sanctuary, a California-based sanctuary for abused and mistreated farmed animals. Rosenberg founded Happy Hen when she was just 11 years old, and since then she has saved over 600 animals from the food industry, sharing their stories with the world. This year, Rosenberg received media attention when she was arrested for chaining herself to a slaughterhouse chute while protesting the exploitation of cows at the meat processing plant at California Polytechnic State University.

Rosenberg is also a sought-after speaker, who shares the story of her journey in activism to change the perception of activism as something extreme, and inspire others to take action for what they believe in.

“I spent my entire childhood dreaming of starting a dog and cat rescue. At school, I would walk around asking people to sign petitions to ban puppy mills and hand out information about local dogs who needed homes. It never once occurred to me that there were other species who needed help, let alone other species that needed help significantly more than dogs and cats.”

The women of Young Voices for Animals

Young Voices for Animals (YVA) is an Australian non-profit organisation dedicated to educating and empowering young people to build a better world for all animals. Harley McDonald-Eckersall, 21 and Kianna Hope, 25, are two of the members who founded YVA in 2017, and they have since been joined by Emmy Montgomery, 24. These young women are part of the powerhouse team leading the way for youth animal advocacy in Australia, creating events and workshops, to inspire and engage young activists. This year YVA launched Catalyst, a leadership and development program that supported 15 passionate young people aged 15-19 to become effective change-makers for animals. They also hosted Australia’s first ever Youth Animal Rights Conference.

“YVA was started because a few of us developed the same realisation that, whilst there were a lot of young people who were really passionate about making a better world for other species, there was a lack of youth specific groups who were dedicated to building empowering communities for young people.”

Mónica Salvado is a 17-year-old animal rights activist from Portugal, working to expose the suffering of farmed animals, and raising awareness about the reality of life inside Portuguese industrial farms. Salvado uses her Instagram account @thisveganteen_ to show the lives of animals who are kept invisible behind the walls of factory farms and slaughterhouses. She is currently planning an activism tour of Portugal during which she will give lectures about The Save Movement, and host vigils showing people simple ways that they can get involved in activism.

“After seeing all the things I’ve seen, I couldn’t continue staying at home, knowing that animals are suffering. When we are with friends, they remain in factory farms. When we are at the cinema, or at a restaurant, they remain in slaughterhouses. They never have a break. So, why should I be silent?”

Avalon Llewellyn is a 17-year-old vegan activist and mental health advocate. Llewellyn became involved in animal activism as a child, learning about the lives of animals in the food and clothing industries, and at 13 she went vegan. In the years since, she has inspired countless others to do the same, using social media as her main tool for reaching and engaging with other young people. She organises meet-ups where groups of young people can connect with peers, explore shared values, and discuss animal rights issues, and provides mentoring by email to those wanting to learn more about or try veganism.

At just 15, Llewellyn published an e-book titled “The Modern Guide to Going Vegan at a Young Age” (full disclosure: she donates a percentage of proceeds to We Animals!).

Avalon Theisen is the 17-year-old animal activist and conservationist behind the non-profit organisation Conserve It Forward, which she founded at just nine years old. Based in Florida, Conserve It Forward runs educational programs on subjects including amphibian conservation, animal advocacy, sustainable eating and peacemaking. The group promotes education and action that benefits the natural world, humans, and non-human animals. The connection between the food we consume and the damage we cause to the environment continues to drive Theisen’s work. In the years since founding the organization, she has given a TEDx Talk on her journey in conservation, attended the 2015 COP 21 climate change conference in Paris to speak about environmental issues, and has visited the White House to discuss how our food choices affect the environment.

“Children and teenagers may think that because of their age, they cannot help or that what they can do now is not impactful. I don’t agree. Youth make up a large proportion of the population, and so even if our acts our small, each action adds up to a lot of positive change. Young people’s voices are important because they show that we can all make a positive difference!”

Sixteen-year-old Lila Copeland is the force behind Earth Peace Foundation, a California-based non-profit focussed on bringing humane education about the animal welfare, environmental, and human health impacts of animal agriculture into schools and clubs for young people. The foundation also petitions government agencies for legislative and policy change to protect animals. In 2015, Earth Peace Foundation launched the Healthy Freedom campaign, with the aim of bringing vegan meals into all California public schools every day of the school year. So far, Earth Peace has been successful in petitioning the Board of Education to pass a resolution that mandates vegan meals in the Los Angeles Unified School District, California’s largest district by number of enrolled students.

“Kids literally are the future. If we can get in at school age and educate them about what animal agriculture is doing to animals, the planet, and human health, kids will make the right choices. I know they will.”

Genesis Butler is the 11-year-old animal activist behind Genesis for Animals, a non-profit organisation that raises funds for animal sanctuaries around the world. After visiting animal sanctuaries and seeing how much time and money was required to care for the animals – and that most sanctuaries were struggling to meet their costs – Butler decided she wanted to help.

Butler is already a sought-after speaker, regularly speaking at animal rights events across the United States and in Canada, sharing her story of activism and compassion. She is one of the world’s youngest TEDx speakers, and has won numerous awards for her advocacy.

“Advocating for the animals is so important because the animals need our voices. Animals aren’t voiceless, it’s just that people don’t listen to them, so it’s important to speak up for them so they will never be silenced.”