Bringing the world together to bear witness 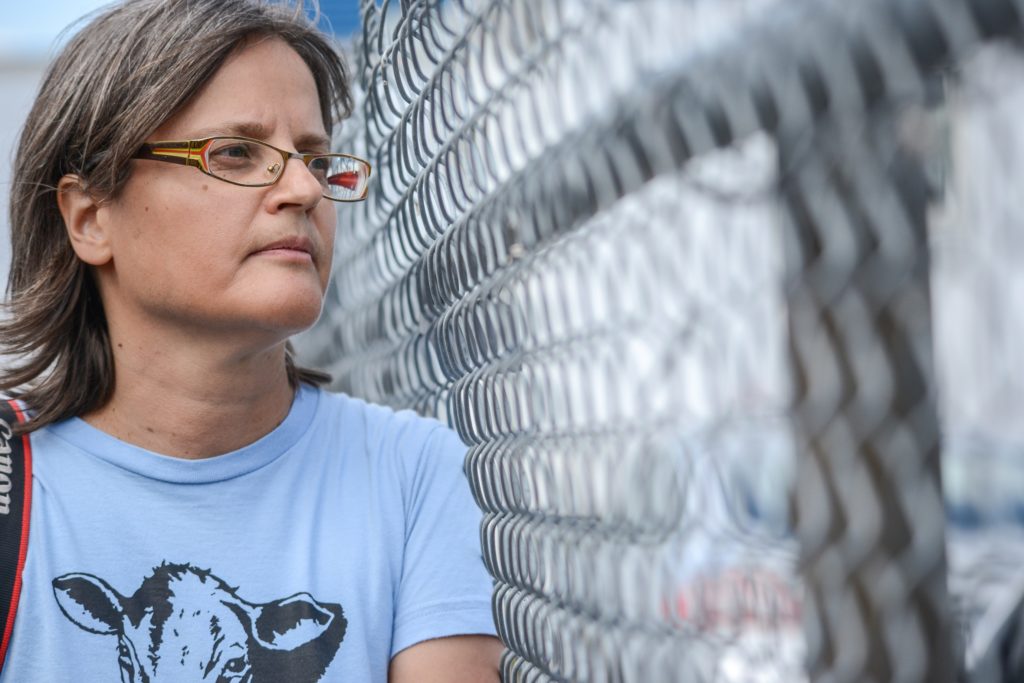 To get Anita Krajnc to talk about herself can be a challenge. The Toronto-based activist and founder of the now-global Animal Save Movement (formally called The Save Movement), would much prefer to quote Tolstoy, Gandhi, or Mark and Paul Engler, than talk of her own achievements in animal advocacy. She’s no martyr, just modest, and much more focused on the ethics and fundamentals of animal rights, and the inner working of society and social justice movements. And when it comes to the creation of the Animal Save Movement, which now spans about 900 chapters, branching beyond Animal Save into Climate Save and Health Save factions, Krajnc, no surprise, gives much of the credit to her dog.

Anita Krajnc holding a sign during a Toronto Pig Save vigil. Canada, 2013.

Long before creating the first Save chapter, Toronto Pig Save, Krajnc says it was during her time as an undergraduate at the University of Toronto (U of T) in the early nineties, when she first became involved in animal activism. “I saw this poster for The Animals Film,” she says, a 1981 documentary about the use of animals by humans. She watched it with about twenty other people in a basement library at U of T, she says “and I couldn’t believe it. I had nightmares for three days. Then I became a vegetarian, and then an activist.” She soon became president of Students for the Ethical Treatment of Animals, and collected data about the number of animals being used at U of T, “which was about fifty thousand vertebrates, a lot of animals,” she says, to provide to media and the ombudsperson. “That was one of the first campaigns I worked on.”

Krajnc then began working in academia, including at Queens University in 2006, where she eventually went vegan after watching the 2000 documentary The Witness, and started investigating the veal industry. “I actually didn’t know the veal industry was connected to dairy,” she says.

She then organized screenings at Queens, of the 2004 documentary Peaceable Kingdom, about farmers who refused to kill their animals, and she incorporated animal rights into each course she taught. “Every course! So in Intro to Canadian Politics, for example, I would have a week on social movements and a case study was the animal rights movement.”

At that point she says animal rights had permeated everything she did.

Actor Joaquin Phoenix joins Anita Krajnc and Animal Save Movement activists in Toronto for a tour of the Be Fair Be Vegan subway ad campaign. Canada, 2019.

Slaughterhouse employees force Anita Krajnc away from the gates. Canada, 2015.

This all-encompassing passion is what led Krajnc down the path that would land her, in 2006, face to face with the pigs who would change everything.

“Before bearing witness I was an activist, but it never occurred to me to go up to the slaughterhouse and look at the pigs,” she says. Though she could actually see the former Quality Meat Packers slaughterhouse on Lakeshore, from the streetcar on Bathurst, she says she never went to check it out. “It just never occurred to me to walk there,” she says. “But in 2010, when we adopted Mr. Bean, the dog, [whom is now named co-founder of the Animal Save Movement], I would walk him every morning there, and that’s when we saw the trucks.” Krajnc says she finds it interesting that the origin story of the Animal Save Movement begins with an animal. “One hundred percent if I had not adopted Mr. Bean, I wouldn’t have done it [created the group].” And what Mr. Bean led her to that day, were pigs, looking at her, she says, “out of the portholes, and I couldn’t believe it. I couldn’t believe how beautiful the pigs were, how scared they were, and how unjust it was.”

She calls the moment an epiphany. “I had had a prejudice, or misconception,” she says.

“I thought all pigs were the same, but they aren’t, once you come close to them and look at them. And that’s true for any animal; they’re all individuals. And one day I saw seven or eight trucks and I said, ‘That’s it, we’re gonna start a group.’”

Inspired by the altruistic work of Tolstoy and Ghandi, whom she was studying at the time, Krajnc says she felt compelled to take action. “I thought, I’m just an ordinary person, but if they took the time out and organized in their own communities, then I must.”

And what Krajnc felt she must do – after a few months of figuring out their strategy, doing fundraisers and art shows and investigations– was to bear witness. She quotes Tolstoy:

“’When the suffering of another creature causes you to feel pain, do not submit to the initial desire to flee from the suffering one, but on the contrary, come closer, as close as you can to he who suffers, and try to help.’ That’s where we got the definition of bearing witness. You have a choice: you can flee, or you can come close and try to help.”

Krajnc says bearing witness of animals on transport trucks headed into slaughter is “an aha moment, it really changes you.” And once she experienced it herself, she knew it was something the rest of the world had to see. “Everyone needs to be face to face, to touch the animal,” she says. “Everyone needs to do this. Because if they see this they wouldn’t participate in evil.”

Anita Krajnc with supporters, after the court case against her for giving water to thirsty pigs in transport. Canada, 2015.

Anita Krajnc, after the court case against her for giving water to thirsty pigs in transport. Canada, 2015.

Krajnc brought perhaps the most attention to the growing Animal Save Movement in 2015, when she was arrested for providing water to a thirsty pig on a hot truck. What would later be dubbed #PigTrial made international headlines, sparking debates and commentary never considered before. The charges were dismissed in 2017, in the precedent-setting case that would set the tone for subsequent dismissed cases against animal activists in Canada and the United States.

Thirsty pig on transport truck is given water by Melbourne Pig Save activist. Australia, 2017.

The name Toronto Pig Save originally came out of a conversation between Krajnc and her best friend, as they sought something inviting, something others would want to join. “It’s such a great name, so positive,” she says, ‘Save,’ it’s such a beautiful word.” And it turned out, she says, to be a good name “to adapt for all different cities.” And adapt they did, to now not only including about 770 different chapters around the world focusing on a variety of animal species, but further branching into Climate Save and Health Save movements.

Anita Krajnc with a rescued cow at Farm Sanctuary. USA, 2013.

Pig Save photographs and posters are hung on a chain link fence visible from the street. Canada 2013.

For Krajnc, however, this is still not enough.

Today, Krajnc believes Greta Thunberg is the most important person on earth, and she is working with climate activist group Extinction Rebellion, engaging in acts of civil disobedience.

And thus, the seasoned activist, academic and philosopher continues to witness, to disrupt, and to inspire others to change — for animals, people, and the planet.

Photos by Jo-Anne McArthur. Interview and story by Jessica Scott-Reid.

Narrated by Anita Krajnc, this short film from We Animals Media tells the story of bearing witness and animal advocacy at slaughterhouses in Toronto during a 24-hour vigil in 2015, wherein amidst the horror, a small miracle took place.