On a Mission of Kindness and Compassion Towards All Animals 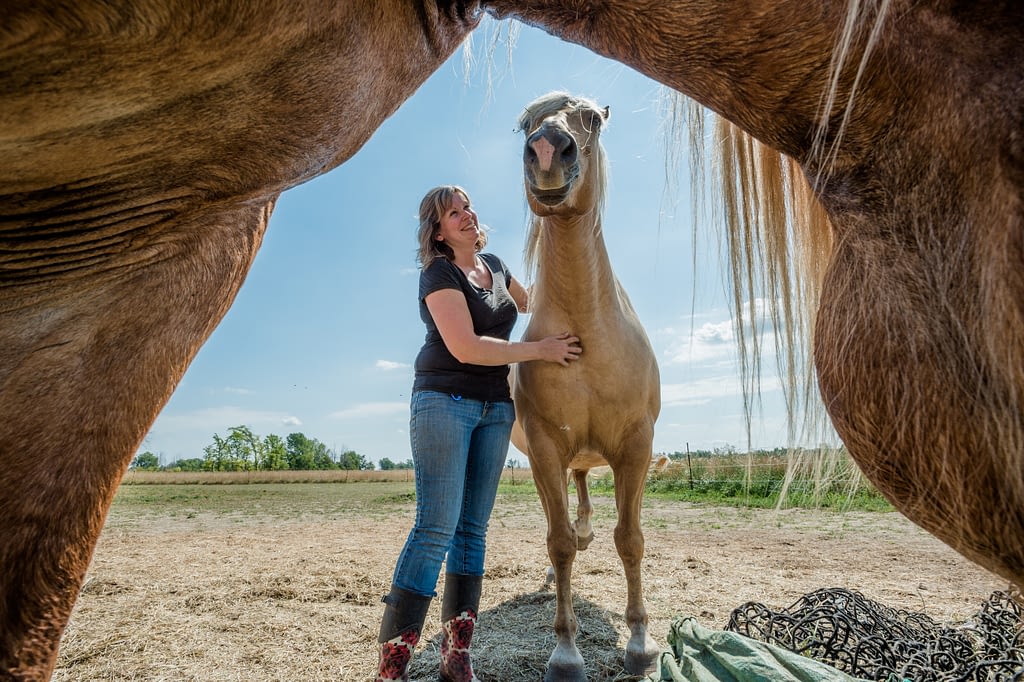 Karyn Boswell with Penny and Teddy.

Karyn Boswell didn’t set out to become a leading voice on horse protection. She didn’t even set out to start a horse sanctuary, Penny Lane Farm Sanctuary. Instead, the former federal government analyst became a mother and moved to the country—coincidentally, just down the road from a feedlot, where horses no longer of use in human industries were routinely held between auction and slaughter.

A lifelong vegetarian (she’s now vegan) and one-time veterinary clinic employee, Karyn hadn’t even known that horses were killed for meat, let alone that approximately 80,000 horses endure a horrifying slaughter each year in Canada. The first horse she rescued and the namesake for her sanctuary, Penny Lane, was found with an auction number glued to her hip. Then, Penny didn’t have a name, and her past was unknown—irrelevant to her owner, who bought her at auction only to turn a profit by selling her for meat.

We met Karyn, her family and her team of dedicated volunteers on a hot summer’s day at Penny Lane, just east of Canada’s capital, Ottawa. Karyn introduced us to each resident, sharing with us their harrowing stories, and how they’ve adjusted to sanctuary life. It was brilliant to photograph her interacting with Penny and Teddy in the lower paddock. Her look of unbridled (pun!) happiness while spending time with her equine friends was a joy to photograph.

Nobody rides on the horses at Karyn’s sanctuary. She says:

It’s important to me that nobody rides any of the horses at Penny Lane because they are not here to serve a purpose or to entertain—they are simply allowed to live their own lives, free to just be. All of the horses have had tough pasts, full of instability and uncertainty. Cowboy, for instance, was severely tortured and abused. He was in vet care for months and was then put up for adoption by the Windsor Humane Society. Sadly, no one wanted him because he could not be ridden—he was regarded as “useless”. He is not a toy that can be tossed aside when no longer useful. I want him to know he never has to entertain anyone. He can live in peace at the sanctuary, protected for life. I think it’s important to show people that you can establish an amazing relationship with a horse built on trust without riding them.

It’s not just 12 horses who are lucky enough to call Penny Lane home. Two goats rescued by the Montreal SPCA from a situation of severe neglect and two turkeys once destined to be Thanksgiving dinner now form their own unlikely flock of four. The turkeys, Michelle and Belle, are curious, intelligent, and alert. Though shy at first, it didn’t take them long to warm up to their human companions—or become bonded to each other. Now, they serve as ambassadors for sanctuary visitors, gently reminding people that turkeys are individuals, not a fleeting meal.

Karyn Boswell with her family and some of the staff and volunteers at Penny Lane Sanctuary.

After meeting Karyn, we got the sense that she was a supporter of many sanctuaries, animal rescue efforts and outreach. When asked about this, she replied:

A large part of my mission with Penny Lane Farm Sanctuary is to promote kindness and compassion towards all animals in order to raise awareness. I believe it is very important to support other organizations and efforts involved in animal rights that are working hard  to make a difference – whether it be in the form of a sanctuary or vegan-based business.  Being involved so deeply with the horses has truly opened my eyes to just how badly society mistreats and misunderstands them. They are still classified as “livestock”, which subjects them to the same horrific abuses that farm animals endure. I have made a point of digging into specific industries which rely on horses for pure monetary gain (discarding them like trash when no longer profitable). Some examples include the racing industry, slaughter industry (and live export of draft horses to Japan for meat consumption), caleche industry, and PMU farms out West. I support the tireless efforts of organizations such as the Canadian Horse Defense Coalition and the Anti-Caleche Defense Coalition, that work hard to bring these issues to light.

Karyn and her team open their doors to visitors a few times a year. Details are on their website: www.pennylanesanctuary.com

Thank you Karyn from everyone at Unbound for your tireless and inspiring work on behalf of animals.