Rescuing Hens From the Brink of Death 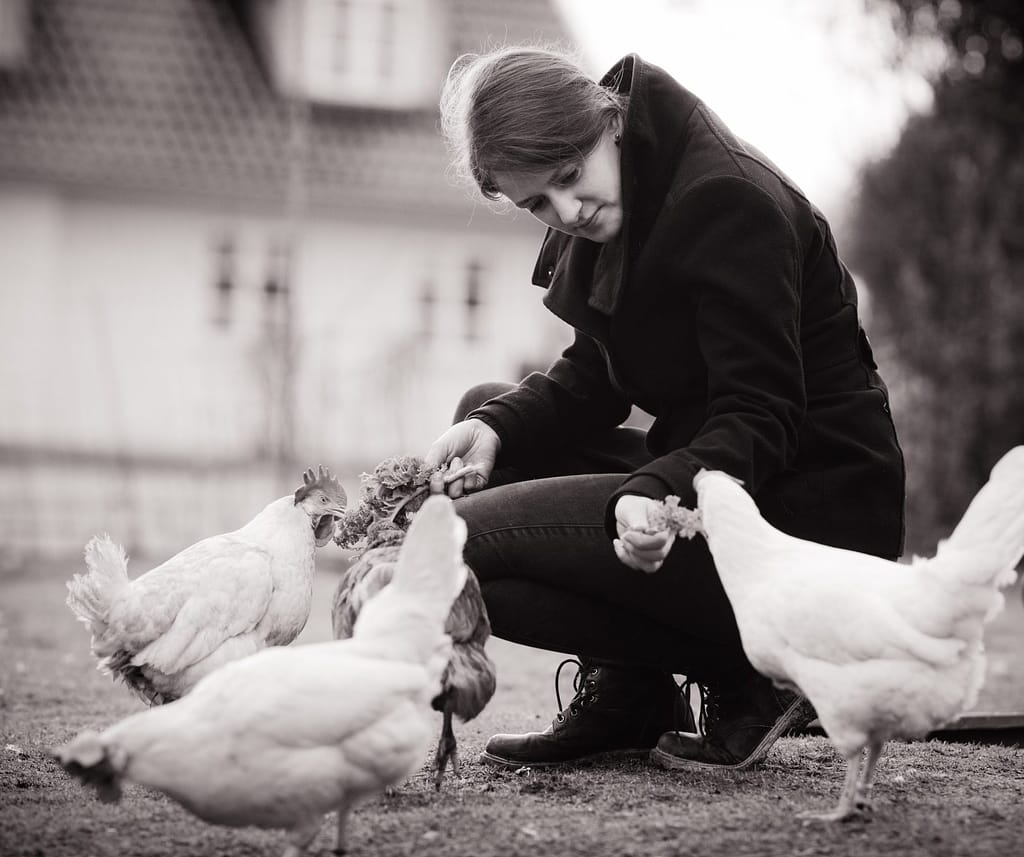 Lina Lind Christensen runs Frie Vinger, a sanctuary for rescued farmed animals in Denmark. She also works with Anima, the largest animal rights organization in that country. Her rescue work is featured in “The Machine,” a powerful new short film produced for The Unbound Project by Jan Sorgenfrei.

UP: Can you tell us about your work with Anima?

LLC: I am a campaign manager with Anima. This means that I am responsible for campaigns educating people about things like egg production. I also do a lot of outreach work with companies, trying to get them to stop using eggs from battery hens.

UP: How did you get involved in this kind of work?

LLC: My interest in helping animals dates back a long time. I have always been interested in animal welfare, even when I was kid. Eventually I ordered some flyers from groups like PETA and, funnily, from Anima, where I now work. I handed out these flyers because I wanted to educate people about how animals were being treated. I became vegetarian 7 years ago after I saw online video footage from slaughterhouse with cows standing in line waiting to die. I found the video to be so powerful – we can see clearly that the cow or bull is scared and trying to get away because she/he understands what is happening up ahead. This made me think about the moral status of animals – should we be killing them at all?

My move to veganism was in “baby steps,” and I kept removing one product and then another. When my husband and I bought our current house we were so happy that it had a garden. We knew about the British Hen Welfare Trust and I asked my husband if we could take in a few hens now that we had a garden they could live in. I had always loved birds, so this seemed to make sense to me. I looked in to organizations in Denmark, to see if there was something like the British Hen Welfare Trust here. There wasn’t, so we decided to start rescuing hens directly on our own. I started calling around to farmers to ask if I could have some of the hens they didn’t want anymore. One of them laughed at me and said “why would you want some of my trash?”

I finished my Master’s degree in Philosophy in 2015 and I had been planning to go on to do a PhD in animal ethics, but I changed my mind — I decided that instead of doing academic work I wanted to focus on rescuing animals. I have a huge amount of respect for people who work in ethics, but I personally felt that for me I needed to have a lot of direct contact with the animals and I find that motivating.

UP: Can you tell us about your first rescue?

LLC: One farmer said he was getting rid of hens in a week, and that it would be ok if I went and took some of them. So, we drove to Jutland, 1 ½ hours away. It was a medium sized farm that had about 50,000 hens. When we arrived, nobody was there – I walked around exploring because I had never seen such a place before. I called the farmer once we arrived and he said he was running late, that he would be about 10 mins. While I waited for him, I looked around some more. I opened a door to a barn, and looked inside and this was a profound moment for me. I had heard about how egg production was organized, but I had never seen it with my own eyes.

I opened the door and immediately saw on the other side of the door, a hen who had fallen out of a cage. She was a little brown hen who had barely any feathers. She was obviously scared and never seen the sun before. It was a beautiful sunny day, the 1st of June – the sun was shining, but here was this little hen just inside the door who had never seen sunshine. I will never forget this moment. I called for my husband to come and see this hen, but when I turned back she was gone. I didn’t get to help her, although I looked for her. It was so dark in the barn, such a contrast from the beautiful sunny day outside. I looked and looked for this little hen, but I could not find her.

I knew that this sort of production existed in Denmark, but I guess I believed that this country was better than other places. I believe many people tell themselves that.

When the farmer arrived he told us to take the 6 hens we came for from the cages, but then before we could he went and did it himself. He brought them out hanging by their legs and roughly tossed them in the crate we had brought with us. He smiled and seemed like he wanted to laugh. He seemed to think we were idiots and said something like “good luck with them. I hope you can get some more eggs out of them.” That was our first rescue, and we have been back to that farm one time since – we managed to rescue 3 more hens the next time.

UP: How did your sanctuary get started?

LLC: After that first rescue of 6 hens we made a Facebook page for our sanctuary and that is when things really started up. At first we had only family and friends following us, maybe a few hen lovers. But as it grew we were contacted by people who wanted to adopt the hens, so we started doing more and more rescues.

UP: What is a typical day like for you?

LLC: I get up at 6am to look after the hens – I turn on the lights so that they can eat, and then I let them out into the garden. As layer hens, they are very susceptible to diseases, so I check each one individually each morning. I also clean the hen house each day. I spend a lot of time talking to the hens, and when I used to study I would sit in the hen house with them while I read! I also do a lot of “customer service” and I deal with potential adopters. I also spend time doing social media and outreach, and then it is time to go back to the hens again! In the winter bed time for the birds comes earlier because it gets darker earlier. In summer the birds stay up later, but there is always a lot of work to do! I have a “desk job” at Anima and now that I’m spending so much time in front of a computer I realize just how much time I used to spend with the hens when I was a student and at home more!

UP: Do people recognize you in Denmark, because it is such a small country? Do you think that it is harder or easier to have a Farm Sanctuary in Denmark because of its size?

LLC: I think there is a need for farm sanctuaries in Denmark. There are a lot of people who want to visit, connect, and volunteer too! This is good for the animals AND for the humans who want to see rescue and beauty and kindness. I am able to do what I do because I have the hens –people can see them, be with them, and connect with them. This is important.

In the beginning few people recognized me and that made it easier to go to different places for rescues. We weren’t really on social media, so it was easy to do what we had to do. Now there is a lot more attention on Frie Vinger and on the work I’m doing. I know that one of the farmers I rescue hens from knows for sure what I’m doing, but I don’t think he minds. There was one time I was at his farm, packing hens into the cages. One had fallen from the machine they use to kill the spent hens, a “chick grinder” which gases and grinds them up. This hen had a broken wing and I ran to pick her up. The farmer said “it is probably best that hen goes with you,” as if he was happy that she would get a second chance. Most farmers seem desensitized, and normally they laugh at me and the work I am doing — they think I’m foolish to be spending so much money on vet bills, etc., but not this time.

UP: How do you financially support Frie Vinger?

LLC: It is hard to find donors to help out in Denmark as it is not a very big population. In the beginning things were really tough — my husband and I paid for everything ourselves and we totally underestimated the cost! We did one rescue of 200 hens and it was really expensive! The cost of renting trucks and crates as well as the vet bills really adds up. We spent thousands of our own Euros on the rescue, and at that point I was still a student so we really couldn’t afford it.

Since then we have focused on doing smaller rescues, but we saw that the project had a future and we began asking for a bit more money from the people who adopt the hens from us. Now when people want to adopt they have to apply and they pay a fee. Not only does this help raise money for the rescue work, it helps to weed out people who want the hens for slaughter!

Now Anima helps a lot with fundraising and extra expenses. We have multimedia and videos that have helped to spread the word about our work and this has helped a lot, it has generated donations. In November 2015 we got our first monthly donor! We are going to start a virtual “adopt a hen” program that will also help support the work we do.

UP: What do you want so say to the world about animals?

LCC: I want more than anything for people to understand that animals are individuals. I want to give them their individuality back and, of course, I want to save them all too!