“It’s simply a cruel, shameful chapter of our country that belongs in the dark ages.” 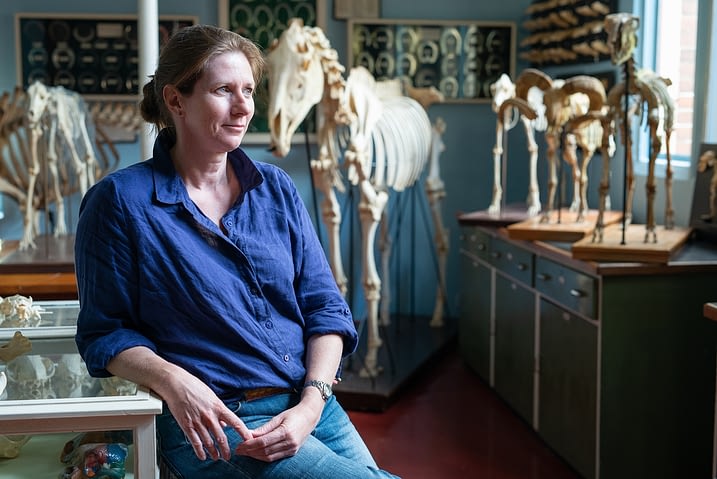 All images of Lynn Simpson were taken by Jo-Anne McArthur at the University of Sydney’s veterinary school.

Each ship carries up to 20,000 cows or 100,000 sheep for weeks at a time over vast seas, only to be slaughtered once they reach their destinations.

It is an industry that has frequently been in the media spotlight for shocking animal cruelty – in recent weeks to the point of public cries for the entire industry to be ended for good. Simpson is one of very few women to have seen the harsh realities of this trade first hand.

Simpson decided to become a veterinarian at the age of six, when she first discovered that being an animal doctor was a profession. In her third year of vet school she got a job on the wharf in Fremantle loading livestock onto ships. Simpson remembers seeing dead and injured animals being dragged off the trucks that had come from the farms. It was here that she first realised something was wrong, that these animals were suffering.

It was clear to all that what we were involved with was wrong, however, at least we were bearing witness and taking complaints back to shore to push for reform.

Within three weeks of graduating, she took her first live export voyage on a ship bound for Saudi Arabia. Over the next ten years she would work on 57 voyages. It was an exciting career full of adventure, which saw her sailing through environmental disasters, war zones, and pirated waters.

Because of the sheer number of animals she looked after, and the severity of their suffering, her work seemed larger than life. It was also chaotic, filthy, and brutal. On board, the overcrowded animals suffered heat stress, suffocation, starvation, and thirst, so tightly packed they were often unable to easily reach water as they were shipped into the heart of Middle Eastern summer. Lying down meant they were likely to be trampled by the other desperate animals beside them. Mother cows and sheep suffered miscarriages or stillbirths; still more had their babies crushed to death under the sea of hooves. Simpson describes the animals on one voyage as actually having melted, “cooking from the inside.” She spent her days seeing to their injuries, doing what she could to relieve their suffering, and euthanizing those she could not help.

What kept her going on those harsh journeys? “Black humour,” she says, “and wine.” Knowing she was providing a meaningful service to the animals by trying to reduce their suffering also gave her a sense of purpose. “It was clear to all that what we were involved with was wrong, however, at least we were bearing witness and taking complaints back to shore to push for reform.”

Over the years Simpson made countless reports to the Government detailing the bloody reality of life aboard the ships, but her concerns for the welfare of the animals went ignored. Only the number of deaths was recorded.

Like many ‘whistle-blowers’ I was simply doing my job, reporting to authorities and working to improve welfare.

Then, Simpson was offered the opportunity to make a lasting difference to the welfare of animals in the live export industry. In 2012 she was offered a job as a technical advisor with the Department of Agriculture, the live-export industry regulator, while it carried out a review of the Australian Standards for Exporting Livestock.

The report she submitted exposed the cruelty and suffering at the heart of the live export trade. Her evidence, including graphic photographs, was an unprecedented body of work documenting the horrors routinely occurring on board. Simpson felt she was making a powerful case for reform of the industry – she was finally being heard.

When the evidence was accidentally leaked to the public in 2013, it was explosive, blowing apart claims by the industry that animal welfare was a top priority. It also ended Simpson’s career. She was gradually dismissed from her position under pressure from live exporters, revealing undue influence of industry within government. She was ostracized by her colleagues and blacklisted by the industry. “It was a very lonely and frustrating time,” she says. “Like many ‘whistle-blowers’ I was simply doing my job, reporting to authorities and working to improve welfare.”

Since her dismissal, Simpson has been unable to work in the industry to which she gave ten years of her life. But there was a silver lining: “I could then strategize to speak up loudly and raise awareness, knowing I had nothing to lose.”

Simpson’s vast experience within the industry has given her advocacy a credibility that other whistle-blowers don’t have. Where many have been discredited as ill-informed, Simpson has years’ worth of hard evidence behind her. Her voice holds weight.

Simpson has left a powerful legacy in the fight to end live export, both from within the industry and from the outside. In the years since her explosive dismissal, her story has paved the way for more whistleblowers to come forward, keeping the issue in the public eye.

“It’s simply a cruel, shameful chapter of our country that belongs in the dark ages.” she says with absolute conviction.

To follow the story about live transport in Australia, visit Animals Australia.
Photos by Jo-Anne McArthur. Interview and text by Anna Mackiewicz.