“When you untie the knots, you have to do it bit by bit.” 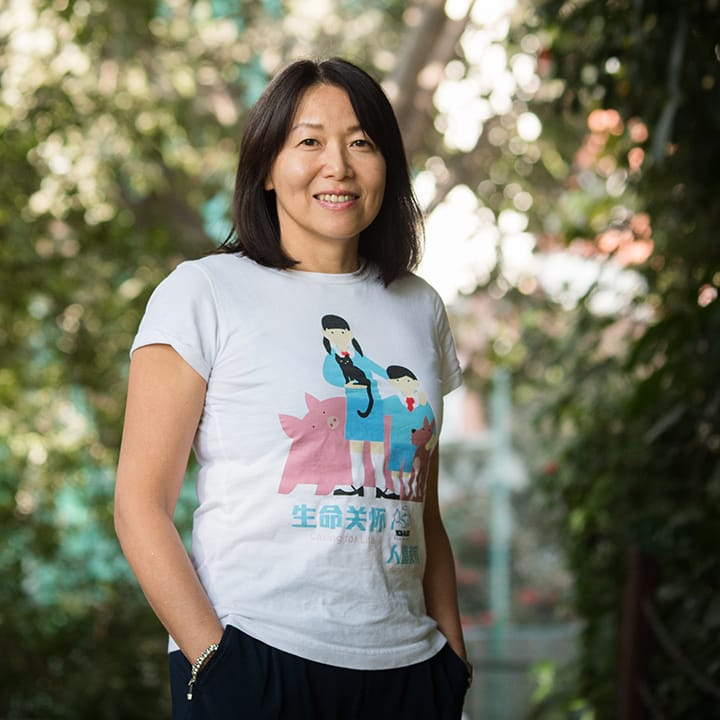 Pei-Feng Su. All photographs by Jo-Anne McArthur (except where indicated).

P ei-Feng Su gets a call from a donor who presents her with an opportunity: the donor wants to fund her organization to rescue a truck full of dogs bound for slaughter. She says no.

“It’s a choice. We live with the choice.”

Su is the Executive Director and co-founder of ACT Asia, an organization dedicated to humane education in Asia. Since it was founded, the organization has taught more than 65,000 students and trained over 1000 teachers. They’re a small group with limited funding, but they punch above their weight, in part because of their laser focus. Donors want to fund rescuing dogs from meat trucks, and it’s gratifying work in the short term, but finding funding for what comes next – sheltering and caring for the animals – would quickly take up all of ACT Asia’s time and resources.

Because her group’s focus is in education, people say to her, “Oh you just chose the easy job. You don’t have the courage to fight.” She used to agree with them.

“We’re just firefighting,” she says of many of the campaigns that exist today. She acknowledges the importance of the animal movement’s current campaigns – for stronger legislation, corporate shifts, and moving people to plant-based diets – but, she argues, we need a holistic approach, and educating young people has been woefully neglected by the animal movement.

Su wasn’t drawn into the animal movement by any particular feeling of love towards other species, but because she recognized it as a social justice issue like any other. Before working on behalf of animals, she was an advocate for victims of domestic violence and women seeking access to abortion.

In 1992, when Su first started fighting for animals, she would go to meetings in parliament and speak to the media. But, with no PhD, no science degree, and no background in the issues, she quickly felt intimidated, especially as a woman.

In compassionate work, there are always lots of women, but even when I was working in the west, the men earned more.

So, she left the country to learn practical skills, interning with several animal rights organizations in the US.

“I wanted to learn how they survived,” Su says of women in the movement. “And I was empowered.

“In compassionate work, there are always lots of women,” but they don’t always receive respect, she goes on. “Even when I was working in the west, the men earned more.” Su almost took an organization to court because she knew that a man hired after her, and with the same experience, was being paid more.

On gender equality, she says looking back on her 25 years of experience, “It’s better, but it’s not there yet.”

When you untie the knots, you have to do it bit by bit.

Ten years ago, Su conceived the idea for an education-focused organization and, unknowingly, became pregnant at the same time. “I always say I have two kids,” she laughs. Twins, born and raised together.

Su credits her daughter with making her the activist she is today. “I think if I didn’t have my daughter I would have already left the movement. I really think she saved me.”

Participants in the #CaringForLife Education program. Image courtesy of ActAsia.

She works hard to prove that she can be a good mother and a good activist and, with the support of her husband, she’s taken motherhood in stride. “I sent my last email to everyone when I was on the way to the hospital.”

Her daughter has taught her the importance of a normal, balanced life, Su says. “When I became an activist, for the first five years, I had no friends, because I could not bear to go out with them. I think everybody goes through it.”

Raising a child has also reinforced her conviction in what she does. “She’s my best teacher,” Su says of her daughter, Risa. “She really helped me to understand and to see the world as kids do. That’s why I’m so passionate about education,” she says, reflecting on the power of teaching a young child. “They are what you make them.”

Su is playing the long game. “When you untie the knots, you have to do it bit by bit.” When she first started, Su thought ACT Asia might end up teaching humane education in a few schools. Today, they have six years’ worth of curriculum being taught in 130 schools, with more being rolled out all the time.

“We’re not going to break that circle if they grow up seeing abuse. We have more kids in schools now saying, ‘I don’t want to see the circus, mom, because I think that’s wrong.’”

ACT Asia’s work has made them one of the most impactful groups in Asia and a global force in humane education, with several offices now open around the world. Su hasn’t chosen an easy route, but she’s already had a lasting impact for animals.