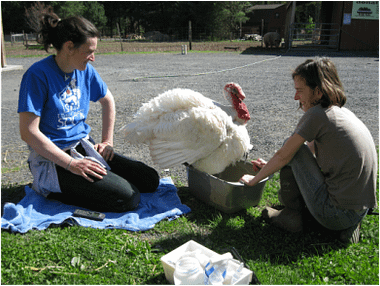 One only need glance around at any protest, meeting, or conference to note that there is a preponderance of women shaping and driving animal advocacy.  Frankly, in any social justice cause it is most often women who volunteer to create and distribute fliers, prepare posters and food for meetings and events, make necessary phone calls, and draft required letters.  Women offer creative solutions to problems of justice, foster community among activists, and show the way forward in difficult situations. Whether preparing posters or standing up to corporations, women form the front lines of social justice advocacy, including animal liberation. But when we look to who is holding the megaphone, chairing the meeting, or speaking at the podium, it is usually men. Why is this the case given that women have formed and continue to form the foundation and backbone of animal advocacy?  The vital contributions of women in social justice advocacy generally, and animal liberation specifically, deserve more recognition.

In patriarchal societies, which exist across Europe, Africa, Asia, and the Americas, women have traditionally been viewed as a support system for men, not as agents in their own right. In such cultures women have traditionally been (and in many places still are) property of their husbands legally, and are often confined to the home where they are exploited for labor:   They are expected to tend homes, cook, and provide both offspring and child care.  In exchange, “breadwinners” (men who hold the wealth) provide a home and food.  Women who fail to perform expected duties are at risk of being abused, cast out, or even killed.

As breadwinners, men often feel entitled to exploit women in the home and dispose of them as they please. In particular, women have been exploited for reproduction—for intercourse-on-demand and resultant offspring.  Traditionally, men desire sons to work alongside and inherit wealth, and women who have failed to produce sons—or who fail to produce children—have been at risk of being cast out or traded-in for a woman who is able to perform these services.  Women are comparatively powerless in relation to men—devalued, at risk of abuse, insecure in their homes and their communities.

Like women, anymals (any animal other than my own species) are expected to provide labor and offspring in exchange for upkeep.  Those who do not fulfill this expectation are at risk of abuse and/or being killed or cast out.  Those who are in power feel entitled to exploit donkeys, ponies, dogs, or elephants and to dispose of them as they please if they do not perform as expected or desired.

Animal activists, when working for change on behalf of farmed animals, target extreme confinement of farrowing, gestation, and veal crates, as well as battery cages. What is the common denominator of these practices?  These extremely cruel forms of confinement only affect female farmed animals—cows, hens, and sows.  These unfortunate individuals suffer the longest and the most severely because they are females—because they are exploited for their reproductive powers.  Female farmed animals are violated, forced into pregnancy, forced to birth, forced into a motherhood they never experience because their young are snatched from them at birth or shortly thereafter.  Because they are females, cows, hens, and sows not only suffer the worst industry practices, but they also suffer for the longest time period.*

Exploiting and abusing women and farmed animals are both injustices of the powerful over the disempowered—stemming from the same selfish source, they are manifest in similar ways.  Consequently, if we are to bring change, those who work on behalf of anymals must also work on behalf of women, and those who hope to free women must also work to free anymals. Injustices stemming from the powerful against the disempowered also fuel racism, heterosexism, ageism, cissexism, and ableism.  Consequently, it makes no sense to fight one form of oppression while fueling another.  Sexism is speciesism is racism.

We can only further the cause of equality and peaceful co-existence if we start with ourselves.  We must each own and let go of power, privilege, and forms of exploitation over others, whether farmed animals, women, people of color, the aged, and so on. Because the source of the problem is the same—selfish exploitation of the disempowered by the powerful—the solution is the same: Foster and exemplify an equality and respect for all of humanity and for all living beings that disallows marginalization and exploitation. This requires that women—especially minorities—be recognized for their contributions to social justice activism, including animal advocacy, and that men move away from the microphones, megaphones, and podiums so that the full potential of women can be realized on behalf of anymals around the world.

Lisa Kemmerer, professor of philosophy and religions at Montana State University Billings, is a philosopher-activist working on behalf of nonhuman animals, the environment, and disempowered human beings. Graduate of Reed, Harvard, and Glasgow University (Scotland), Kemmerer has written/edited nine books , including Eating Earth: Dietary choice and Environmental Health, Animals and World Religions, Animals and the Environment: Advocacy, Activism, and the Quest for Common Ground, and Sister Species: Women, Animals, and Social Justice.  You can learn more about her work at lisakemmerer.com.

← Women, Animals, & the Future of Work What My Rescue Dog Taught Me About Love, Motherhood, and Serenity →