What My Rescue Dog Taught Me About Love, Motherhood, and Serenity 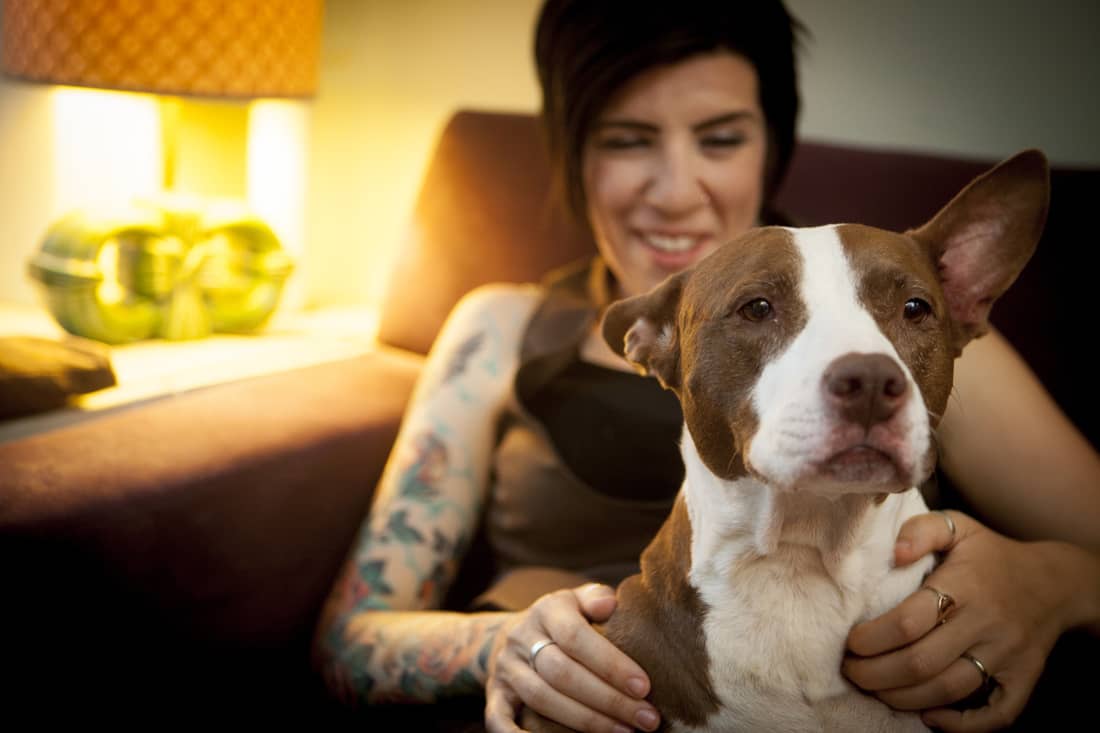 If I had a dirty diaper for every time I was told that motherhood defines being a woman, and defines love, I’d be living in a shit storm. (Thankfully, I haven’t been counting the mentions.) Call me radical, but I am a woman who chose not to have children, yet I am indeed full of love, and I hereby object to that theory.

I was four years old when my mother and I got locked in a vestibule that connected two buildings in a nearby community college, where, on Sundays, I took ballet. My memory of this is obviously hazy, but I do clearly recall two things: 1. I was wearing my favorite tutu (the shiny purple one that was extra ruffley); and 2. Even though, on one hand, I was scared, on the other I was ecstatic to have my mom all to myself. (Take that, big brother.) Given the fact that it is now thirty-two years later and I am writing this, you can see that we did, in fact, eventually get out.

When I was a little girl growing up in suburban New Jersey, man-oh-man was I obsessed with my mom. The unconditional love that my mother showered back on me is something that helped shape me, a warm-fuzzy quality that I like to think I bring to my various relationships these days – with my wife, with my friends, with my dog. Just like Mom, I’m doting and devoted. And even though I chose not to have children, the values of goodness and kindness that she helped instill are, I hope, as embedded in my days as my morning coffee. They wake me up. I need them.

Yet every time someone says that “you don’t know real love until you’ve been a mother,” I feel my ovaries begin to boil. Though I don’t doubt for a second the overwhelming love that (most) mothers feel when they gaze at their baby — and I think I’m safe in assuming there might even be a chemical reaction going on making that love even bigger and better — as a person who chose not to have children, there is one thing I don’t lack in life, and that’s love.

My Dog, the Mother

As I am writing this, my twelve-year-old rescued pit bull, Rose, is sitting on the bed looking at me, her paws nestled close on each side of her face, her brow alternately lifting – left then right, left then right. It’s so cute I can hardly stand it. In a moment, when she says so, I will need to help her get down the stairs, because she’s shaped a bit like a fireplug, and she doesn’t bend in the middle. Plus, she’s elderly, and sometimes needs a hand with things I took for granted when she was younger and could jump as high as my shoulders.

Rose and I love each other. A lot. Of that I have no question. Given our connection, you can imagine that even though I try to ignore it, there are moments every day when my mind lingers for a second too long on Rose’s early days: Being found tied to a tree in Washington, D.C., where she had been left for several days… Being taken to a “shelter,” where they killed all pit bulls… Sufficiently wooing the friendly, brave employees there, who had formed an underground railroad of sorts, sneaking out the lucky few dogs who had, for some reason, won their “let’s live!” lotto.

Years ago, I got out of that vestibule and made it to my ballet class nearly on time. Not as many years ago, Rose the Dog got out of hell, and managed to find a place in our heart and home.

She was one year old when she was rescued, and her teats hung down low – she had just weaned puppies. Though we’ll never know what had come before that, we suspect that Rose might have been used as a breeding dog. Her reproductive capacities were exploited when she was only a puppy.

Sometimes I think of how adorable (and tragic) her own offspring must have been, and I wonder if they, too, escaped the oppressive cycle they were born into. I imagine Rose’s brand new puppies squirming their way up her body to her teats for some breakfast, and Rose seamlessly falling into the role of the nurturing Mama. Sometimes I allow my imagination to go back further, and picture Rose as a newborn herself – her gigantic triangular ears no doubt just as tall as she was, her eyes still glued shut as she instinctively made her way to her own Mama’s teats. It’s all so goddamn incredible – the miracle of life and all that.

A mother’s love is strong, no doubt. Rose’s love for her puppies – those little slimy, squirmy critters who were taken away from her so soon – was, I’m sure, profound, just as Rose’s love for her mother was. We need our mothers, after all. We all do, regardless of what species we arbitrarily happen to have been assigned.

Like love, the exploitation of the reproductive capacities of animals also spans species. In many societies, female adultery can be punishable by death. Still in modern day, there are places where men keep a strong hold on their wives, ensuring that their reproductive parts are there to do their job – to please the men, to make the babies, to be of service.

Meanwhile, the reproductive capacities of non-human female animals are exploited and commodified: Dairy cows are constantly impregnated only to have their babies forcibly removed from them and turned into veal calves, or dairy cows themselves. (Cows are commonly known to bellow for days when their babies are stolen, so that we can then steal their milk.) Egg-laying hens are crammed into tiny cages so small that they can’t stand up or turn around, and when they are considered “spent” – when their egg-laying weans – they are killed for low-grade meat (much like the aforementioned dairy cows). And dogs like Rose are made to breed puppies that they never know so that humans can fight them or sell them.

The love between a mother and child is indeed powerful, and that’s true of non-human animals too. In virtually every form of animal exploitation, animals are ripped away from their mothers, their babies. They suffer, like we do. And they love, like we also do.

During those unfortunate moments when I am told my eggs are “drying up” because I am approaching my late thirties and haven’t mothered, I wonder if the person preaching to me is aware that when the eggs of a hen “dry up,” she will be killed. I wonder how often people who judge me for being childfree, and who assume that I am somehow deprived – or worse, selfish – make the connection between their consumption habits, and the exploitation of the reproductive parts of non-human animals – females and males alike.

It is a system that is literally banking on tearing mothers and babies away from each other.

Rose is outside now, frolicking and being silly, obsessed a little too monomaniacally with a certain spot in the soil. She’s sniffing something important, but I’ll never know what it is. I love that dog, and my love runs deep. The hope she gives me for finding serenity is impossible to explain. Her ability to trust again, even with the nightmare of a life she has seen, floors me.

It will probably offend some, and make others scoff, but I am pretty sure that my adoration for my dog is somewhere along the lines of how my mother felt when she watched me plié in that purple tutu over thirty years ago, when – just like today – my love knew no bounds.

Jasmin Singer is the author of the forthcoming memoir, Always Too Much and Never Enough (February 2, 2016, Berkley — Penguin Books USA), which details her journey finding herself through juicing, veganism, and love, as she went from fat to thin and from feeding her emotions to feeding her soul. She is the Executive Director of Our Hen House, a multimedia hub for people who want to change the world for animals. The award-winning, weekly Our Hen House podcast, which she co-hosts with her wife, animal law professor Mariann Sullivan, has been going strong for six years. Jasmin, Mariann, and Rose live in New York City.