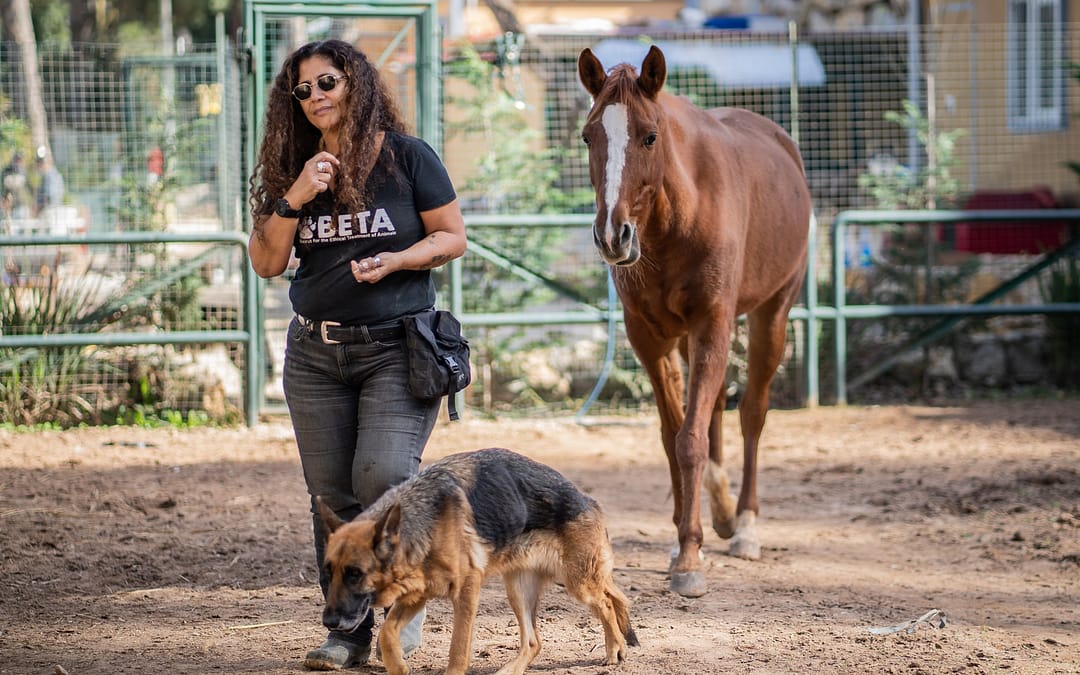 “Animals are always the first casualties of war and economical crisis.” ~ Helena Hesayne

During the 2006 war in Lebanon, also known as the Israel-Hezbollah War, Helena Hesayne tells of how she had to remove the roof of her jeep. This was to ensure that Israeli forces in the air could see that she was transporting food – dog and cat food – and not weapons. With most of the people removed from the Hezbollah area at that time, there was no garbage for the many stray companion animals to scavenge for food. So Hesayne, Vice President of Beirut for the Ethical Treatment of Animals (BETA), and two other BETA members bravely headed out to feed the animals. But she doesn’t feel it was bravery that guided her. It was just what needed to be done for the animals she loves so dearly.

“I grew up during the war,” Hesayne explains, meaning the Lebanese civil war from 1975-1990. “I was in the Lebanese Red Cross when I was 17 until I was 19, so we just got used to it,” she laughs. Hesayne speaks casually of war not because she feels it is a casual thing, but rather, as she often says, “it’s very hard to explain; you have to live it.”

For example, she describes, “When we were young and we had an exam, we used to pray in class ‘oh I hope today they’re going to bomb, that way we won’t have the exam,’ she laughs again. “We lived day by day.” And it appears that this strategy of finding humour in daily life in Lebanon is what continues to help Hesayne stay focused on the animals as the country now faces a major economic crisis.

“Animals are always the first casualties of war and economical crisis,” she says.

“I always rescued when I was a kid. If I found a stray, I was always helping.”

Then the civil war started, and Hesayne temporarily moved to France to be with an aunt. Her aunt had dogs of her own and Hesayne experienced for the first time caring for them as her own pets, walking them, and having them in the house. “In Lebanon in the seventies, having a dog in the house wasn’t very common,” she says, “maybe just the little fluffy ones. Big dogs had to stay in the garden.”

Upon returning to Lebanon in 1994, after moving between France and the US and gaining her bachelor’s degree in architecture, Hesayne then rescued a German shepherd named Brooks. Brooks’s owner had died in a motorcycle accident around the same time Hesayne’s father died. She felt a special kinship with the dog in this way. He became a constant companion, accompanying her to work and everywhere she went. She then added three huskies to the bunch, bringing all to the office each day, far before dog-friendly workplaces were a thing. “And I would only hire people who loved dogs,” she laughs.

In 2006 Brooks died and Hesayne was devastated, she says, “I was so depressed.” Soon after though, something amazing happened. She attended a fair where BETA had set up a booth. At the time the group was just starting out. Upon meeting the volunteers, they encouraged Hesayne to join them. So she did, first volunteering at the shelter on her lunch breaks, then adding every weekend. When the 2006 war started later that year, she then became more involved, helping those starving strays. As she recalls, when people fled the country, many would leave their pets behind causing many to be strays.

“In the majority of cases, animals – pets – are just a commodity, not part of the family,” she explains.

By 2008, Hesayne was named vice president of BETA, a volunteer position she continues to hold alongside her job as an architect. Today the group is made up of 15 board members and 20 volunteers, many of whom are from other countries. BETA also shelters over 1,200 animals including dogs, cats, donkeys, horses, monkeys, and some wildlife. The group works with rescue organizations in Canada and the UK (also the US when permitted) to adopt out companion animals abroad (the other animals are placed in sanctuaries or remain at the shelter for life).

Today the mentality around having dogs in the home in Lebanon has changed says Hesayne; however, she adds, the problem now is the types of dogs most people want and where they are getting them from. The majority of mixed-breed stray dogs that BETA rescues are adopted by foreign families, while puppy mills, some actually owned by veterinarians, supply “designer” dogs to locals. “They also import a lot of dogs from Ukraine and other Eastern European countries, that are supposedly pure breeds and that come with health issues.”

Once, Hesayne recalls, someone contacted the shelter seeking a purebred dog, “he said, ‘It’s like I don’t want to drive a Fiat, I want to drive a Ferrari.’” This all lends to that mentality of animals being commodities, which she says continues today. And with current economical concerns in the country, dog-dumping by those who can no longer afford their dogs feeds into mounting problem with strays.

Thankfully though, Hesayne says there has been a shift in the region regarding spaying and neutering.

“When we first started, we were the only ones at the vet to do spaying and neutering and people would tell us ‘wow, it’s against God, how can you do that, poor animal.’”

Today she says it’s common to spay and neuter pets.

There is also a change in mentality around rescuing strays, she says.

“When we used to rescue a dog on the highway, no one would slow down, they would even get upset. Now not only do they slow down, many times you have people stopping and helping us.”

As Lebanon continues to cope with economic struggles, the global pandemic, and often extreme weather, Heysane says it’s the animals that keep her there. “The shelter will never be empty,” she says. Some dogs have been there all their life, for ten years or more. But, she says, the dream of finding each one of them a great home remains her guiding light.