“I see my activism as a holistic attempt to educate young people.” 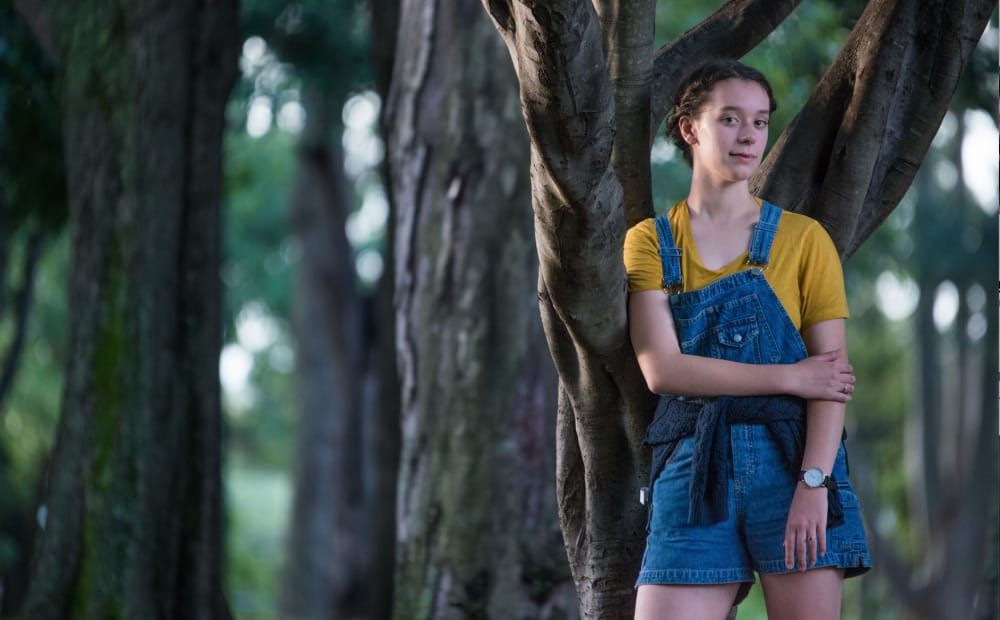 “Just a reminder,” Avalon Llewellyn typed into her phone. “Hosting a VEGAN MEETUP ON SATURDAY!”

T he post on her Instagram account, @tiedyedtofu_, quickly amassed hundreds of likes. When the day came, two dozen people turned out, most of them in their mid- to late-teens, like Llewellyn. They were snacking on vegan doughnuts and sharing recipes and stories at a park in Llewellyn’s native Australia when her phone buzzed. It was one of her 12,000-plus followers, interested in joining the group but hesitant.

“She was 50 or 100 meters away and she didn’t know if she could come or not because she wasn’t vegan,” Llewellyn recalls. “She was so nervous. I think she was about 14. She said, ‘Do you think I can come along? Will everyone hate me?’”

Llewellyn assured her the meetup was judgement-free and open to all.

“She sat down and asked us so many questions,” Llewellyn says. “She went away with so much knowledge.”

Now 17, Llewellyn first tried giving up meat when she was 12, around the time she launched her Instagram account. At 13, she went vegan, and in the years since she has helped inspire countless others to do the same. Her target audience is young people, and her main tool is online activism, although her efforts extend well past social media. At 15, she published a 100-page ebook, “The Modern Guide to Going Vegan at a Young Age.” In addition to in-person meetups, she mentors peers over email.

In all of her outreach, she aims to be approachable and understanding, a tack that she says works.

“I always say, ‘My direct messages are open. I’ll be your big sister. Email me about anything,’” explains Llewellyn, who is warm, articulate and brimming with dreams and ideas for the future. “I used to eat meat myself, and I was quite oblivious, so I approach it with kindness.”

There are lots of things for people going vegan, but what I found was there was almost nothing for young people who are still living with parents, who can’t choose everything. So I kept that in mind.

About her Instagram account, where she makes most of her connections, she says, “I seek a balance between education on animal rights, education on veganism, highlighting the wonderful world of vegan food, and posts to remind people I am just your average young person.”

“Even though I am surrounded by incredibly supportive friends, I feel that veganism and living ethically is isolating. But then young people message me and I’m reminded that this sacrifice of the social norm and easy life is shared by thousands of young people out there.”

“Sometimes all you need to do is to look in their eyes to know somebody is home.” (Photo by another activist.)

“There are so many stories I hear that need to be told. Especially in this world where the line between truth and lies have blurred. On racism, on animal rights, on politics, on life.”

Now in her last year of high school, Llewellyn has lived in Sydney her whole life and has loved animals and activism for about as long. She remembers carefully tracking and observing lizards in her backyard before she’d even started school. By age eight, she was scrawling messages onto homemade posters, including, Poachers should go to hell!

“They were these intense posters,” she laughs, adding that her parents helped her reconsider the hell part. “I had them all planned out – a poachers one, one about whales, a whole collection.”

Soon, Llewellyn was watching documentaries on palm oil and on animal agriculture’s impact on climate change. It was a video about the egg industry and its cruel destruction of male chicks that pushed her to give up meat. Her mother, creative director for a theater company, and her father, an English teacher, were supportive – an advantage that Llewellyn knows many young people don’t have.

About her ebook, she says, “There are lots of things for people going vegan, but what I found was there was almost nothing for young people who are still living with parents, who can’t choose everything. There’s peer pressure. There’s family pressure. There’s school pressure. So I kept that in mind.”

She credits her parents with giving her the courage to carve her own path.

“They always raised me to believe that I had a voice and I could fight for issues I believe in. They taught me to challenge things and always read every side of the story.”

As she’s gotten older and as her Instagram following has grown, Llewellyn says she’s learned a lot about effectively reaching people.

“At the beginning, I was unsure how to get a message across about an inherently violent industry, but still do that quite kindly,” she says. “I’m more able to articulate my ideas now. I can articulate why I’m vegan.”

I suddenly realized, wow, look at all of these people who are doing what they love and turning it into a career and activism. I was mind-blown.

Joining her school’s debate team helped, as did continuing to educate herself about factory farming and other industries that exploit animals.

“A lot of it was learning as much as I could, because the more I knew, the better I could talk about it.”

Her interest in animal rights soon led her to other social justice issues, from racism and women’s and LGBT rights to the environmental costs of overconsumption and rampant plastic use.

“What I noticed was there was so much more than veganism that I could use my platform for,” she says. “I see my activism as a holistic attempt to educate young people.”

Like Instagram, she believes art is an essential tool. Besides writing and photography, she loves embroidery – among her recent pieces is one called “Daddy, Where did the Bees Go?” – and filmmaking. She took two years of film courses in high school and now hopes to make it a significant part of her future.

Llewellyn’s camera and an embroidery piece in progress.

“I suddenly realized, wow, look at all of these people who are doing what they love and turning it into a career and activism,” she says. “I was mind-blown.”

I used to eat meat myself, and I was quite oblivious, so I approach it with kindness.

For her year 10 work experience, she interned at Animal Liberation’s Sydney headquarters. When her supervisors discovered she knew her way around iMovie, they asked her to help edit undercover footage of rabbit and egg farming.

She calls the video she worked on “heartbreaking and shocking,” but adds, “It was an honor to have the opportunity.”

Llewellyn now works at The Cruelty Free Shop, Australia’s first vegan supermarket chain, and runs their Instagram. She also plays the piano, studies French, and loves her many potted plants, which she names (Flo, Beatrice, Mrs. Dursely) and frequently features on her social media.

In the near future, she says, she hopes to release an updated ebook, launch workshops on veganism and activism, and work on an animal rights-related documentary.

“I sometimes wake up with images in my brain or opening scenes of films I hope to make one day.” Graffiti in Newtown, a particularly vegan-friendly area of Sydney.

Is it all too much for a 17-year-old who is also balancing friends, exams, and planning for the rest of her life?

Sometimes it is, Llewellyn acknowledges.

“This stuff gets a little overwhelming, when I’ve got 10 people wanting answers and loads of emails.”

She has scaled back her activism in recent months as she has struggled with mental illness, something she is open about on Instagram.

“I’ve been chatting with so many of you recently about mental illness, plants, veganism etc.,” she posted recently. “It has just reminded me of how wonderful every single one of you are and how proud I am that all of you are alive and hanging in there.”

She says that’s what gets her through harder days: all of the young people she connects with, and the change she knows they are making.