“Womanism is about using your own experience to bring
a voice to the voiceless.” 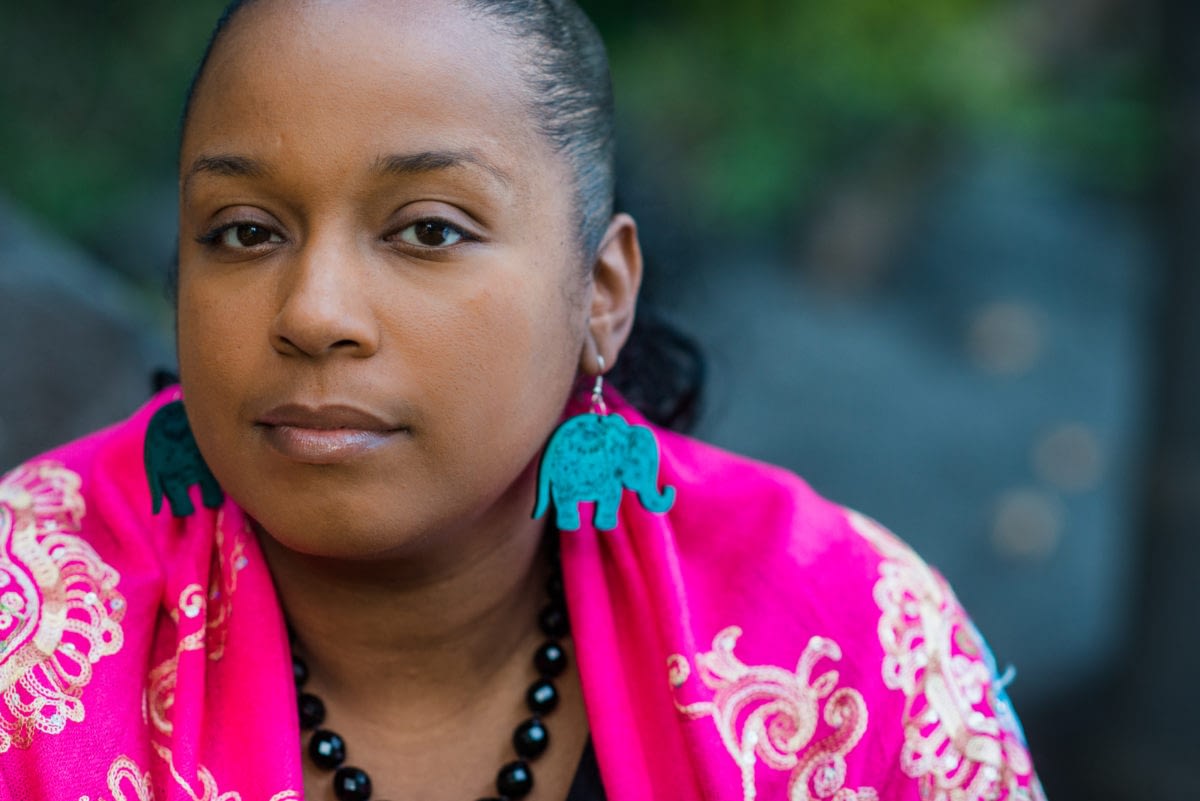 C andace Laughinghouse is a powerhouse of a woman. PhD student in theology and ethics, wife, and mother to three young girls, Laughinghouse is changing the conversation about animal rights in theological and religious circles –– and far beyond. It’s easy to see why everyone from religious figures to leading feminists to African American activists are sitting up and listen when Laughinghouse speaks. She is funny, real, and paints an intimate picture of her family life, telling me how her daughter loves hooting her favorite word – “Poop!” – in public.

Growing up in Oakland California, Laughinghouse was raised in the folds of the Pentecostal tradition, in a church started by her great-grandfather. Her grandfather and father were both pastors, her stepfather a preacher. “The women were preachers, they didn’t call the women preachers though, that’s a whole other thing,” she says, laughing. Like most things with Laughinghouse, it’s a subject we’ll come back to from several angles.

Surrounded by cousins, life in Oakland was about church, music, and family. She was raised in a single parent home until she was nine years old. “I didn’t know we were struggling then. We were eating TV dinners and I thought we were rich… Early on, my mother let me know happiness was not in things.”

The only daughter of a single mother and a fierce grandmother who only recently passed away, Laughinghouse credits the support of strong women for the path she has taken. Though her grandmother would not have defined herself as one, Laughinghouse says the family matriarch was every bit a womanist – a term coined by author and social justice activist Alice Walker to refer to black feminism, which uses the voices and experiences of black women to challenge oppressive systems.

From an early age, her mother sent her to a school where the students came from diverse backgrounds. “She wanted me to experience something different than what we were a part of. That was the earliest stage of me understanding intersectionality… seeing how other people think, and being among others. That comes into the work that I do with having empathy.”

In fact, empathy is a theme that comes through strongly when Laughinghouse speaks about her work challenging patriarchy within the church – a community and faith that remains a strong part of her identity.

That was the earliest stage of me understanding intersectionality… seeing how other people think, and being among others.

Currently completing her PhD on the topic of theology and ethics, Laughinghouse came to study animal rights through a twist of fate. She was applying to law school when she heard about a joint degree in law and seminary studies at Emory University. She didn’t get into law school, but she began at the seminary school where the first class she took was in black church studies. Coming from a Pentecostal church, she says: “I thought I was going to teach these people, and then they started critiquing a lot of black church theologies that are responsible for sexism. I was really offended, I was trying to defend the church I was a part of; I was really challenged.” The experience taught her how to critique her own beliefs, while still honouring where she’s from.

It was in that first class that she began to study women in black Pentecostal churches and womanism. Soon after, an advisor suggested she look at the religious concept of the “breath of life” in animals, and she realised that a womanist theology could be used to challenge all forms of oppression, including of animals.

She decided to switch her focus. Finding that the majority of scholars writing about animal rights from a theological perspective were white men, Laughinghouse decided to chart her own path, bringing her unique voice as an African American woman to the subject of animals in religious theory. “Womanism is about using your own experience to bring a voice to the voiceless,” she explains.

Drawing on her own ancestry, Laughinghouse looks at animal rights from a framework of African and indigenous worldviews, incorporating principles of ecology founded in the interconnection of humanity, nature, and spirit. Her unique approach sees caring for the earth and for animals as both a religious and feminist action. By fighting against oppression of animals, she says, we are fighting all forms of oppression; and by caring for animals we are caring for all of creation, including ourselves. For Laughinghouse, that includes having a vegan diet: “If I’m going to be connected with nature, that involves the food that I eat.”

Standing at the intersection of so many schools of thought, Laughinghouse often finds herself an outlying voice in her communities: a womanist and vegan in theology circles, a woman of colour in animal circles, and an animal advocate in Pentecostal and African American circles.

Womanism is about using your own experience to bring a voice to the voiceless.

So how does she process standing apart in these movements? “Sometimes I feel alone, and I question whether I’m good enough, whether I should be doing this work,” she admits. But growing up in schools filled with such diverse peoples and worldviews, and attending a college where less than 5% of students were African American taught her the importance of communication, of finding a way to connect.

“How are you going to use your voice?” She asks. “When you have a truth, how are you going to make sure it’s received? If it’s negative, if it’s not constructive, then no one will hear it.” Laughinghouse approaches discussion about feminism and animal rights within her communities with respect and compassion. She sees hope in building connections with others, believing that they will reveal the ways in which we’re alike rather than how we’re different, while still refusing to compromise the hard truths involved in the fight for justice for nature, humanity and non-human animals.

If I’m going to be connected with nature, that involves the food that I eat.

She is forthright in encouraging all people, but particularly women, to build these connections. “Your voice has to be heard. And there’s so much power when we not only just speak up but when we come together. Find other women to support, work together.”

So what’s next for the woman who is managing to write her PhD in the stolen moments between taking her daughters to gymnastics, chess, Bible study, play dates, grading papers and speaking to her church leaders about animal issues? “My husband always says: “Finish that PhD so you can get a J.O.B,” she laughs. But that is just the beginning. Her dream is to teach, to speak at schools around the country, and bring animal rights courses into diverse subject areas at colleges, demonstrating the interconnectedness of a variety of human and animal issues. It’s no small task.

“I may not see the end but I’ve got a job to do. And I’m gonna be a part of this.” After all, she reminds herself, “It’s something much greater than you.”