“Their mindset has changed. They’ve seen that
women can do it.” 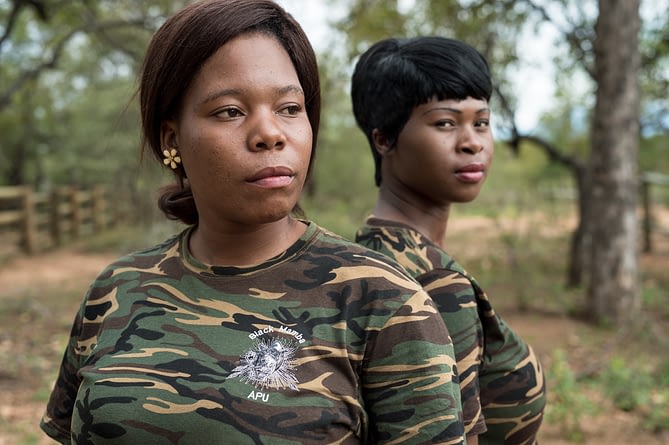 Balule Nature Reserve, part of South Africa’s famous Kruger National Park, is home to all of the so-called Big Five: rhinos, elephants, buffalo, leopards, and lions. A fair share of venomous snakes and hyenas roam its 150 square miles, too.

But the most dangerous creatures in this hot, unforgiving landscape are the human predators: poachers, often armed, looking to leave with bushmeat or valuable rhino horn.

Protecting this sanctuary is surely a task best left to men – big ones with guns, right?

For the past five years, a group of a few dozen women, all of them young and from communities immediately surrounding Balule, have been changing minds about what it takes to save wildlife. Now well known as the Black Mambas, their anti-poaching unit patrols unarmed, relying on keen observation, a visible presence and relationships with their neighbours over force.

“At first, people around the world thought that anti-poaching is a man’s job,” says Felicia Mogahane, in her late 20s and among the first of the Black Mambas when the nearly all-female unit launched in 2013. “They think women are there for taking care of babies, maybe cooking at home. They never thought that women can protect wildlife and do this dangerous job.

Their mindset has changed because of the Black Mambas. They’ve seen that women can do it.

Now with more than 30 rangers, the Black Mambas have been true pioneers in a profession that is heavily dominated by men, especially in Africa. Most of the unit’s members join shortly after high school, when many of their female peers are prioritizing marriage, home life or jobs seen as more acceptable for women.

Instead, Mambas spend months in intense field training, learning surveillance practices, compliance techniques and how to survive alone in the bush. Once in the unit, they spend three weeks away from home at a time, conducting long patrols, including at night, both by jeep and on foot. Often far from any backup, they dismantle poachers’ camps and snares, come to the aid of animals who’ve been harmed, and search for signs of intrusion, such as breaks in fencing, human tracks and even out-of-place rocks.

In the unit’s early years, members say, many recruits’ families and neighbours were unsupportive. But that has changed as the Mambas, named after the deadly snake, have become internationally known and celebrated. They’ve been featured by countless newspapers, websites and television shows.

“I don’t want to lie,” Mogahane says. “At first my family was so negative about this idea. They said, ‘Don’t go. What about us?’”

Today, relatives take immense pride in her work, she says. And when she is home between stints in the bush, she is bombarded with questions from women who want to follow in her footsteps.

“They always ask me, ‘When are they going to hire more Mambas?’”

What has garnered so much attention isn’t just that the Mambas are among South Africa’s first black women to work as rangers. It’s that what they’re doing is working. Poaching in and around Balule has decreased dramatically since the unit began, including among rhinos, the main species the Mambas were created to protect. In 2015, their success earned them the prestigious United Nations’ Champions of the Earth award.

“We are the best,” Leitah Mkhabela, a Black Mamba in her early 20s, says matter-of-factly.

Mogahane adds, “It’s been insane. They love what we are doing.”

Mambas in the field

Mambas in the field

In the years before the Mambas, unit administrator Amy Clark says, two major poaching crises nearly wiped out Kruger’s rhino population, now estimated to be around 9,000. (South Africa is home to about 20,000 rhinos, far more than any other country.)

“Bringing the same tools out of the toolbox wasn’t going to work,” Clark says. “It had already failed twice.”

Convinced that bullets would never be the way, Craig Spencer, who founded the Black Mambas, decided a unit of women could be part of the answer, along with an approach based on deterrence and modeled after the British police: “bobbies on the beat” who are unarmed but well trained, highly regarded and ever-present.

“The Mambas are the eyes and ears of the reserve,” Mogahane says. “We do visual policing. We look more carefully because we’re not carrying guns. When we’re patrolling in the bush and along the fence, we don’t have time to play.”

We are the best.

Also key is that Black Mambas come from the same communities as the poachers and would-be poachers they are working to stop. Part of their work involves teaching locals that live rhinos are more valuable to South Africans than dead ones. Besides setting an example and promoting their conservation ethos through their patrol work, the Mambas give environmental education lessons in local schools through a program called Bush Babies. They are certain that children of poachers are among those they reach.

Mamba NoCry Mzimba explains her unit’s success a slightly different way: “The poachers, they are afraid of the Mambas. They’re not sure what we’re capable of. That’s our secret.”

She adds, “When we started this, most people didn’t believe in us. But they realized they made a mistake.”

The Mambas acknowledge that their job involves danger and hardship. Many are mothers who rely on family and neighbours to help rear their children while they’re away, and while no Mambas have been killed for their work, they know that poachers have murdered many rangers at other African reserves.

“I sometimes think that they will come to our reserve and do the same thing,” Mogahane, who has two children, confesses. Of her kids, she says, “You wish you could be there to look after them. Sometimes it’s so stressful.”

But what they are protecting is worth it, and so are the now-shattered barriers they’ve broken through, she and other Mambas say.

The poachers, they are afraid of the Mambas. They’re not sure what we’re capable of. That’s our secret.

“I’ve committed myself to saving rhinos and wildlife,” Mogahane says. “I’m used to staying in the bush and doing my job and my beat. As long as I go home sometimes to see my family, it’s ok for me. The animals need my love. As a woman, I feel proud for myself. When I wake up in the morning, I’m like, ‘Wow, it’s me doing this.’ We are sending a message to young women that they must stand up and do things for themselves.”

Mzimba, who says she has loved animals and nature all her life, feels much the same.

“It’s ok,” she says of the job’s sacrifices, “because I’m trying to save animals. Now it is our time. It is our time as ladies to protect nature and make sure everything is better than before.”

She says she has two messages for her community – one for those who support conservation, and another for those working against it.

Mzimba pauses a moment, and then continues. “To poachers, you heartbreakers, you heartless people, stop poaching the rhinos. Because sooner or later, you will be poached.”

About the animals they are saving, another Mamba says, “They are just like us. They want love.”

Now it is our time. It is our time as ladies to protect nature and make sure everything is better than before.

She tells the story of one rhino in particular, a male whose mate was shot and killed by poachers. Ever since, he has avoided the place where the shooting happened.

“I can feel that he’s feeling pain. I can say they are just like humans,” she says.

“When they hear our voices, they know it’s us, and we can see they are happy.”