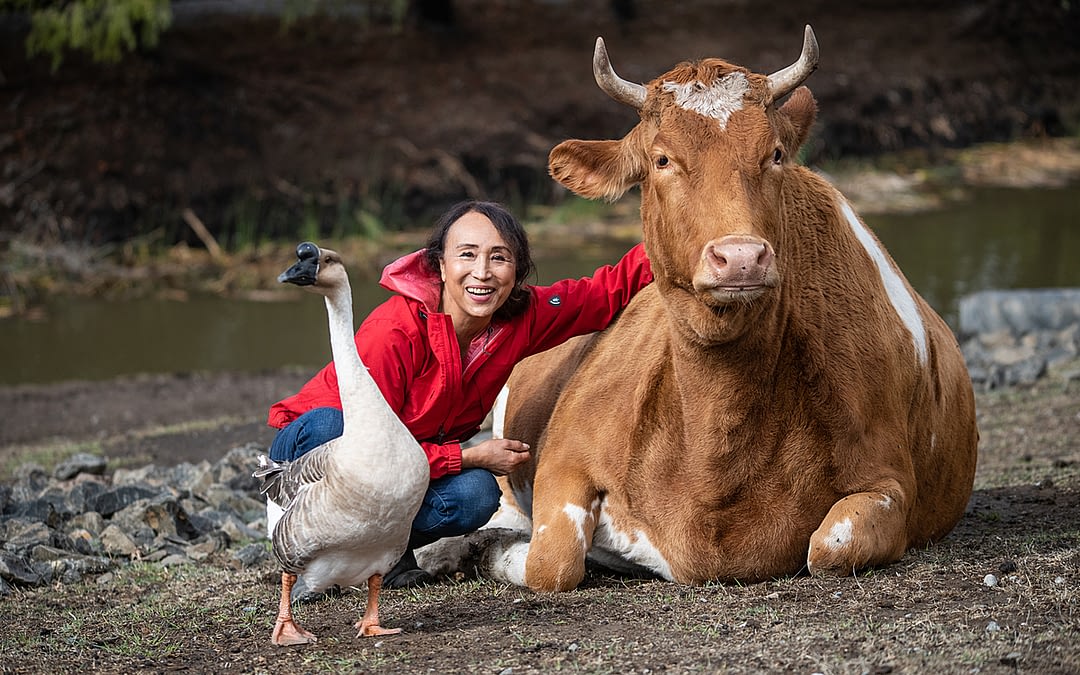 “Why am I making cheese out of cashews and legumes? Because it’s all about the animals. They are entitled to a life of their own, to live life according to their wishes, and that’s a story we want to tell.” ~ Miyoko Schinner

Miyoko Schinner is the founder of the animal sanctuary Rancho Compasión and of Miyoko’s Creamery, a multi-million dollar vegan cheese and butter company.

Vegetarian since the age of twelve and vegan since the mid-1980s, Schinner has dedicated her life to advocating for animals. Her sanctuary, with compassion at the heart of its name and mission, provides a lifelong home for rescued farm animals and strives to change public perception about animals typically viewed as “food.” In the video featured here, see Schinner at the sanctuary as she proudly shows off the “Phenomenally Vegan” tattoo she got on her 60th birthday.

Continuing with her compassion-centered theme, Schinner focused her skills as a chef on bringing compassion to the table with dairy free cheeses, spreads, and butters. Miyoko’s Creamery products are all 100% vegan, lactose free, GMO free, palm-oil free, and cruelty-free. Schinner invented the category of artisan vegan cheese, and she is often referred to as the “Queen of Vegan Cheese” or as the woman on a mission to revolutionize the entire dairy industry. Schinner’s mission to create the creamery of tomorrow also sees today’s independent dairy farmers as allies who can play an essential role. Her company works with them to grow plant milk crops and thus, transition to the prosperous world of plant-based dairy. The Miyoko’s brand promise, reminiscent of her tattoo, is to be “phenomenally vegan in everything we do.”

“From our humble beginnings with four employees in Miyoko’s home kitchen, to a 30,000 sq ft. state-of-the-art facility in Sonoma, we’re leading the way in transforming the future of the creamery. In just a few short years, our products can be found in 1,000’s of stores and our ‘cheese’ wheels are on the road to global distribution in the near future. We’re changing perceptions of vegan food, to inspire people from all walks of life to enjoy a phenomenally vegan lifestyle.” ~ the Miyoko’s Creamery website

In 2021, Schinner’s company continued to attract millions of dollars in capital investments and won a lawsuit to maintain the right to refer to her products as “butter.” With food as a powerful form of activism, the Miyoko’s Creamery mission continues on, striving “to create the blueprint for the animal-free dairy food system of tomorrow, for the urgent salvation of our planet and all that we share it with.”

“One thing I love about elephants is the positive energy that I receive from them. They forgive. They never forget, but they forgive.”

Sangduen “Lek” Chailert has come to be known throughout Thailand and the rest of the world as “the elephant whisperer”. She has devoted her life to ending the abusive use of elephants in tourism and logging industries and is the founder of Elephant Nature Park, a 250 acre sanctuary for hundreds of rescued elephants and other animals.

A Tribute to Gill Dalley of the Soi Dog Foundation

This new short film profiles the life and work of the incredible Gill Dalley, co-founder of the Soi Dog Foundation.

Sadly, Gill passed away earlier this year after a short illness. It gives us chills to see and hear how eloquently and consciously she talked of mortality and the urgency of living––all without knowing that she was living her final months. The film is dedicated to her inspiring legacy.

Meet the wonderful Hazel Zhang! After learning about the suffering of farmed animals in the documentary “Farm to Fridge,” Hazel became vegan. Shocked that there wasn’t much content on the subject of cruelty-free living in Chinese, Hazel started a blog called VegPlanet where she started translating foreign-language articles.

Hazel glows with a warmth and welcoming smile. As Unbound team member Kelly Guerin was setting up for their early morning interview, Hazel took the time to walk around the converted apartment office space to talk to each of her 17 staff personally while her rescue dog Baibai ran underfoot. Hazel said that she had never really had the chance to get to know an animal personally until she found Baibai in a village.

Becoming vegan, launching a blog, and raising a dog in Beijing had its challenges, but today Hazel carries herself with the confidence of a true activist, rooted in her commitment to end animal suffering and help promote the compassionate lifestyle that changed her life.

Today, Hazel’s blog VegPlanet employs a full-time staff and publishes daily original content aimed at promoting veganism in China as a conscious, positive, and happy lifestyle to a following of nearly 300,000 subscribers.

“I reach out to a worker and receive five panicking birds. The five in his other hand get stuffed into a machine. Five set free, five for the machine.”

Meet Lina Lind Christensen, the courageous and fascinating woman from Denmark who rescues animals from the brink of death and gives them sanctuary at her home. A new short film produced by Jan Sorgenfrei for the Unbound Project.

One of the threads running through the Unbound Project is a celebration of women who have made a difference for animals in previous eras. So often their stories are forgotten over time, and we want to change that. We want to celebrate these women and share their stories with the world. We were absolutely thrilled when we received a grant from Brock University that allowed us to hire Brittany Brooks to make a short animated feature about Ada Cole, an English woman who fought against the cruelty of the live horse export industry in the early 20th century.

Ada Cole did not set out to be an activist, but once she came face-to-face with the cruelty of the live export industry she knew she had to do something about it. She was an ordinary citizen who took matters in to her own hands. She witnessed cruelty and refused to look away. Cole used photography and film to document what she saw and hoped that the resulting images would get others to join her campaign against these cruel practices. As one might expect, she did not receive a warm welcome from those working in the live export industry and her efforts to take pictures were often thwarted. Cole hired a painter named Kurt Peiser to go undercover dressed as a dock worker so that he could sketch and paint what he was seeing as horses were unloaded from the ships that had sailed from England to Belgium.

Given the prevalence of visual encounters (witnessing, photography, film, art) in this story, we knew that we wanted to tell it in a very visually appealing way. We think that Brittany’s work is a perfect fit for The Unbound Project!

Brittany created over 100 hand painted water colour pieces for this animation and those paintings were then animated in Adobe After Effects.

We asked Brittany to tell us a bit about her involvement with this project.

Was there something about Ada Cole’s story that really stood out for you when you were doing the research for this project?

I was immediately drawn into Ada Cole’s story because of her ambition and determination. In a day and age when women did not even have the right to vote, Ada was driven to better the world for animals. I also found her story very inspiring because she used her camera as a tool of social justice. As a visual artist, it was exciting to see Ada use photographs and paintings to show the truth that people chose to ignore.

What did you learn by doing this project?

Before this project I had never heard of Ada Cole so I was very keen to begin researching her. Not only was I unfamiliar with her story, but I was also unaware of the way in which animals were being treated in the late 19th century. I learned how important activists like Ada were at this time who chose to question vivisection practices and were interested in animal welfare.

From a technical perspective, I learned many new animation techniques that I had never experimented with before. I used a process that required both analogue and digital methods. I began by using the research I had conducted to create a storyboard outlining the key points of Ada’s story. I then hand-painted all of the characters, backgrounds and scenery using gouache and scanned them into Photoshop where I separated each element from it’s background.

Using Adobe After Effects I was able to digitally animate the elements by layering and mapping their movement paths. Since I had never used a digital technique like this before I relied heavily on After Effects video tutorials and online forums. Combining my previous analogue animation experience and these new digital techniques I was able to create this work using an entirely new approach.

How important is art in connecting viewers with the past?

I think that art actualizes the past and is an invitation for viewers to look at a historical moment through a new lens. With Ada Cole’s story, information was not very easy to find and this required me to do some deep research. Hopefully this artwork will make Ada’s story more accessible and present viewers with a snapshot of her life and work in a via visuals and sounds.

What do you see as being the connection between art and activism/social justice?

Both artists and activists question boundaries and challenge cultural issues. Art becomes even more powerful when it is used as a tool of social justice as it acts as a vehicle that empowers individuals and communities. Art belongs to everyone and helps give a voice to those who want to share the truth and advocate for what they believe.

Why was this a project that you wanted to take on?

There were many reasons I signed up for this special project. It began by being very inspired by the mission of the Unbound Project and my desire to help celebrate these women who are interested in animal welfare.I listened to Jo-Anne McArthur give a lecture on her work and was absolutely taken by how powerful her photographs are. I also enjoyed that Unbound was a multimedia project and was open to using a variety of mediums and art forms to share these stories. I am so excited to be a part of Unbound, as it was a huge learning opportunity and a wonderful new challenge for me as an artist and activist.

Brittany Brooks is a multidisciplinary artist who splits her time between St. Catharines and Toronto, ON. Her practice includes, but is not limited to; visual art, performance and music.

Brittany recently earned her undergraduate degree from Brock University, majoring in Studio Art. She has participated in residencies at Spark Box Studios, White Rabbit Arts, and The Green Belt Gallery which cultivated her solo exhibition Rutabager and her original handmade layered projection show The Fireside Book of Fictitious Folk Songs. Her band Creature Speak released a full length album Shadow Songs, which has since drawn international praise from Bandcamp, Bitch-Media, Exclaim, Folk Radio UK and more. She is a Jr. Programmer for the In the Soil Arts Festival and is currently working at the Art Museum at The University of Toronto.