“The connection is real.” 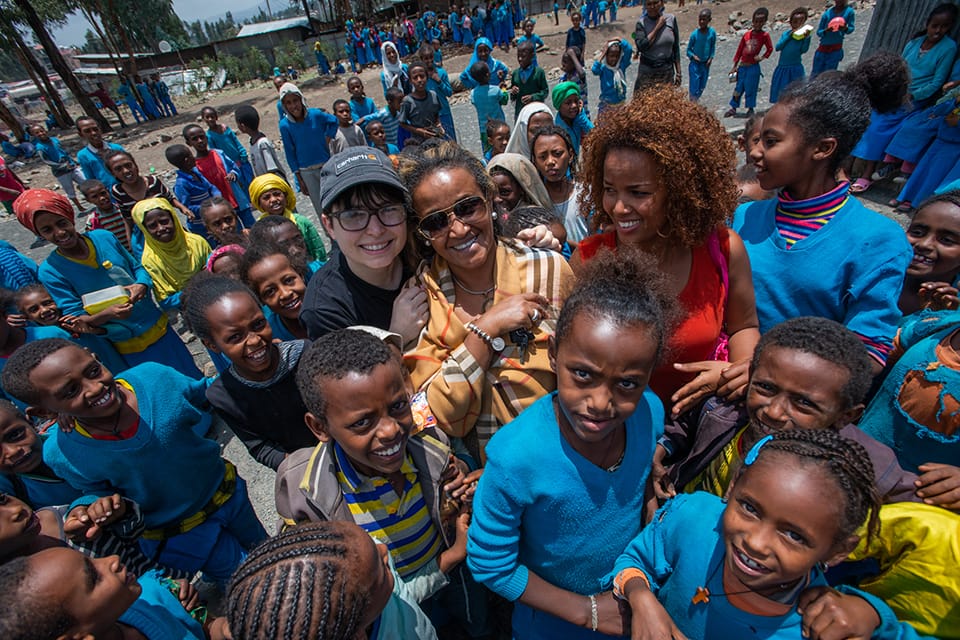 As Dawn Moncrief sits down for this interview, she is tired and jetlagged from a long intercontinental flight. Even so, she is eloquent and thoughtful. It’s obvious that her knowledge of the food system is immense and that her dedication to reforming it formidable. Moncrief is the founding director of A Well-Fed World (AWFW), a non-profit hunger relief and animal protection advocacy organization based in Washington, DC. It’s a job that takes her all over the world, working with local partners on a strategy to tackle some of the biggest global challenges.

“I was very attuned to issues around hunger,”

Over one hundred children enjoy nutritious plant-based meals provided by IFA at this school.

The organization is unique in its dual mission to tackle two of the world’s most complex issues: world hunger and the suffering of animals used for food. It’s no small feat, but Moncrief hasn’t let that stop her from working to change the conversation about food justice, and proving that the same foods that are best for people, are also best for animals, and the environment.

Moncrief moved to Washington, DC in the mid-90s to attend George Washington University, where she earned two master’s degrees in international relations and women’s studies, both with a focus on economic development. In DC, she had the benefit of exposure to key policymakers, and the headquarters of major development organizations, providing her with vital insights into the food policy landscape. She had wanted to work on poverty issues for as long as she could remember. “I was very attuned to issues around hunger,” she reflects.

It was at grad school that an acquaintance first introduced her to veganism. Moncrief had been vegetarian since she was a teenager. “I wasn’t politicized around it,” she explains, “I just knew I didn’t want to hurt animals.” She had never heard of veganism, but as she began to research the global impacts of meat, egg, and dairy consumption, she realized that it perfectly aligned with her ideas around food security and hunger. Moncrief could see that meat consumption hurt low-income communities, especially women and children. Her work began to focus on the ways in which the production and consumption of animal-derived foods increases disparities, exacerbates global hunger, and negatively impacts communities’ access to natural resources.

“It’s important to be authentic, to inspire people.”

On sanctuary tour after conference presentation at Farm Sanctuary in Watkins Glen, NY.

Moncrief began to unpack the system that enabled food to be unjustly distributed, with staple food crops being diverted to high-income countries that were able to outbid low-income countries for crop availability. She saw that this put upward pressure on prices, forcing low-income countries to export large quantities of food – both crops and animal products – at high prices, even though their own people were hungry. She learned about animal agriculture companies “land-grabbing” in low-income countries so that they could establish factory farms, which pollute the environment and harm local farmers’ ability to grow food, further increasing hunger. But looking at the organizations working in international development, or even in food policy, she was surprised to find that they wouldn’t advocate meat reduction (not even as “part” of the solution).

After finishing grad school, Moncrief began working with women-in-development organizations, but she felt complicit working within a framework that used meat and dairy in their food programs, while these products caused such devastation.

Fortunately, she chanced upon a presentation by Pattrice Jones discussing animal agriculture and its connection to global hunger. Inspired by jones and other activists connecting the dots and deconstructing the global food system, Moncrief began working within the animal advocacy movement. Eventually she was able to make the Plants-4-Hunger educational campaign that she had started developing in grad school into a gift-giving campaign that helps alleviate world hunger using plant-based foods, a unique take on the traditional ‘animals as food’ gifts programs. When her passion for global food justice eventually called for a dedicated organization, Moncrief founded A Well-Fed World, utilizing the Plants-4-Hunger as their flagship program.

With many organizations focused on technological “fixes” to reduce the negative consequences of meat consumption (such as improving feed conversion inefficiencies or decreasing the inherently harmful environmental impacts of rearing animals for food), reducing consumption through behavior change was dismissed or ignored. Reduction of animal products was unpopular and, importantly, challenged big business. So Moncrief decided to address the issues by connecting with NGOs and influencers to put plant-based hunger and climate solutions on the agenda.

“It’s important to be authentic, to inspire people.”

AWFW addresses the harm done by development programs using animals, and dispelling the myth that animal products are a superior option for people in need of food. Moncrief created the Humane Facts campaign, which unpacks misleading food labeling and exposes the true meaning behind the language of “humane” meat – words like “free-range,” “cage-free” and “grass-fed,” which are used to make consumers feel that they are making healthy and ethical food choices.

Through its partnerships and global grants program, AWFW provides vital funding to organizations to support vegan feeding and farming programs for low-income communities, both in the United States and internationally, as well as farmed animal care and rescue programs Their most significant partnership is with the International Fund for Africa in support of their vegan school lunch program in Ethiopia. “For some of these kids, it’s the only meal they’re getting,” explains Moncrief.

“Not just the overconsumption of meat, but meat itself as a form of overconsumption; so that every time you’re eating it, you’re thinking about how resource intensive that is.”

Through these international partnerships, AWFW is reframing what makes a ‘healthy’ diet and challenging the dependence of the international development industry on animal products to feed people. Instead, it is highlighting the benefits of plant-based food choices for undernourished populations, and proving that veganism can offer a more sustainable solution to world hunger and food security issues.

By shifting to plant-based foods and using veganic farming practices, the impacts of livestock on resource scarcity, environmental pollution, land degradation, and climate change can be avoided. Where animals overgraze and degrade the soil, growing plants helps build health back into the land. Plant-based farming empowers communities, who can feed themselves high-density nutritious foods that also strengthen, rather than pollute, local ecosystems and natural resources. It’s a win-win.

AWFW advocates veg-friendly policies at local and federal levels, working with think tanks and policymakers to incorporate plant-based food strategies into their programs. The organization analyzes research and communicates the food security benefits of plant-based food and farming, thereby advancing structural change that supports its vision of a just food system where all people have enough of the right kinds of food, and in which people are nourished, animals are spared, and the environment is protected.

IFA and AWFW team members with some of the chefs for the IFA-sponsored plant-based lunch programs.

AWFW’s strength is in its willingness to challenge some of the most harmful – yet accepted – behaviours in society, regardless of backlash from animal industry bodies or other organizations with vested interests.

While Moncrief is clear that veganism is not a silver bullet for world hunger, she is developing a more nuanced conversation around consumption, and empowering people to understand the impacts of their choices.

“The connection is real.”

“Reducing meat consumption and going vegan does take pressure off the food system so that basic food staples are more accessible to low-income countries,” she explains.

She becomes emotional as she tells the story of a farming family in El Salvador who had to choose between selling their crops to pay for the lease of their land, and feeding their children. Two of their children died.

“These very poor countries with lots of hunger are exporting either meat directly, or food to be used for meat and other animal products, to high-income countries,” she says. “So, the connection is real.”

With Moncrief at work, it’s difficult to doubt that things are changing for animals. AWFW’s strong message and research-based advocacy is making huge strides possible in terms of re-framing the role of animal products in food policy and hunger alleviation. Where other organizations shy away from advocating for unpopular solutions, AWFW sticks to its mission, bringing plant-based hunger and climate solutions into the mainstream, and proving to critics that what helps animals and the environment also helps people – there’s no need to choose.