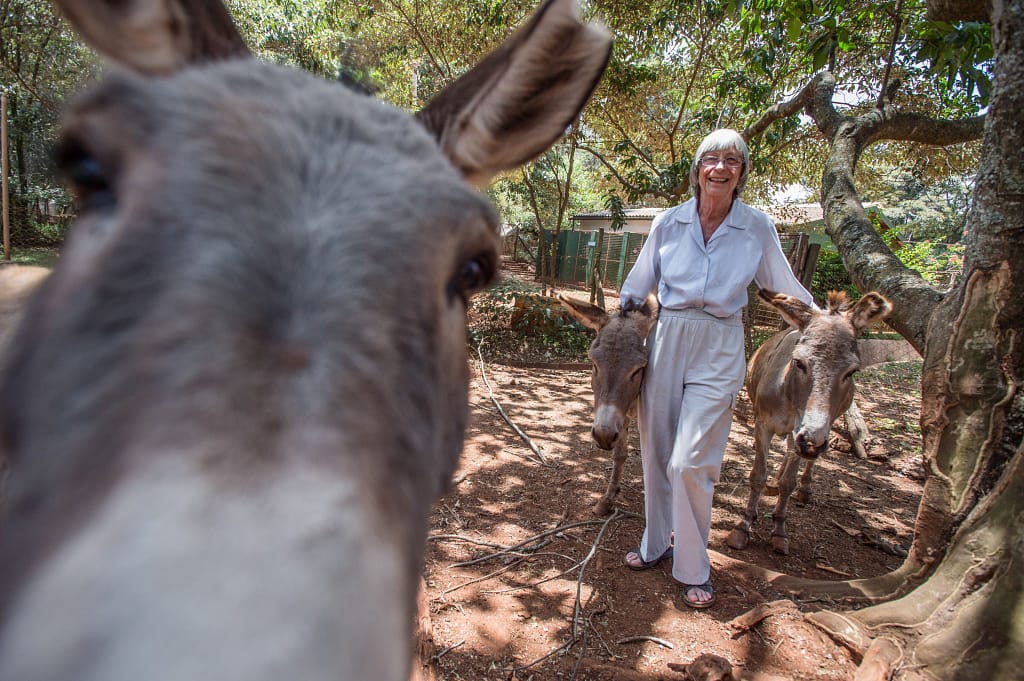 A life spent dedicated to animals yields a lot of lessons. The first that comes to mind for Jean Gilchrist is that you have to take the bad with the good.

Among the bad: The horrific slaughter methods that she has been documenting in Kenya for decades in an effort to change them. Studying a recent photo of roped camels about to be killed, she notes, “Some of them are crying.”

Next: The public’s indifference. “In a developing country where there are an awful lot of human problems, people are apt to think that animals and their welfare aren’t important.”

And then there is her organization’s bank account balance – a drop in a sea of need. “It’s very hand to mouth, this place,” Gilchrist says of the Kenya Society for the Protection and Care of Animals in Nairobi, where she began as a volunteer in the late 1970s.

But there is also so much good, like the transformations she’s seen among the KSPCA’s rescues, several of whom are asleep in her office. “These are my dogs,” she says as she goes around the room introducing them. Charlie, who is curled up under a desk, was found on the side of the road. He had been adopted but the family brought him back, terrified and shaking. Gilchrist had just lost a similar looking companion whom she’d loved dearly.

Gilchrist’s dogs at the KSPCA

A native of Scotland, Gilchrist has spent the past four-plus decades in Africa. With cropped grey hair and wire-framed glasses, she is humble, unassuming, friendly and soft-spoken – at least until her cause is better served by raising her voice.

When the topic is the treatment of animals, Gilchrist admits that her normally quiet demeanour is quickly forgotten.

“I do get attention,” she says.

Her title at the KSPCA is director of animal welfare, but in practice she does a bit of everything, as does the organization. Most of its funding – all from donations – goes to its rescue and sheltering operation, which includes dogs, cats, donkeys, goats, and pigs, with an average of about 200 individuals in residence at any given time. Some come from abusive owners while others come off the streets. The KSPCA also runs spay/neuter campaigns, investigates and responds to cruelty and abandonment cases, and educates school children about animal welfare, along with its efforts in Kenyan slaughterhouses.

At the center of it all is Gilchrist, who embraces the moniker her work has earned her here: the madwoman of animals.

She says her interest in animal welfare has always been there, ingrained like an instinct. She recalls her first rescue, an injured mouse who she tried to save from a cat when she was a little girl. She took it home and nursed it, but it died the next day.

“I’ve always had this – taking in things that needed help.”

She first came to Africa with her husband, who was a surgeon and “bush doctor,” initially in Tanzania. Eventually they moved with their two young children to Kenya, where Gilchrist’s husband served as a flying doctor aboard air ambulances.

Gilchrist found her own place after a feral cat who’d been living on the roof of their rental house had kittens. Afraid the babies would fall, Gilchrist looked to the KSPCA, started around 1910 by women who gave water to oxen carrying goods into Nairobi.

The KSPCA loaned Gilchrist a trap so she could bring in the cat family. She soon started volunteering, and after about a decade, in 1986, when a field officer position opened, Gilchrist took it.

She quickly began going to slaughterhouses, using advocacy, training, and what she calls her Scottish temper to promote less horrific killing methods.

Rescued kitten at the KSPCA

Despite her inclinations, it’s work she says she’d never imagined for herself, and 30 years later, she’s seen both exciting progress and heartbreaking regression.

Slaughterhouses are going up everywhere now and they’re not using humane killing. They’re bashing, stabbing, putting them down and cutting their throats. And it’s got to stop.

“It’s all dissolving,” Gilchrist laments. “Slaughterhouses are going up everywhere now and they’re not using humane killing. They’re bashing, stabbing, putting them down and cutting their throats. And it’s got to stop.”

Rescued dogs at the KSPCA

Rescued dogs at the KSPCA

In addition to slaughterhouses, Gilchrist is a regular at animal-related conferences and workshops, always with her thermos of tea and often the only voice speaking for Kenya’s domestic animals, rather than wildlife, which receives far more attention.

Kate Chumo of Africa Network for Animal Welfare praises Gilchrist for the inroads she has made promoting adoption among Kenyans and changing people’s perceptions of dogs and cats. Chumo also notes that Gilchrist isn’t one to mince words.

“Kenyans are very practical people,” Gilchrist says. “It’s a matter of, ‘What can the animal do for me? And if it can’t and I have no use for it anymore, it’s not a big deal.’ So I have to keep saying, ‘We’ve got to consider the animals. They’re not just here for use and abuse.’ So I do get quite vocal.”

Rescued donkeys at the KSPCA

Sadly, it is often government veterinarians whom Gilchrist  finds herself reminding, prodding them to adhere to their Hippocratic Oath. Indeed, the KSPCA has been instrumental in progress against strychnine, a painful poison that the government’s veterinary department was using widely to control Kenya’s street dog population.

Gilchrist’s preferred tool for changing minds is the education of school children. The KSPCA both hosts groups and makes visits to schools, which Gilchrist believes is making slow but steady headway against the public indifference she spends so much time fighting.

In the meantime, there is the organization’s rescue work.

“So many animals need help,” Gilchrist says. “If you just concentrate on education, what happens to the 40 donkeys that were dumped in town?”

What gets her through? “Curry and beer,” she jokes.

The KSPCA is a “minimum-kill” operation, meaning it only euthanizes animals who are very old, very sick or whose “character has been too destroyed” by the trauma they’ve endured. The organization vets adopters and checks in on adoptees where it can.

And rather than small, individual cages, animals in its care are kept in groups, and are let out in rotation to romp and sniff during the day.

“We find they’re much happier running about and being free,” Gilchrist says. “The same with cats. People say cats can’t be together, but they can.”

As heartening as many of their rescues are, Gilchrist acknowledges that her life’s work is often wrenching.

“It’s not nice,” she says. What gets her through? “Curry and beer,” she jokes.

More seriously, she says photography and walks in the evenings with Charlie and her other dogs. And, of course, the progress she’s been a part of. During her time at the KSPCA, it has grown from three employees to today’s two dozen. “We have expanded a lot,” she says. “We’re doing a lot more work now.”

In recognition of her contributions, the queen of England in 2009 awarded Gilchrist an MBE, or Member of the British Empire.

“Completely out of my element,” she says of the Buckingham Palace ceremony.

That’s not to say that the award hasn’t been useful, especially with authorities. “When you’re writing letters to people and being official and you can write MBE, it does help.”

Jean Gilchrist with a rescued pig at the KSPCA

As for the KSPCA’s future, Gilchrist dreams of a fundraising committee that might generate reliable income for stronger education and investigative programs and some improvements at the shelter.

She also hopes to find someone to step into her shoes, as she knows she can’t work forever.

“We do our best with what we’ve got,” she says.

She also hopes to find someone to step into her shoes, as she knows she can’t work forever.

Although she’s never really wanted to leave Kenya, she sees Scotland as the prudent choice for retirement.

“I’ve still got enough energy, I think, to last another year.”

When Gilchrist does finally go, she knows this much: Her dogs will go with her.

“Everybody says I’m mad, but I can’t leave them behind,” she says.

Learn more about the KSPCA and support their work to protect animals.