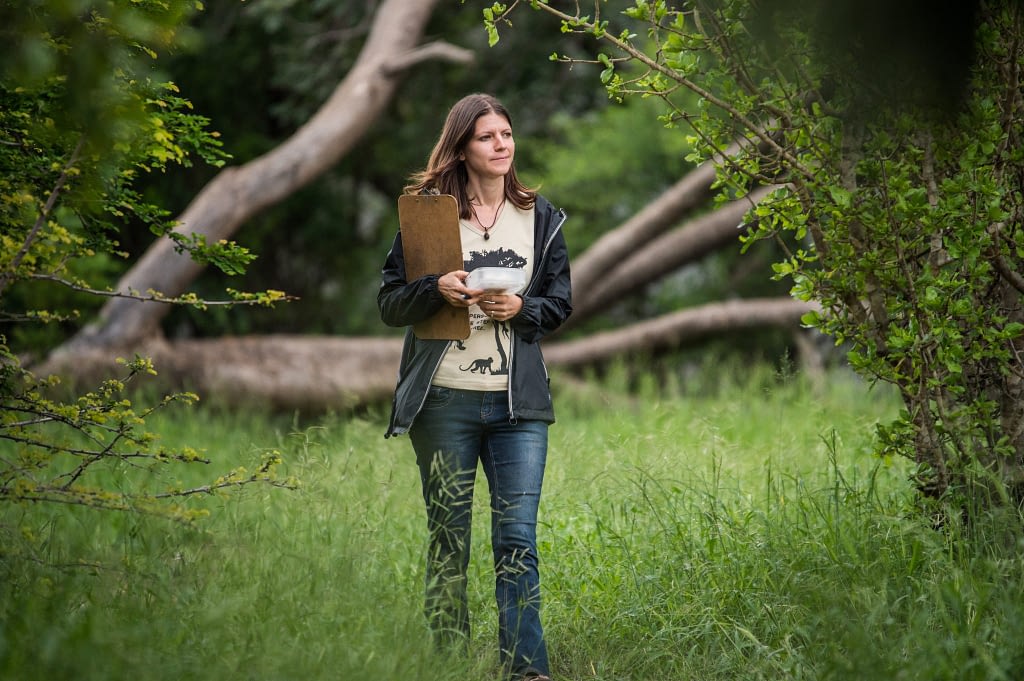 Every morning at the Vervet Monkey Foundation in Tzaneen, northern South Africa, Josie Humble is out of bed before 6 a.m. Her work day doesn’t end until she goes to bed that night, so interviewing her for an Unbound Project profile meant following along as she gave bottles to vervet babies, supervised medication and medical care for various others, directed staff, delegated, organized, caught up on paperwork, and made many rounds of the sanctuary to check on the individuals in her care. Seeing just a few days of Humble’s non-stop life caring for the hundreds of animals at the Foundation, it was easy to understand why she’d received so many Unbound nominations.

Since I was really young I’ve always had a passion for animals.

Born and raised in England, Humble’s journey to running a sanctuary in South Africa started early. “My parents were vegetarian and they decided to raise my sister and I vegetarian as well,” she says. Humble’s mother worked as a natural health therapist, and when she attended conferences to promote her work, Humble would be right there beside her with her own miniature table, encouraging people to sign petitions and handing out information about fox hunting, animal testing, and other animal issues. “I feel very privileged and honoured to have had that upbringing because it’s led me to where I am now.”

Determined to have a career helping animals, Humble was over the moon when her father brought home a pamphlet about an animal care course at Sparsholt College of Winchester when she was a teenager. “I didn’t even think [that] existed at the time. I got very excited about it and signed up… I was 16 at the time, and that was 20 years ago now.”

Throwing herself into the coursework, she found that she was just as passionate about the practical side of animal care as she was about the ethics and welfare principles that the students were learning about.

But not all of the students made the connection that Humble did. As the only vegetarian in her class, “People used to joke about me being vegetarian, put an extra piece of meat on my plate, things like this,” but Humble persevered with her beliefs that all animals should be treated with compassion. “I’ve always tried to get people to change their ways of thinking,” she says of that time, not knowing that this attitude would be instrumental in changing the direction of conservation at a sanctuary half a world away almost two decades into her future.

After graduating, Humble’s hard work paid off when she was offered a job as a veterinary technical advisor in Somerset. It was a dream opportunity that allowed her to learn even more about caring for animals. Humble worked with the company for four years, but it was a fateful four-week sojourn that would set her on the path that would ultimately become her life’s mission.

Eager for new experiences and to learn about different animals, Humble set to researching opportunities online and her interest was piqued by the Vervet Monkey Foundation’s volunteer program in South Africa. Vervets are considered vermin in South Africa, making orphaned and injured monkeys a common occurrence, with few people willing to care for them. And while the living conditions at the sanctuary would have been daunting to most people, Humble knew this was for her. “It was vegetarian and very basic living, with no electricity. Volunteers were housed in tents; this was bush living and I thought: this sounds amazing.” She approached her boss to request the time off, and while she received the consent she was looking for, it was on the condition that she come back. She and her boss joked that Humble may fall in love with Tzaneen and the sanctuary; it would turn out to be more serious than either of them knew.

Your one condition is that you return, because I know you might end up falling in love with the place and the animals and not coming back.

“It was the best month of my life,” Humble says now, and then pauses, listening to the monkeys. “I don’t know what’s going on with them today. They’re like ‘something’s scary!’ Look how they suck on each other’s ears,” she laughs. The sanctuary that started off as a four-week sea change is her whole life now.

The decision to relocate to South Africa permanently seemed hard at first, but ended up being the easiest choice that Humble had ever made. After she arrived back in England, she was searching for a way to remain involved with the sanctuary remotely. When a position came up, however, it wasn’t remote: it was an opportunity to be the on-site volunteer coordinator. Humble broke her promise to her boss. “I remember being on the phone and my mind quickly turning, like could this actually happen? And I just said ‘Yes! I’m coming!’ And it was as simple as that!”

The logistics of moving to a new continent were all consuming, and amid the turmoil of selling her house, resigning from her position, and packing up her possessions, Humble had one main priority: “I knew that the only way I could go back is if I could bring my dog, Reuben.” Less than a year after originally volunteering at the sanctuary, Humble and Rueben returned permanently in February 2006.

After around two years of working at the sanctuary, Humble was diagnosed with a painful condition called fibromyalgia, which seemed like it might put an end to her work with the animals. She searched desperately for a solution. “After a couple of years being here I found myself unable to do the things I needed to do for the monkeys. I wasn’t able to walk around so much. I tried a lot of different medications because I wanted to be out there helping.”

As she was struggling to find a solution that would get her back on her feet, Humble watched a lecture by animal activist Gary Yurofsky. Immediately, her life changed. “From that moment, I never ate cheese, eggs, or milk ever again… It was like a lightbulb moment like: what on earth am I doing? And why didn’t I see it in the agricultural college when I was actually there? How did I not see that?” she switched to a completely vegan diet and in doing so, Humble found the silver bullet that she had been looking for to improve her health. “After about six months of being vegan, I found my health dramatically improved and I actually came off all my medications.”

Josie and a sanctuary worker

Her recovery let her re-dedicate herself to the monkeys with a new perspective on conservation. Humble’s motivations for moving to a plant-based diet weren’t simply about farm animals—she became passionate about the impact of animal agriculture on the environment, including the habitat of her beloved vervets. “Eating animals affects the environment, it affects the forests, it affects all wildlife everywhere,” she says, and hopes that other sanctuaries will make the connection and transition to plant-based diets for their kitchens, as the Vervet Monkey Foundation did shortly after du Toit made the change herself. “For me, working at a sanctuary and eating meat don’t go together at all.”

How could I go and eat a burger or a steak… knowing that we’re cutting down forest and planting massive monocrops to feed these cows?

One of the sanctuary’s other missions has always been to keep the animals as wild as possible, limiting human interaction and increasing each animal’s chances of living the most natural life possible. Humble worked with sanctuary staff to develop a method of helping orphaned monkeys learn to feed themselves and to bond with a foster mother. “That’s what I believe rehabilitation should be about,” she says. “Getting these animals wild and as happy as they can be back with their troop so they can actually have a real family in the wild rather than stay with us and spend their lives looking for attention from us.” The technique has been so successful that other sanctuaries in Africa are running their own pilot programs to help with re-wilding animals who have come into their care.

Josie and a baby vervet

Humble and sanctuary founder Dave’s ultimate plan for the monkey troops that can live independent of humans is an ambitious project: The Vervet Forest. Right now, they are looking for a suitable piece of land—hopefully around 500 acres—that will be protected from poachers and loggers, helping not just the animals recover, but the ecosystem as well: “We don’t want it just to be a release site. The vervets help to repopulate the trees as well… We’d like to see everything thrive with them.” There are also plans for the Foundation to use the space to run education programs: “We’d like to run workshops on human-wildlife conflict, offer veterinary courses, primate courses, also about lifestyle and living. We’d like to educate people about reducing their carbon footprint and about how can they do something personally to protect the environment as well as animals. That’s the big vision and the big plan!” She laughs, but it’s clear that she’s serious about this big dream.

Humble and Dave are now the subjects of a documentary, also called The Vervet Forest. It’s a beautiful project that seeks to portray the monkeys not as vermin, but as Humble sees them, individuals worth caring about and worth saving.

There is still a long way for Humble to go to achieve her dream of establishing The Vervet Forest, but her passion for her work and her tremendous empathy for animals keep her focused on that goal. “I think that everything I’ve done has basically led me to being here, doing what I can for these animals… By living true to my value and within my passion, I found my purpose.”