“Let’s change the world together” 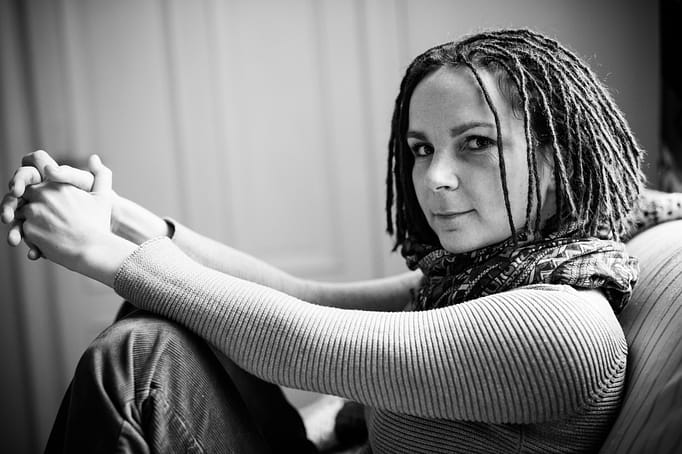 Katrīna Krīgere was hitchhiking through Europe in her 20s when fellow travellers introduced her to veganism. The idea immediately made sense to her. As a child, she’d felt a special kinship with animals, always finding ways to help and be around them.

Upon returning home to her native Latvia, she became a vegetarian, but struggled to go vegan.

“I somehow felt very lonely,” Krīgere recalls, “and at this time in Latvia, being vegetarian was already seen as crazy. I didn’t see any company for me.”

Eventually, she made the jump to veganism, and became more and more involved in animal rights. She was working as a video journalist when she took another huge leap.

“They pushed me to do a lot of commercials, for example, hunting magazines and agriculture magazines. I had to voice them myself and tell these terrible lies.”

Krīgere could hardly bear it. “It really broke my mind,” she says. “I started to get ill very often.”

So with only a little savings to rely on, Krīgere quit to dedicate herself full-time to a two-year-old animal rights organization she’d been running on the side with her partner, Aivars Andersons.

Krīgere’s organization, Dzīvnieku brīvība, or “Animal Freedom,” is one of the only animal rights organizations in Latvia, a tiny post-Soviet country with a population of just two million people. With a focus on industrial animal agriculture, fur farming, and the use of animals in entertainment, Dzīvnieku brīvība has little staff or money. The group has started from scratch in nearly all of its endeavors.

“They’re literally writing the book on this type of work as they go,” Alexandria Beck, with the United States-based Humane League, said in a recent video tribute to Dzīvnieku brīvība.

Despite its challenges, the organization has made a significant mark. It conducts bold investigations, garners significant Latvian media attention, and has won major policy battles. In June, Latvia’s parliament formally banned the use of wild animals in circuses after a long Dzīvnieku brīvība campaign. In a huge victory for the group in December 2017, one of the largest grocery retailers in the region agreed to go cage-free by 2025 after Dzīvnieku brīvība teamed up with organizations in Lithuania and Estonia to pressure the company to improve conditions for egg hens — a victory that will likely lead to more cage-free commitments. And Krīgere and Andersons recently won the Lisa Shapiro Award, which celebrates unsung heroes in the global animal advocacy movement.

Krīgere is brave, humble, and endlessly hardworking. For her, Dzīvnieku brīvība is the realization of a life’s purpose she says she’s long felt. She was in the first or second grade when she undertook a one-girl campaign to help a sick, hungry chained dog who she passed each day on her long walk to school in Salaspils, Latvia.

“I made this poster and I put it on the fence, and of course they removed it,” Krīgere remembers. “But I just continued making these posters and putting them on the fence. I don’t know where I got this idea, but I thought, I have to help this dog.”

Before Dzīvnieku brīvība, Andersons says, there were of course vegans and activists in Latvia, but it wasn’t until he and Krīgere and a handful of friends started the organization that he felt like there was any kind of a local movement. They’d become inspired after attending an animal rights gathering in neighboring Estonia and held Dzīvnieku brīvība’s first meeting in a cafe in 2012.

The organization began its efforts with vegan outreach, and then investigations and targeted campaigns, including circus protests. When a trainer who’d been caught on video badly abusing elephants came to Latvia, Dzīvnieku brīvība couldn’t miss the chance to protest him.

It’s a small place, but you can really change things here.

“This first protest was really quite huge for our country, and then attendees said, ‘What next?’” Krīgere recalls. So they kept going, demonstrating at each of the circus’ more than two dozen shows.

“It made us visible and helped people to know us, and we got a lot of new supporters,” she says. It was enough to eventually win the national ban.

“It’s a small place,” Krīgere says of Latvia. “But you can really change things here.”

Andersons says it is Krīgere who keeps Dzīvnieku brīvība running.

“She’s very persistent and focused,” he says. “I sometimes think of strategies, but I don’t follow things through to the detail. She takes care of things and brings a lot of administrative stuff to the organization, and friendliness, too. She is definitely the friendly face of the organization.”

Krīgere says she has gained as much as she has given.

“It’s a great thing,” she says of activism. “It’s one the best things that’s happened in my life. It’s not only that I’m doing something good for animals and for society — because society suffers from being cruel to animals. But it’s also very good for self-development. I learn so much in what I do.”

Let’s change the world together.

She says she’s loved meeting so many brave women through activism; she estimates women make up about 80 percent of the movement here.

“I think we (men and women) are naturally the same,” she says. “But it’s social programming that we get since we’re born, and it’s very powerful. Here, women are very strong. It’s from Soviet times that mostly the leader of the family is female, actually. So it somehow seems very obvious that females are the ones who are trying to make some change and move males to do something. That’s how it works here. I’m not saying 100 percent, but I see it very often, all around.”

Her hope for the future? That more people, regardless of who they are, will join in.

“Let’s change the world together,” Krīgere says. “There are so many problems. This world is so broken. I wish people would become more aware of how each of us is involved in this broken condition, and how each of us has some power to change it.”

← The Women of Animals Australia The Black Mambas →