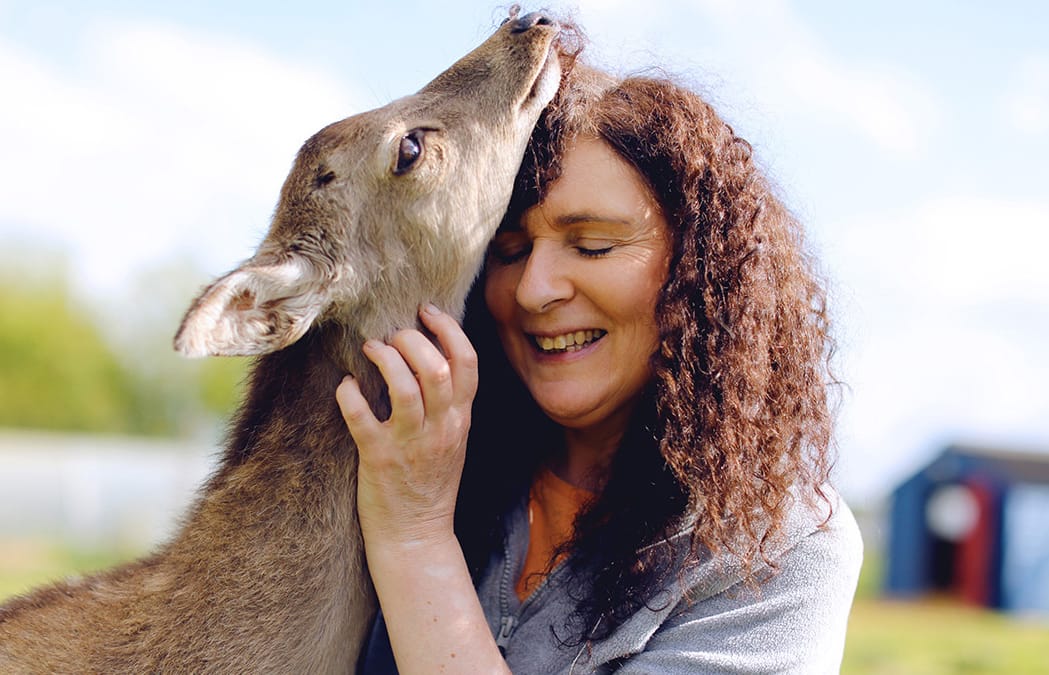 “Culture or tradition or taste or habit – they don’t justify our belief that we can use them as we wish because they are not one of us.”

Sandra Higgins has an easy laugh and a bubbly nature, but talk to her for a few minutes and you’ll quickly realize that she is dedicated, whip smart, and not a woman to underestimate.

Higgins runs Eden Farmed Animal Sanctuary in Ireland, where she manages the day to day operations down to the last detail. Managing a sanctuary is itself no small feat, but Higgins doesn’t stop there –– she’s also running one of the world’s biggest vegan campaigns.

Go Vegan Ireland launched in 2015 and Go Vegan World the year after. Both have been more successful than anyone could have predicted. Anyone, that is, except perhaps Higgins herself, whose quiet determination is apparent when she talks about the campaigns.

“They’re designed to confront us with our own values,” she says of the campaign’s ads, an approach she calls “empathic confrontation.” Many of the Go Vegan billboards feature the residents of Eden. They are combined with messages that, while shocking, are simple, direct, and indisputable: “Dairy Takes Babies from their Mothers,” for example, is one of the recurring messages.

The campaign presents people with the consequences of their choices. Go Vegan World isn’t an anti-farming campaign – Higgins is targeting consumers of animal products to encourage individual members of the public to be personally responsible for the impacts their non-vegan choices have on other animals. “It is irrational to blame farmers, slaughterhouse workers, or other employees of the industry,” Higgins explains. “We’re paying them to do a job we ourselves would feel too uncomfortable to do.” One of the activities of Go Vegan World is supporting farmers to transition to plant agriculture as a more ethical, sustainable, and secure way of living that benefits humans as well as other animals.

We had the opportunity to visit Eden Farmed Animal Sanctuary, and as we walk around the sanctuary, Higgins talked about the campaign and her work caring for Eden’s residents. Following her through the fields and enclosures, it’s clear that she is used to working every minute of the day, but as we pass each pen or coop, she still stops to greet each animal by name and offer some insight into their personality or the story of how they came to be there. We meet Dominic, Angela, Timothy, Aoibheann, and David. George, a pig, clearly holds a special place in Higgins’ heart. “If you saw the delicate way that he eats a raspberry,” she says, not to gush, but rather to emphasize his unique personality and gentle nature. Higgins’ every thought is about how to create – as the name of her campaign indicates – a vegan world for the animals.

Everybody has the common goal of wanting to avoid pain, wanting to stay alive, and wanting peace and some happiness. Every single creature on the face of the earth wants that.

She has a profound respect for animals because of everything we already know about their intelligence and social structures –– but perhaps more importantly, she respects them because of all that we still don’t know about their sentience, behaviours, their motivations, their desires. “I think there’s so much for us to learn about them and from them,” she stresses.

Higgins opened the sanctuary in 2008 and built it up slowly over the course of several years. “I’ve worked hard to get to this day when I could take in bigger animals,” like cows Cormac and Linda, she explains. She believes profoundly in the power of narratives. Talking about the individual chickens and geese and pigs in her care is a totally different angle than talking about the abuses of the industry, she says, and Eden’s literature is filled with stunning portraits and moving stories about the animals in her care.

The vegan guide, part of the Go Vegan World campaign, is a comprehensive, well-designed resource that covers everything from why to go vegan to how to get enough calcium to planning a week’s worth of meals. “I just give people what I wish I’d had when I went vegan,” Higgins says. It’s been a huge success, with requests for copies coming in from all over the world and thousands of downloads every month.

I keep thinking, for every person who writes, maybe there’s a person out there who went vegan and didn’t write.

The campaign as a whole features billboards and transit ads in some of the most visible places in the UK –– entire walls of tube stations, the sides of hundreds of London buses, and an international rugby match (the first vegan campaign to do so). The impact has been profound. Higgins says that prior to the campaign, there was very little visibility for animal rights in Ireland and that it’s succeeding in opening people’s eyes. She receives constant letters and emails from people saying that the campaign inspired them to research the issues or to go vegan. “And I keep thinking, for every person who writes, maybe there’s a person out there who went vegan and didn’t write.”

In a cab one day, the driver asked her “Did you put up the chick ad?” Referring to a billboard that exposes the fate of male chicks in the egg industry (death by asphyxiation or maceration on the day they hatch). “I’m horrified,” he said. “I never knew that.”

And it isn’t only non-vegans who are changing because of the campaign. Seeing the messages on such a large scale has revitalized so many activists, Higgins says. Little wonder, given one of its recent victories –– a win that came, almost unbelievably, thanks to the dairy industry, which inadvertently handed the campaign one of the most significant victories for animals in the UK in years. After the campaign launched, seven complaints – filed directly by the dairy industry – were made to the UK Advertising Standards Agency (ASA), claiming that it portrayed the industry in a misleading light. The ASA reviewed the advertisements, as well as evidence provided by Go Vegan World. It did not go well for the industry. In its ruling, the ASA ruled that: “although the language used to express the claims was emotional and hard-hitting, we understood it was the case that calves were generally separated from their mothers very soon after birth, and we therefore concluded that the ad was unlikely to materially mislead readers.” In effect, the ruling sets a precedent for animal rights campaigners around the world to publicly denounce the dairy industry as inhumane. It’s a game-changing victory that received well-earned worldwide attention.

In reality though, it’s unsurprising that the ads stood up to scrutiny: Higgins designed them that way. They’re not graphic and the messages are facts that are easy to understand. “A lot of people say that the ads are manipulative, but they are stating facts, that’s all. But they’re tugging at people’s empathy. They nag at the moral conviction most of us share: that it is wrong to use, harm or kill another feeling being, especially when we do so to meet our most trivial of needs.”

Culture or tradition or taste or habit – they don’t justify our belief that we can use them as we wish because they are not one of us.

And this is truly the core of her approach. “What I do is leave them no excuses,” she says, describing her method of asking people to relate agricultural and other animal exploitation practices back to their own values. “Terrible things are socio-culturally sanctioned… It was also the culture to beat your wife with a stick no bigger than your thumb. It was illegal to be gay.” Higgins acknowledges that the Go Vegan World campaign doesn’t make people go vegan, but says that it’s goal is to plant seeds for changes about how animal use is thought of in the public discourse. She believes that social change is not only possible, but that it’s coming –– because it’s logical. “Culture or tradition or taste or habit – they don’t justify our belief that we can use them as we wish because they are not one of us.” As we’re leaving the fields to go inside, Higgins interrupts herself to point, “There’s a nest in that house, you can see the birds.” And that’s who she is: advocating for justice on the grandest scale of any campaign to date, but still focused on each animal, treating every individual life with equal worth. “Everybody has the common goal of wanting to avoid pain, wanting to stay alive and wanting peace and some happiness,” she says. “Every single creature on the face of the earth wants that.”