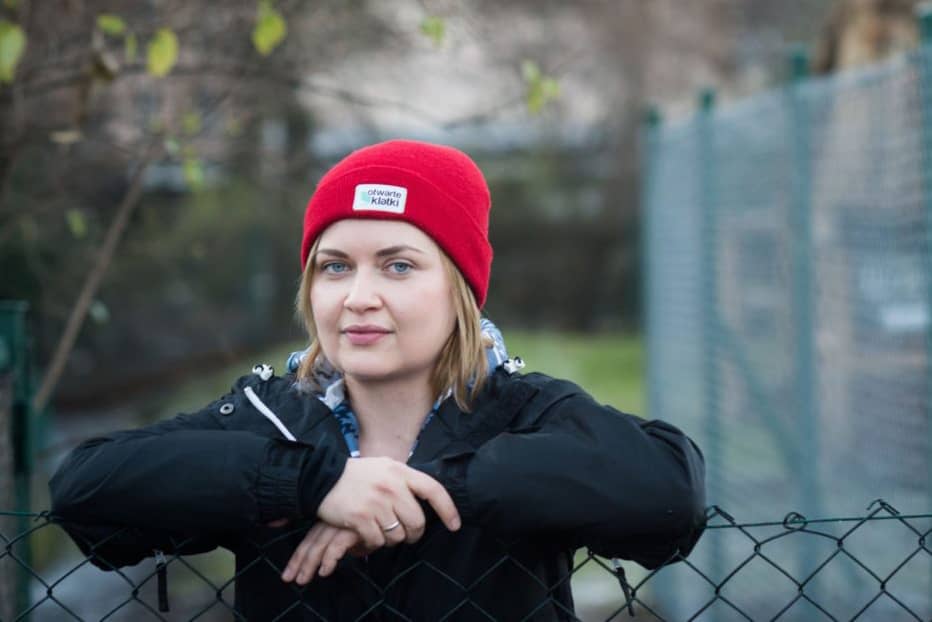 “We are here for an ultra-marathon, not a sprint.”

Dobrosława Gogłoza. All images by Jo-Anne McArthur for the Unbound Project.

It’s a fall day in Poznan, Poland, and Dobrosława Gogłoza is at the local zoo of all places. “It’s my first time in a zoo in many, many years,” says Gogłoza, a feminist and former grade school teacher who now dedicates her life to helping animals. She is here to visit a pair of foxes who were rescued from a fur farm by the national animal rights organization she helped launch in 2012, Otwarte Klatki, or OK (branded as Open Cages internationally).

Gogłoza says she never expected to collaborate with a zoo, but this one has taken an impressive public stance against fur farming, a fight that OK has championed. So when the zoo agreed to house the foxes in a roomy enclosure with plenty of privacy, Gogłoza’s group agreed.

Gogłoza says that one of her favorite things about the animal rights movement in Poland, a country of about 40 million people, is that it’s so new that her organization, which focuses on farmed animals, often finds itself laying new ground. OK has exploded in popularity since its inception just five years ago.

“For me, that’s the whole fun of working in Eastern Europe,” she says. “I feel that in some other countries, many organizations feel like they can’t do some things because people are watching and they expect you to behave in a certain way.”

Here, you can show the way, because there was no one before you.

That isn’t to say that pioneering an animal rights movement here has been easy, and it’s OK’s anti-fur work that has been the hardest.

About two years after the group started, its members learned that spies posing as activists had infiltrated the organization, attending its strategy meetings and feeding information to Poland’s entrenched fur industry, which is among the world’s biggest. The spies—two women—had secretly recorded Gogłoza for months, and although they’d come away with nothing damaging, they used heavily edited audio to personally target Gogłoza to try to intimidate her into quitting as OK’s leader.

The media and public saw through it, but the betrayal still took a toll. Gogłoza felt “paranoid” for a time. She worried about trusting even close friends and about making harmless jokes in case someone was listening.

“I had moments where I felt like I was just going to quit,” she says, tears welling. “I felt that the invasion of privacy was quite a big deal.”

Others with OK­—now with about 300 core activists driving its work—were deeply affected, too. Some wanted new volunteers to sign pledges as to their intentions and loyalty, but Gogłoza objected.

“Even though I personally had problems with trusting people, I felt that as an organization we should not lose this trust, because trusting made us who we are,” she says. “Year after year, I’ve seen that many of the great things we’ve done have been done by people who are very new to the organization. So I think the fact that we actually trusted them made them motivated to show their best abilities and best ideas.”

Ultimately, she says, the experience made her stronger, which is how many who know her describe her.

“I don’t think I was born that way,” she says, “but many different things made me stronger and stronger. Like after this whole thing, I feel much stronger than before. Even though when it happened I felt on the verge of quitting, I think now they would have to do much more to get me to the same point.”

Growing up in Namysłów, a small town in southwest Poland, Gogłoza was quiet and shy. In college, she studied English philology and became drawn to the hardcore straight edge scene, which espouses abstention from drugs, alcohol and animal products. She went vegan and soon got involved with local feminists. But something was missing.

Then a friend invited her to an international animal rights gathering in Oslo. This was activism, she remembers thinking, and she fell in love.

Nothing like what she’d seen in Norway was happening in Poland, so with a handful of others, she started an informal, grassroots group that became OK. Gogłoza continued to attend animal rights gatherings outside of Poland and then decided to host one at home. It was a turning point.

“The movement in Poland before that and after that were two absolutely different situations,” she says.

Besides fur, OK focuses heavily on egg farming and broiler chickens, carrying out investigations and producing virtual reality videos that it leverages to establish dialogues with corporations. One of Poland’s largest egg producers recently declared bankruptcy as a result, and others have adopted cage-free policies.

Gogłoza and OK are “truly the piston for the animal rights movement in Poland,” says Iga Glazewska, who nominated Gogłoza for the Unbound Project.

And OK is at the center of the Network for Eastern European Animal Rights (NEAR), which Gogłoza helped launch in 2013 to advance the movement regionally. NEAR now includes activists and organizations in Czechia, Slovakia, Latvia, Lithuania, Estonia, Hungary, Ukraine, Russia, Belarus, Romania, and Bulgaria.

“We are trying to implement our best practices to work in other countries,” Gogłoza says. “Even if we don’t have big resources, we are still very committed to sharing them.”

Animal industry operates internationally, and we have to do it as well.

She also believes the movement must be diverse. She recently spoke at the Conference on Animal Rights in Europe about the challenges of being a female leader, and about the intersection of animal rights and feminism.

“If we really want things to be more equal for female leaders in the animal rights movement or elsewhere in society, we personally have to do more,” she says. “Every time you succeed as a female leader or woman in the movement doing great work, you’re actually making it easier for other women. It makes me angry when I hear people say, ‘I did not invite more female speakers to the conference because there are not enough professional women.’ I feel that if you organize an event, you’re partly responsible for who you are showing as the spokespeople for the movement.”

Besides her strength, Gogłoza is often praised for being highly strategic. OK is quick to learn from mistakes and drop what isn’t working. It has stopped giving educational talks in schools, publishing an online magazine and using certain social media sites—all because its activists have deemed other uses of their time more effective.

It has also paid close attention to what works best in sharing investigation results. For example, compared to data, OK found it far more effective to reveal to the public that mother foxes on fur farms were so stressed they were chewing limbs off of their babies. The same went for naming individual rescued fox cubs.

This taught OK that its focus should be on telling a cohesive, relatable story.

Gogłoza credits all of this to OK’s structure and culture—flat, accessible, open, unafraid of failure, and unreliant on someone at the top telling everyone else what to do.

With this organization, I could quit now, and it would survive. I think that’s one of my greatest achievements. I know that we are resilient.

“We are here for an ultra-marathon, not a sprint.”

Learn more about Otwarte Klatki/Open Cages and support their work.
Text by Corinne Benedict. Interview and photographs by Jo-Anne McArthur.